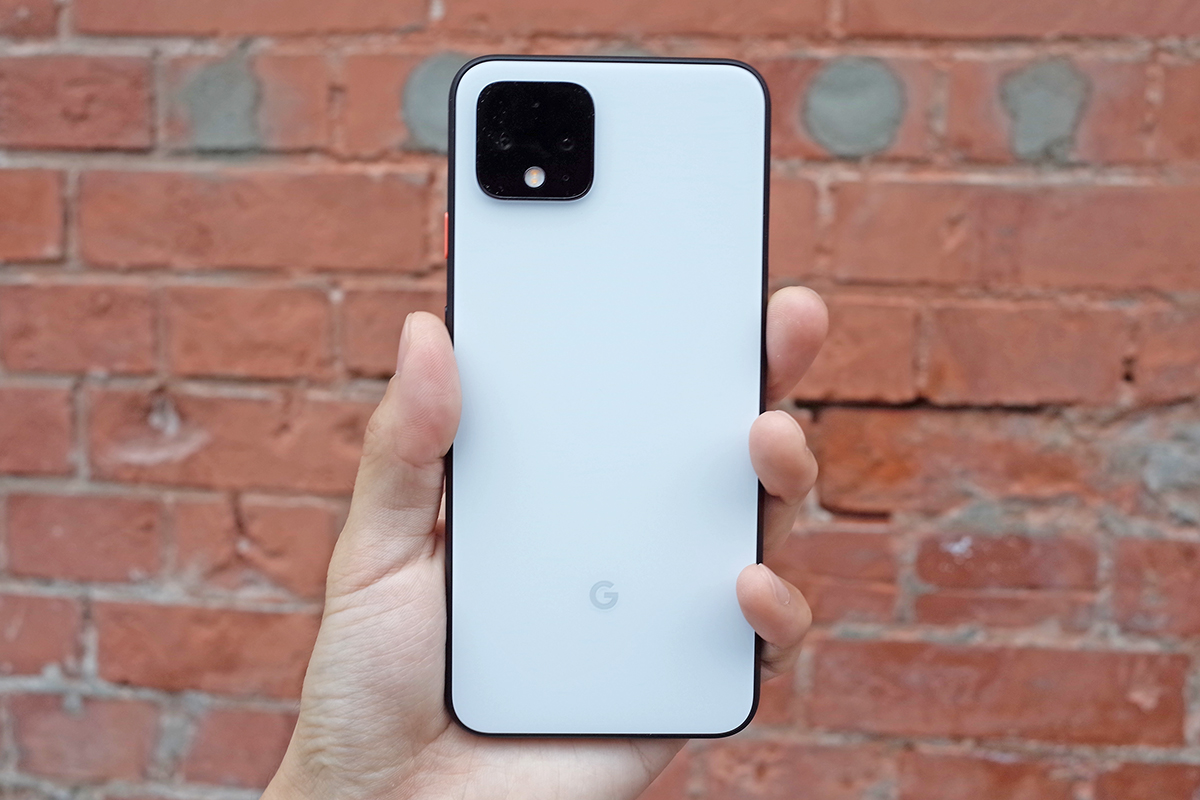 Google is launching a new smartphone "Pixel 4" on October 24. I got a chance to review it before it went on sale, so here are my impressions after using it for a few days. The Pixel 4 series comes in 5.7-inch "Pixel 4" and 6.3-inch "Pixel 4XL" variations, but I tested the smaller Pixel 4 with the color Clearly White.

Design that looks like it came out of a toy box

I don't know if it's a Google-esque expression, but it's a combination of orthodox materials that gives it a whimsical feel. The Pixel 4 comes in three colors: Clear White (Obviously white), Just Black (It's black), and Oh So Orange (Very orange). 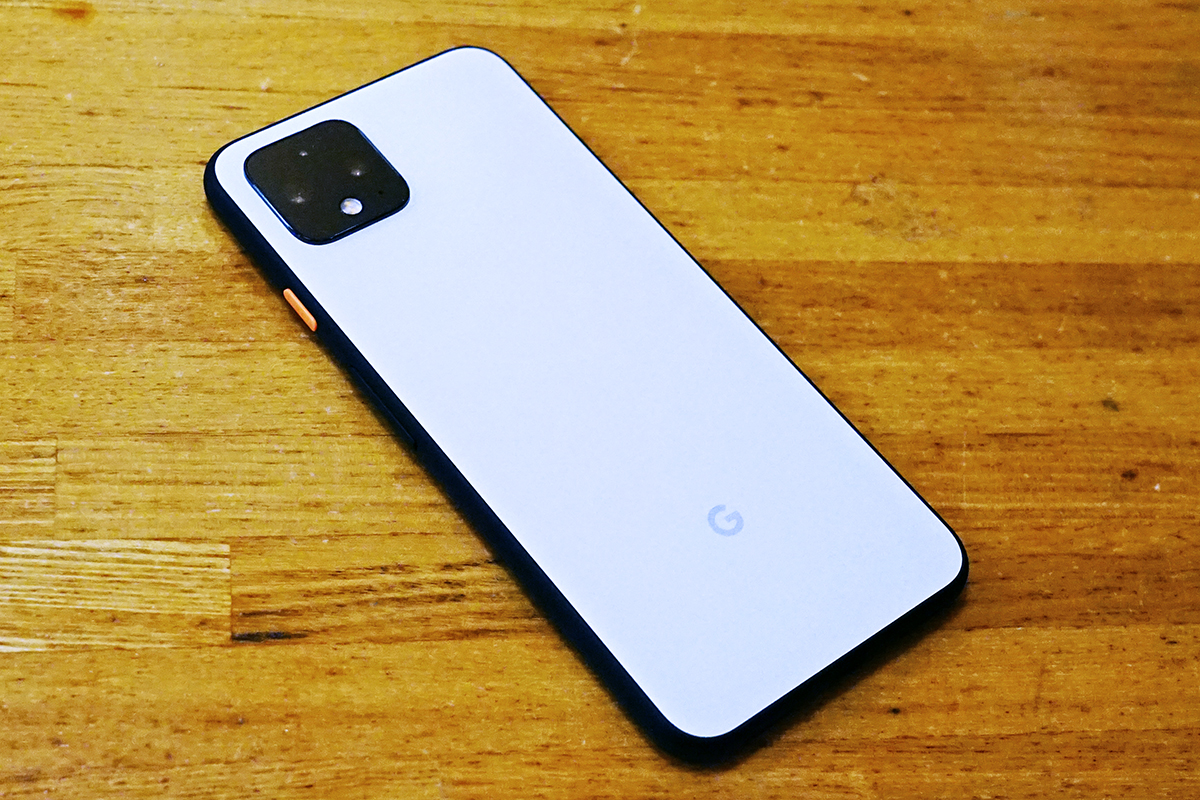 The side frame of the Clearly White is a combination of matte black. The power button is accented with orange. If you look at the black frame that surrounds the four sides of the back. It is reminiscent of "Rice ball" and make me feel happy somehow, maybe because I am Japanese. The design, including the home screen, is somewhat exciting, as if it came out of a toy box. 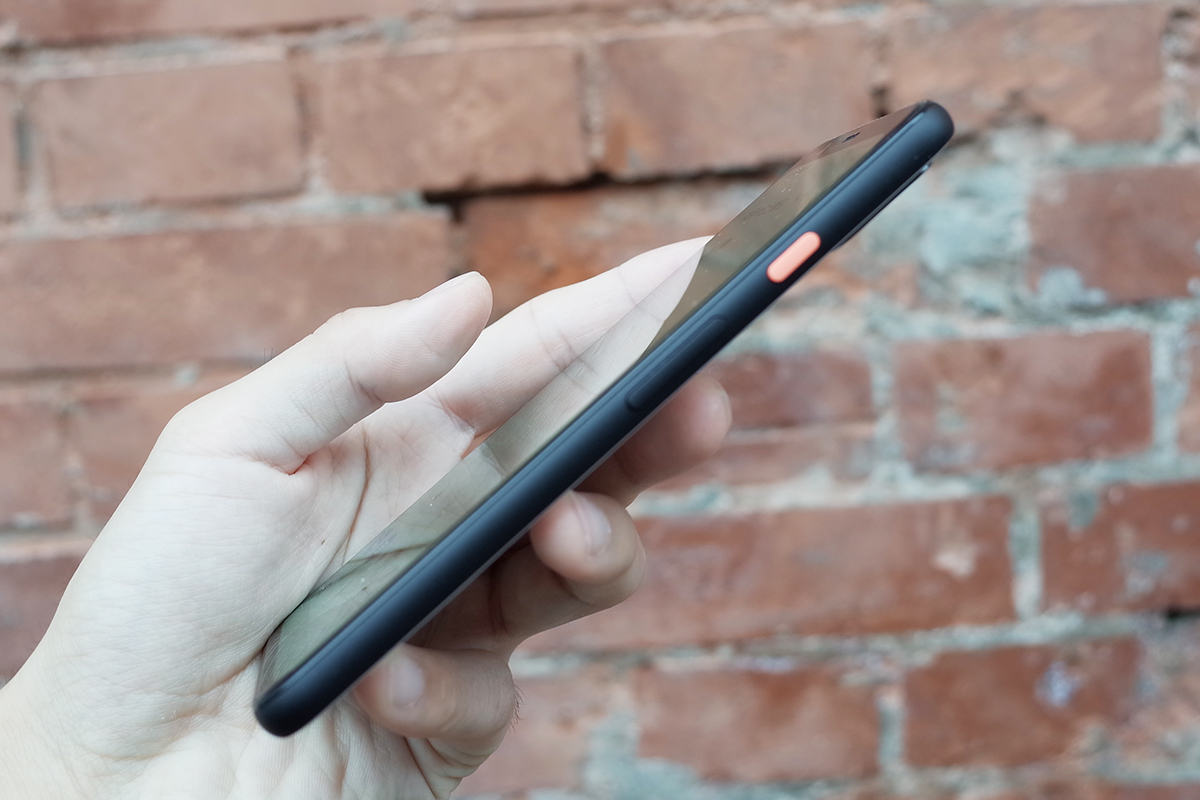 On the back, you'll notice that the dual-camera unit is sticking out. It's a popular design among modern smartphones, including the iPhone 11 Pro, but I'm a little worried about the instability when I put it on the table and whether the camera unit gets scratched by something else.

That said, the design of the phone's back doesn't seem to matter. Pixel 4 comes in a genuine fabric case with a unique feel. When combined with this case, the back camera's bulge will be neatly embedded, and the color combination on the back that makes you a little nervous will be hidden, so you can use it with peace of mind. 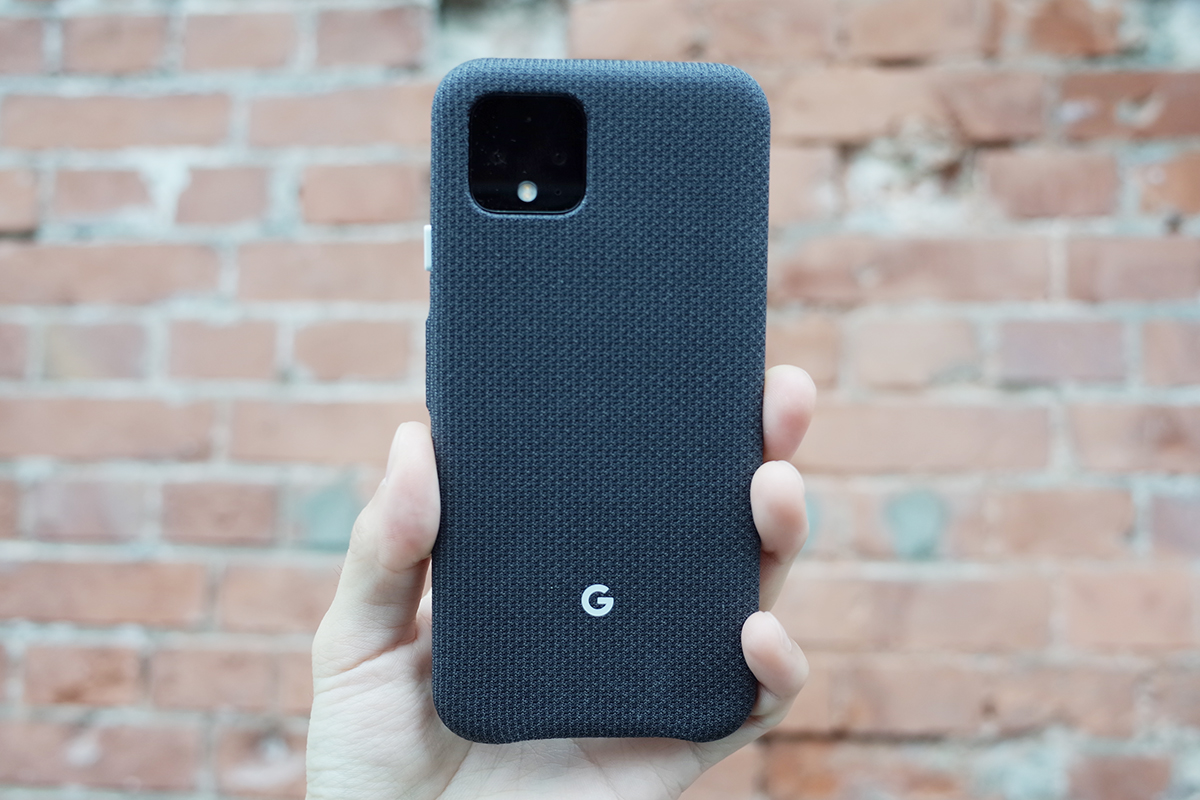 The screen is moved to the bottom

In contrast to Pixel 3, Pixel 4 has a screen that expands to just the bottom edge. This is a reasonable change considering the new operating system introduced in Android 10. 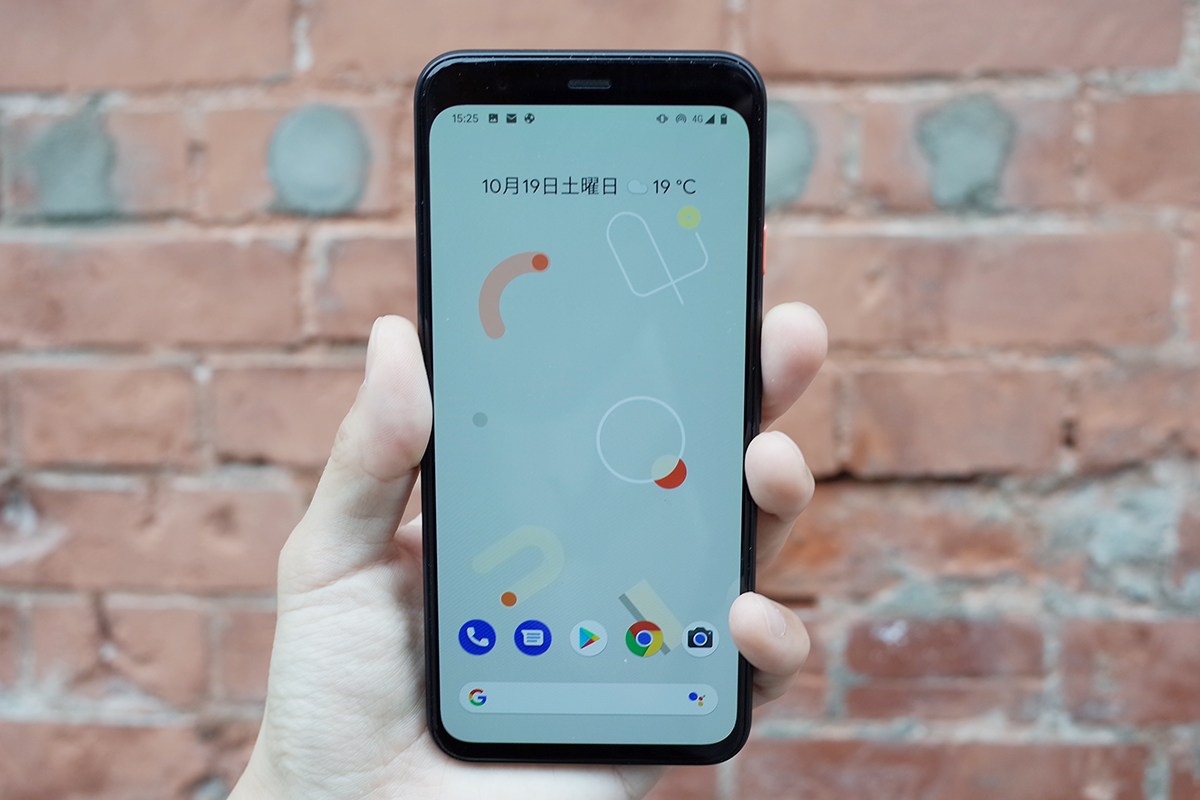 Gestures in Android 10 are, after all, "iPhone bias". It's similar to what Apple introduced with the iPhone X, for example, you can swipe up from the bottom edge of the screen to return to the home screen. Swipe up and slide left and right to see the app history.

In addition to tracing the iPhone, there is also a section with more useful customizations. For example, you can swipe up on the app history list to see the list of installed apps, or you can simply slide the "Return" key from the right edge of the screen to the left. It is a more advanced "iPhone X-style" operating system.
Reference: Android 10 Review: Building the Foundation for Future Smartphones
In Android 10, it's easier to use a display that extends to the bottom edge. It is reasonable considering the usage situation. The change, however, causes the bezel to concentrate on the top, leaving the front of the Pixel 4 clunky. Instead of a notch shape, it packs in an in-camera and speakers, leaving a thick black frame at the top. It looks just like an okappa hairstyle and emphasizes the humorous design.

I can't complain about basic physical strength as a smartphone. The Pixel 4's 5.7 inch OLED display is as beautiful as it sounds, and when paired with Android 10's dark theme, it's even more comfortable to use.

The best part is that it supports high-speed 90 Hz operation. In a scrolling scene, such as on a website or on Twitter, the screen looks much better. I'm sorry that I can't tell you in the picture, but I recommend you to feel the smoothness when you touch the actual machine. It's said that increasing the speed of the display can reduce the battery, but even if the display is set to run at 90 Hz all the time, the battery lasts as long as one day without recharging. 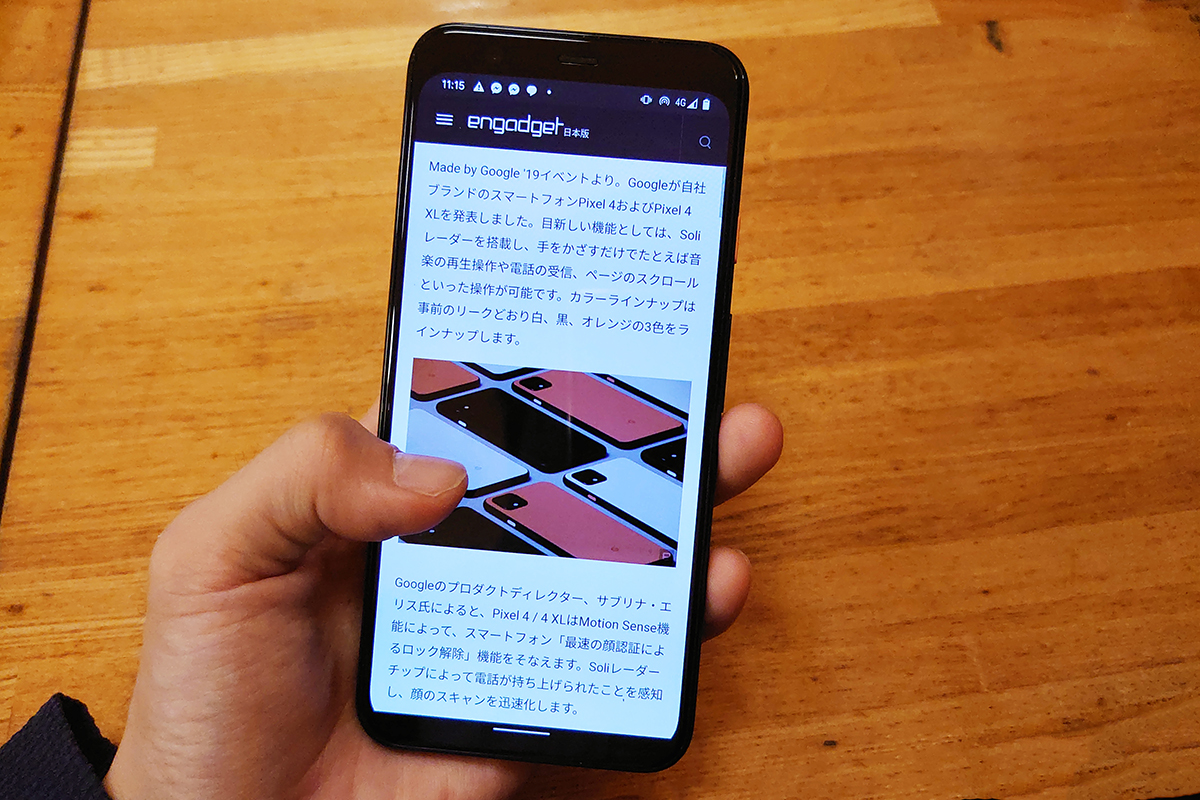 It's got a Snapdragon 855 chipset, 6GB of memory, and it works just fine. Starting up the camera and displaying the Pokestop in "Pokémon Go" was smooth, and there was no scene that I felt insufficient in using it.

There are 64 GB and 128 GB of storage available, but considering that it doesn't support microSD cards, you might be better off choosing 128 GB even if it costs just under 15000 yen more. 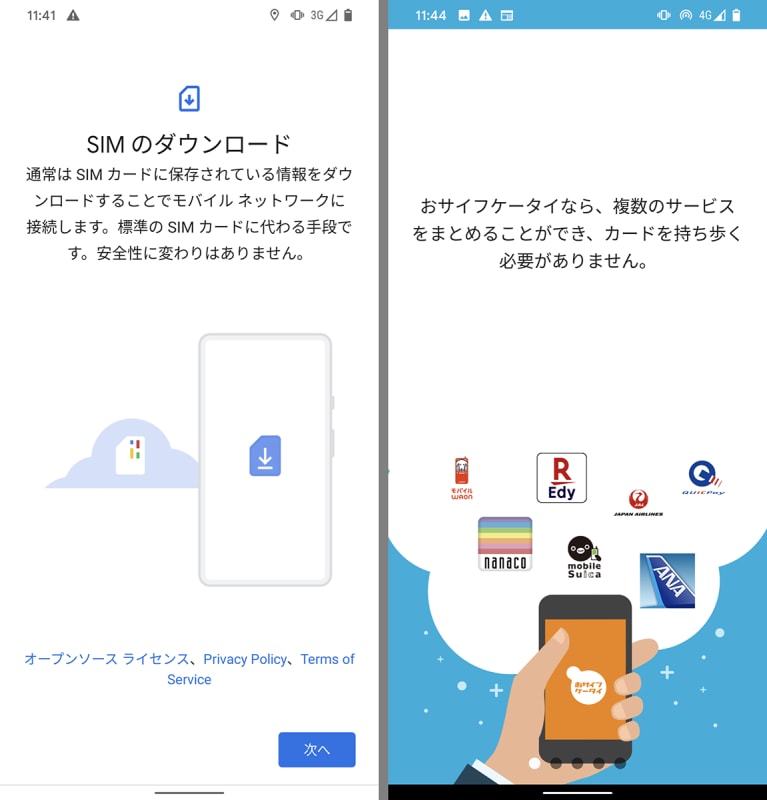 Also, as an improvement over Pixel 3, the Pixel 4 now supports both eSIM and FeliCa (Osaifu-Keitai). The Pixel 3 only supports FeliCa in Japan and eSIM outside of Japan.

eSIM is standards-compliant and works with the same services as Windows and iPhone (You can use the Softbank version after unlocking the SIM.).

Since eSIM can be used as a secondary line, you can save the communication charge by inserting SIM of a domestic carrier for the mainline and using eSIM for the local overseas.

Currently in Japan, eSIM services are only available to some carriers, such as IIJ, but with the Pixel following the iPhone, options are likely to increase in the future.
Reference: Check out the IIJ's "eSIM": How does the iPhone feel to use dual SIM?

The camera with solid evolution

Cameras are not discussed in detail in this review. We are preparing a more detailed verification article, so please wait for it to be published.

I'm using the Pixel 3a as one of my main devices, and if I give it a quick spin, the Pixel 4's camera certainly feels better. The camera's user interface has also been revamped, allowing you to control exposure independently for bright and dark areas. It is easy to take a picture you want.

Photographs taken in dusk and after sunset clearly identify the color temperature of multiple light sources, and the areas where white flight is likely to be suppressed. In terms of color temperature, I felt that it was better than the Pixel 3a photo. 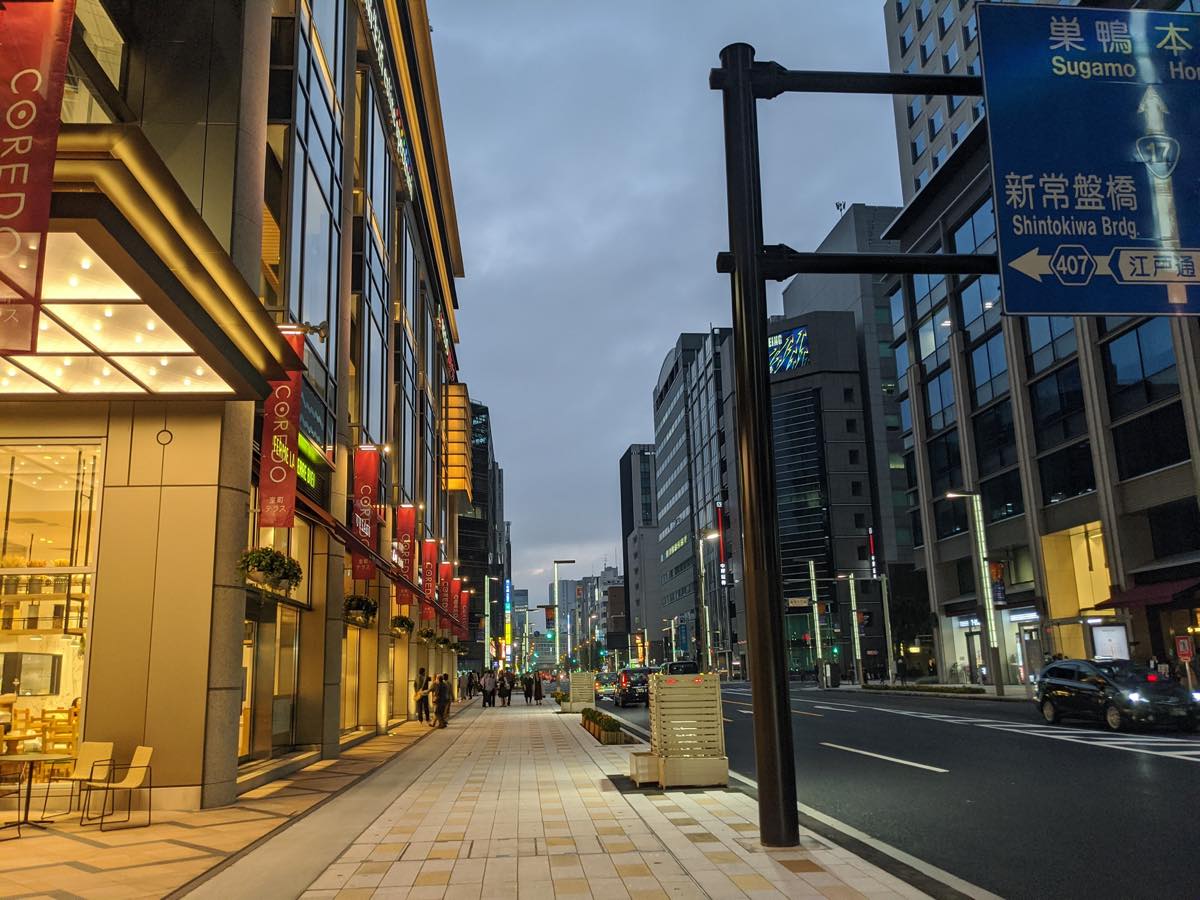 There's also a lot of progress in low-light performance. The incredibly powerful night mode from the Pixel 3 series is still alive and well, and you can see how it can be used to take photos in virtually no light. We've only tried a few shots so far, but they're quite as good as the iPhone 11 Pro. 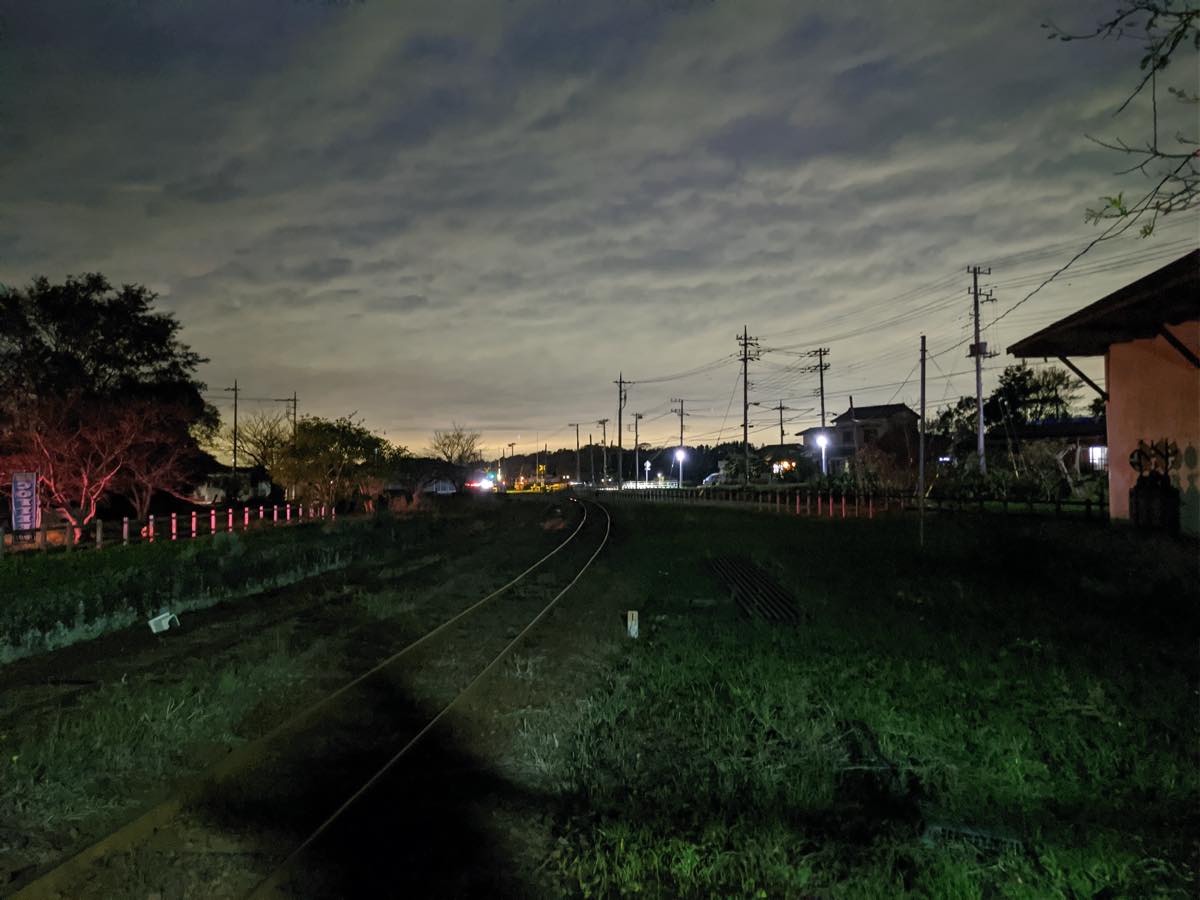 In the case of super-resolution zooming, we can clearly see the evolution by comparing photos taken when zooming to 8 times the maximum magnification. Pixel 4 is the first Pixel to use a dual-camera system, and it's definitely the best. 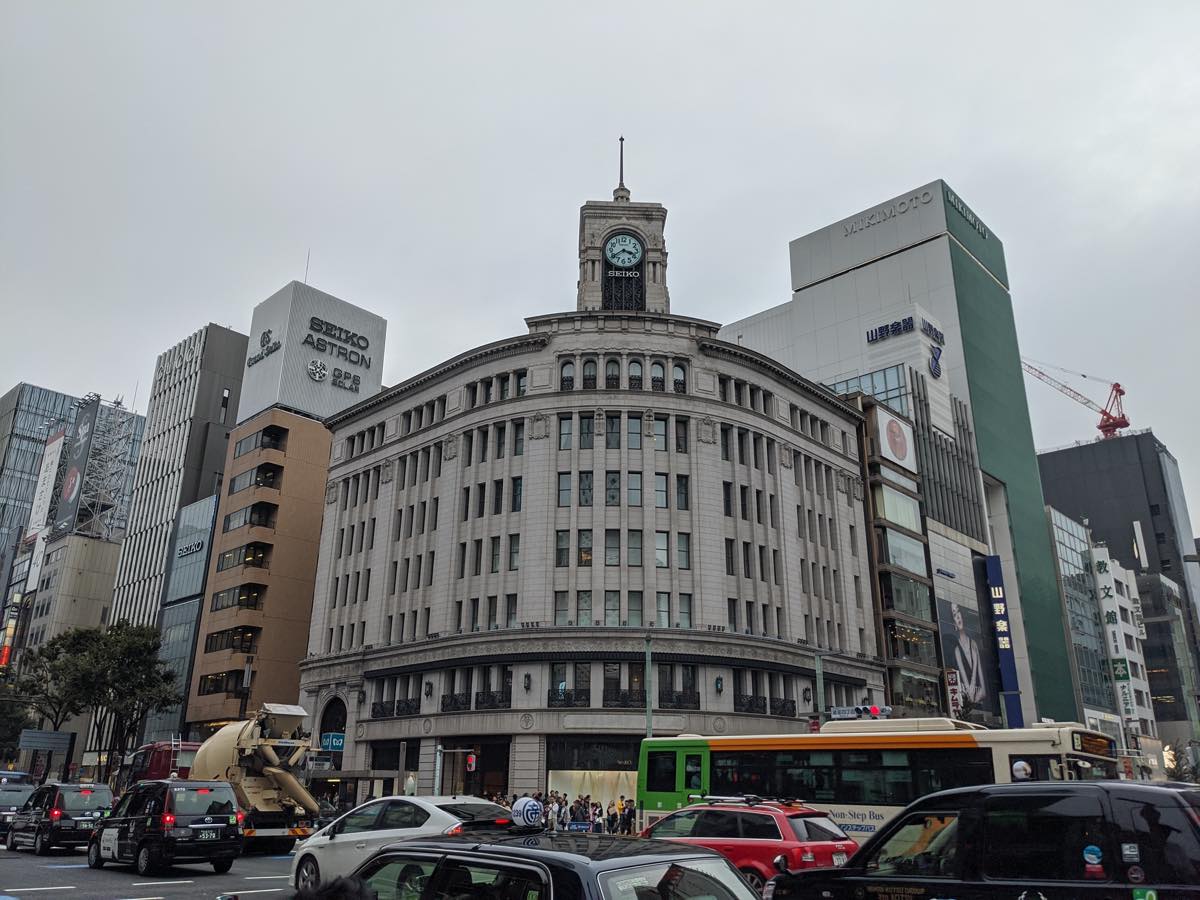 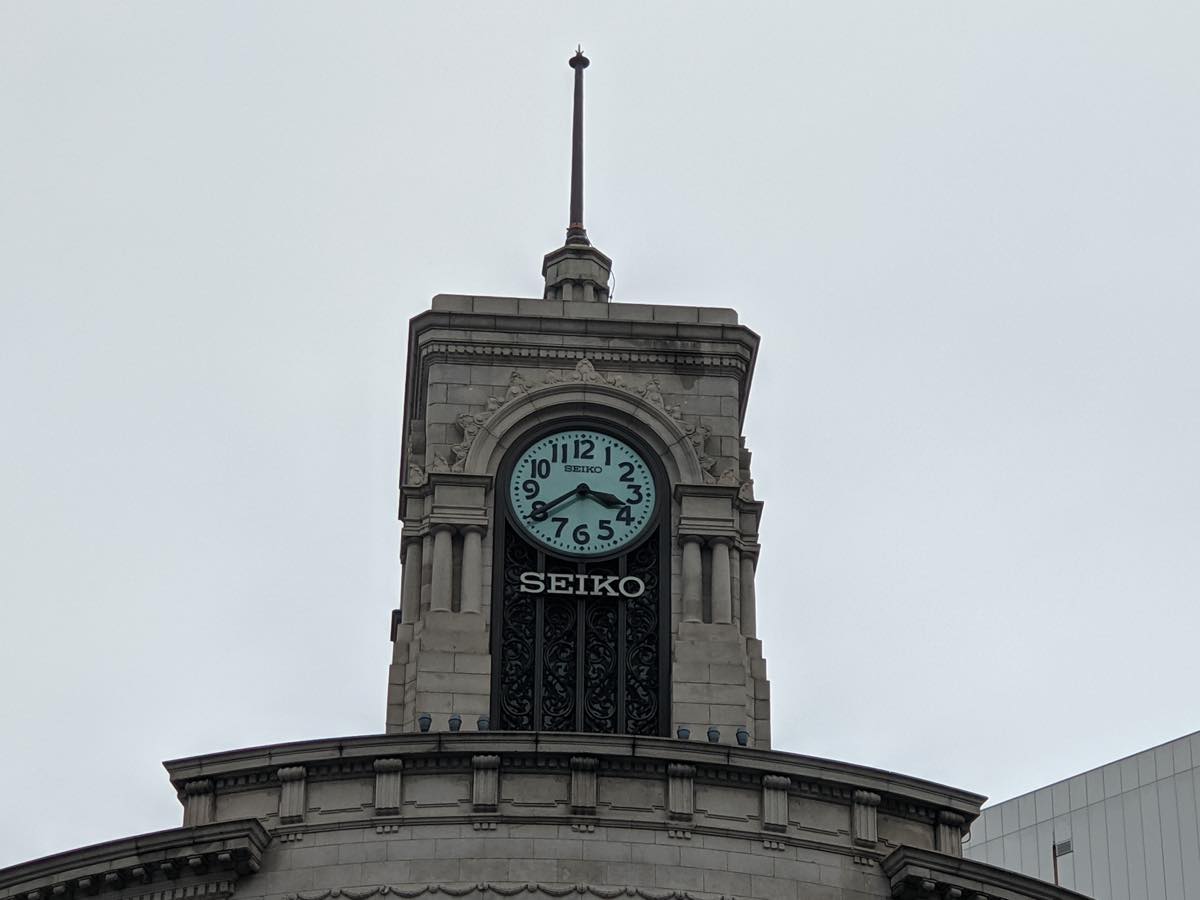 Portrait mode is also more advanced, and as far as I can tell, it detects subjects more accurately than the Pixel 3a and adds blur. Not only does it capture people beautifully, but it doesn't make an "only person is blurred" photo. It's an algorithm that accurately recognizes the positional relationship between people and objects in the background and adds natural blur. 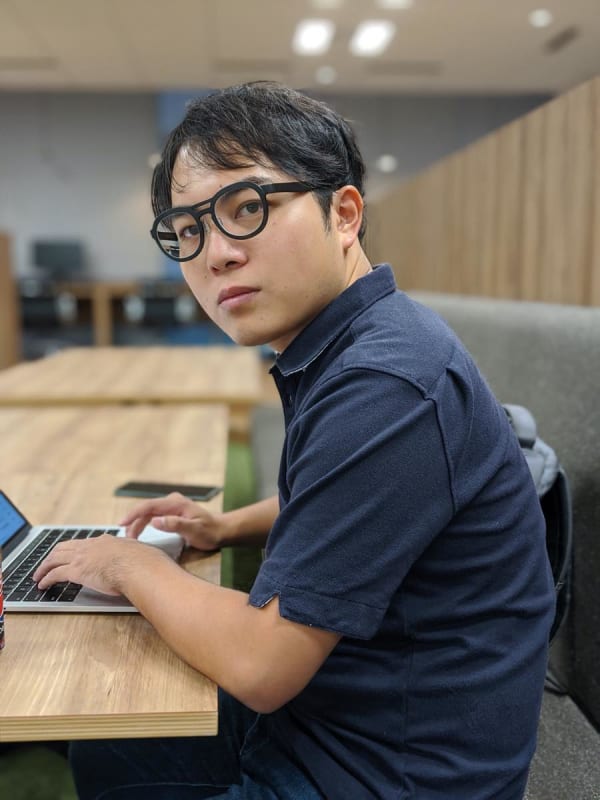 ▲Shot in portrait mode on Pixel 4. And you can see that they're recognizing people and the computer together, adding a blur.
＊For the convenience of publication, the example has been reduced to 1200 pixels on the long side.

The Pixel 4 has removed the fingerprint authentication that was present in the previous 3 series. Instead, Google is touting facial recognition as a fast way to unlock your phone.

However, this facial recognition feature has a fatal weakness: "even with one's eyes closed". For example, Someone can unlock your phone at high speed when you are asleep or when you are in a faint.

Of course, fingerprint recognition can unlock your phone while you're asleep, but I wish it had a gazing feature like Apple's FaceID. The Pixel 4 is a premium phone in the same price range as the iPhone 11, starting at 90,000 yen.

Related article: Pixel 4 can unlock your face with your eyes closed

One of the most critical weaknesses of Pixel 4 is the lack of a feature that was highlighted at the launch event.

The first is the "Motion Sense" function, which is equipped with a radar sensor that took five years to develop. You can unlock your phone with face recognition by simply reaching over your phone, move your hand to the next song, or snooze the alarm. 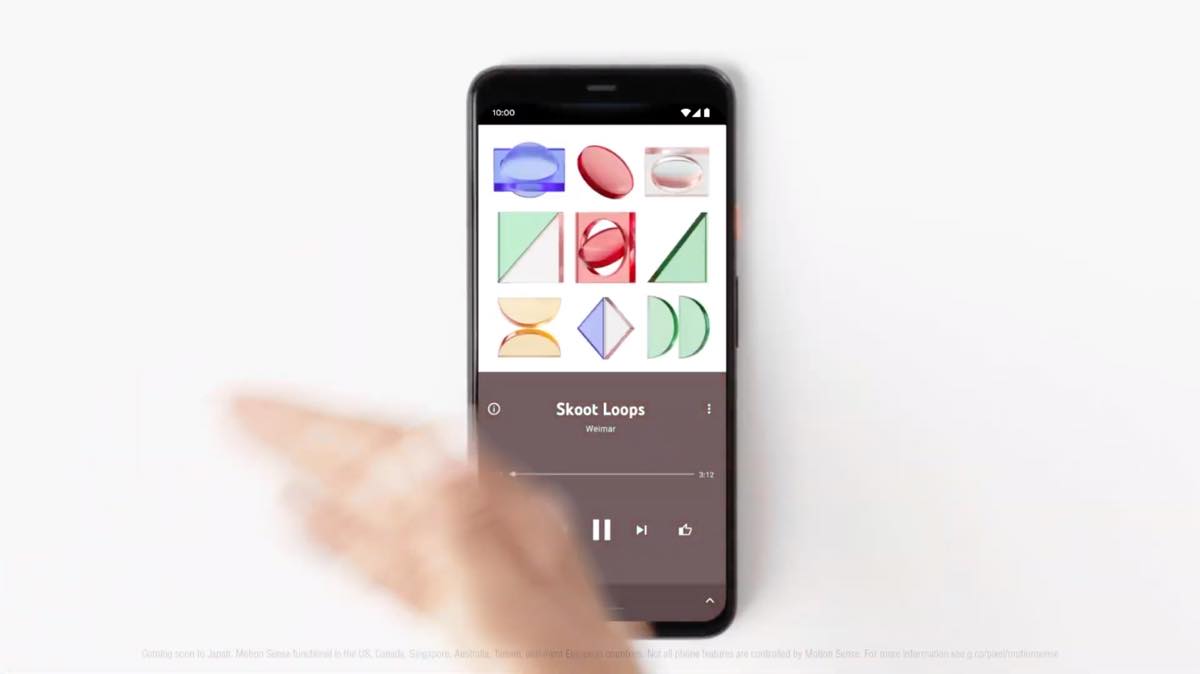 Prior to testing how practical this feature is, Motion Sense will not be available at launch "Japan only". Google plans to make it available in the spring of 2020. To activate the radar sensor, it needs to obtain a Japanese certificate, and I understand the reason why it is postponed, but it is a pity that it cannot be used when it is launched.

"Google Assistant Lets You Talk Naturally To Do More Tasks" coming in spring 2020. In addition, the "Offline voice transcribing" included in the voice recorder is available only in English at the time of release.
Related articles:
Pixel 4 has a swipe gesture "motion sense"
Pixel 4 ' s new voice recorder can auto-transcribe text
If you're looking to upgrade from the Pixel 3 series, you probably don't need to do that in the sense that the only positive reason to buy it at launch is the camera.

While Pixel 4 has some drawbacks, including a design that seems to be a bit of a mixed bag, biometric identification, and lack of eye-catching features, the camera's evolution and improvements in basic fitness make it a more palatable device. If you have a clear purpose like a camera or eSIM + FeliCa, you won't regret buying it.

However, I don't think it's attractive enough to buy it for 90,000 yen at the time of its launch.

It's not too late to buy a smartphone now that Google is rolling out more features for the Japanese market, because smartphone prices generally start dropping after the launch date. Or maybe you just want to buy it on launch day and get the fun of waiting for features to be added.

If you pre-order the Pixel 4/4 XL by October 24, the Google Store will give you a coupon worth 16000 yen and a USB-C earphone jack adapter. If you use this campaign, the impression of "expensive" may be softened a little. 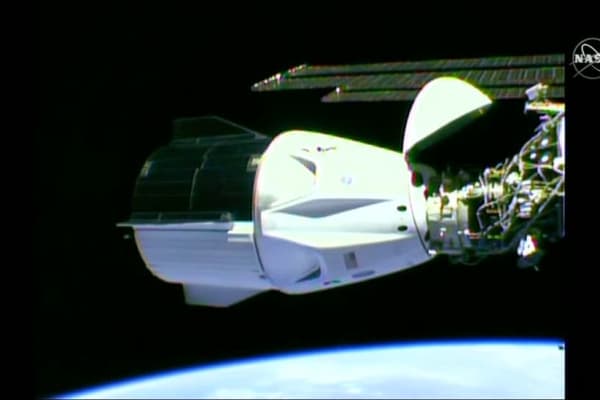 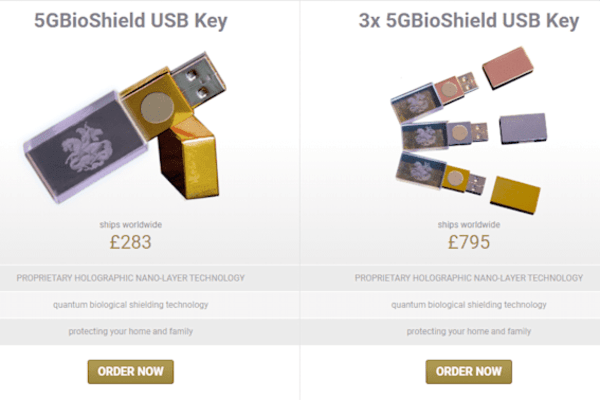 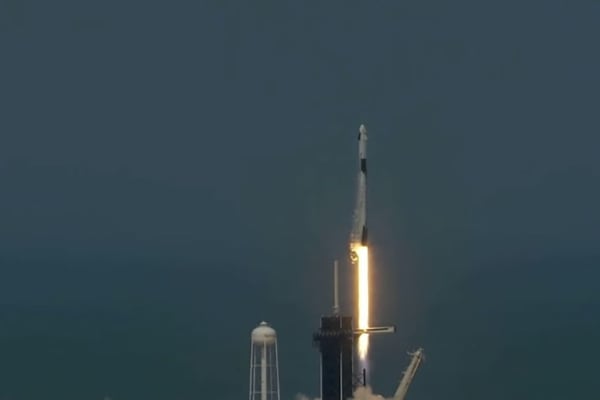 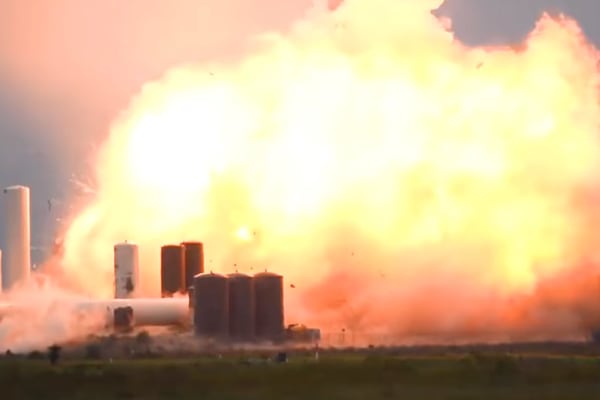