The 5 best electric hot pots under 30,000 yen that you can buy and may change your life

They are all affordable, but have the potential to drastically change your dietary life.

Ever since the new coronavirus scare made stay-home a recommended option, electric pressure cookers have been getting a lot of attention. Let's take a look at models under 30,000 yen that are relatively affordable but have the potential to completely change your eating habits. Tap on the bold text and images in the article to go to the Amazon product page.

Iris Oyama PMPC-MA4 can be enjoyed as a tabletop pot 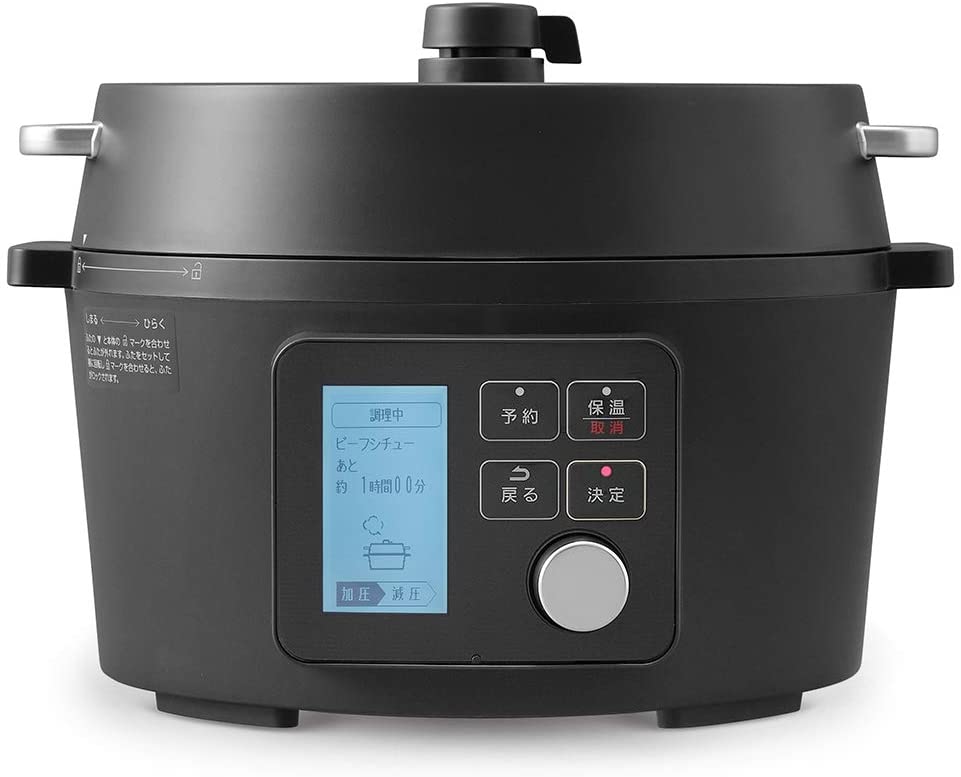 The PMPC-MA4 is priced at 19,412 yen. It is an electric pressure cooker with a capacity of 4 liters (cooking capacity of 2.6 liters) that can cook for three to four people at approximately 1.7 atmospheres of high pressure. 90 automatic menus are available, and the full-dot LCD screen displays various information such as the menu, cooking time, and operation methods, and can be operated with knobs and buttons.

Manual menus such as pressure cooking, temperature cooking (70-100°C), anhydrous cooking, steaming, and cold/fermentation cooking (30-70°C) are also available. For a lower price, it also has a reserved cooking function (which can be set up to 12 hours later) that cooks the food immediately after starting and reheats it when it's time to get it to the right temperature. There's also a pot mode that can be used as an electric pot with the lid open, and this model, which is only available online, also comes with a glass lid for the pot. 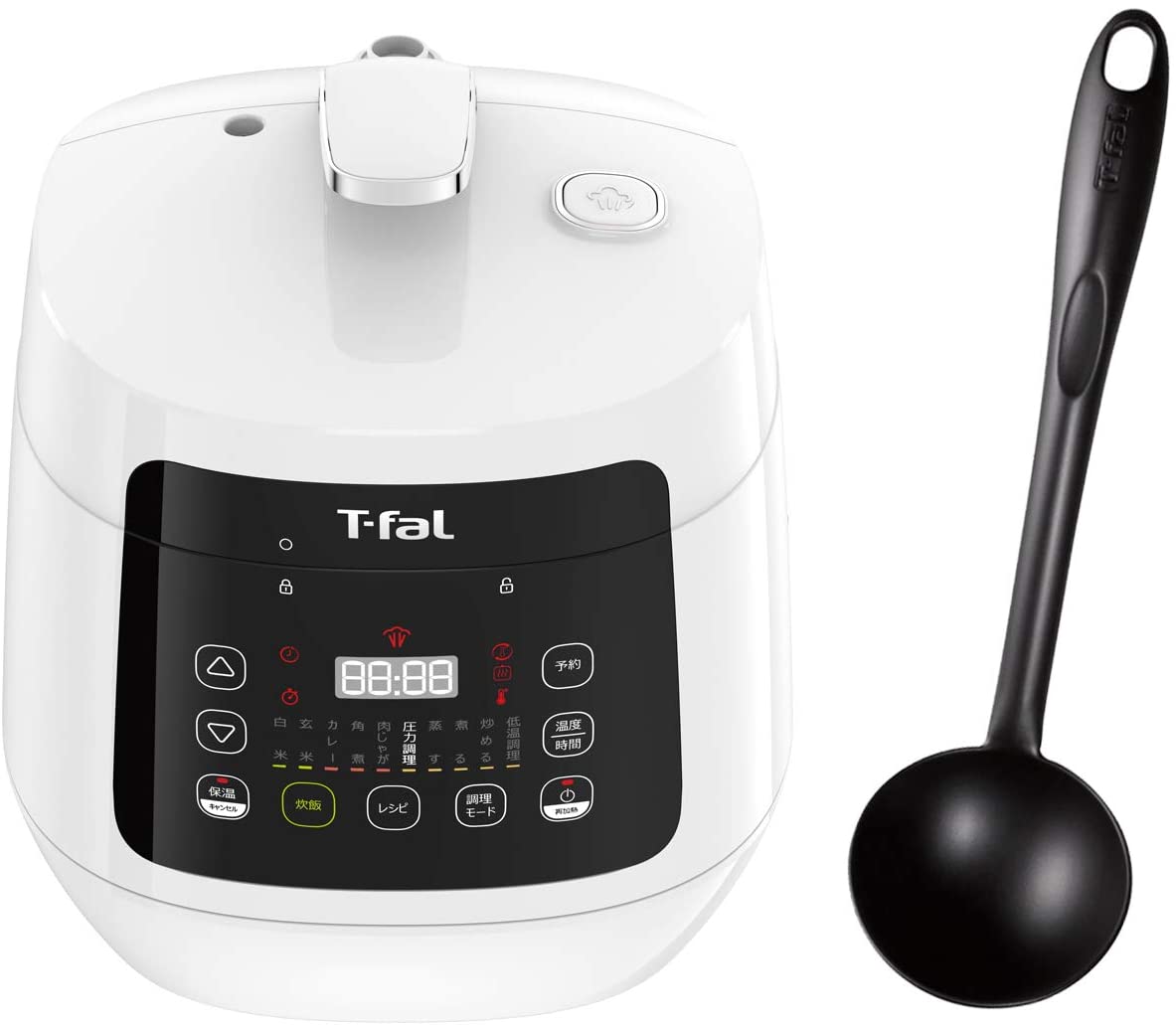 The Lakula Cooker Compact is priced at 21,780 yen. This electric pressure cooker is equipped with the ability to pressure cook at approximately 1.7 atmospheres, as well as a low-temperature cooking function that allows you to set a timer from 58 to 90 degrees Celsius for up to 22 hours. It has three recipe modes - curry, stew, and meat and potatoes - which can be easily set at the push of a button, as well as two rice cooking modes - white and brown rice, and five cooking modes - pressure cooking, steaming, simmering, frying, and low-temperature cooking - which can be reserved up to 12 hours later (it is not compatible with cooking raw meat, raw fish, raw eggs, raw seafood, etc).

It also has a function to keep the food warm for up to 24 hours (not supported by the "1"), and a reheat function (3 minutes). Its capacity is small, at 3 liters (2 liters of cooking capacity), but its compact size, about 260 x 285 x 283 mm, makes it relatively easy to place in a small kitchen.

Panasonic SR-MP300 is easy to clean and maintain 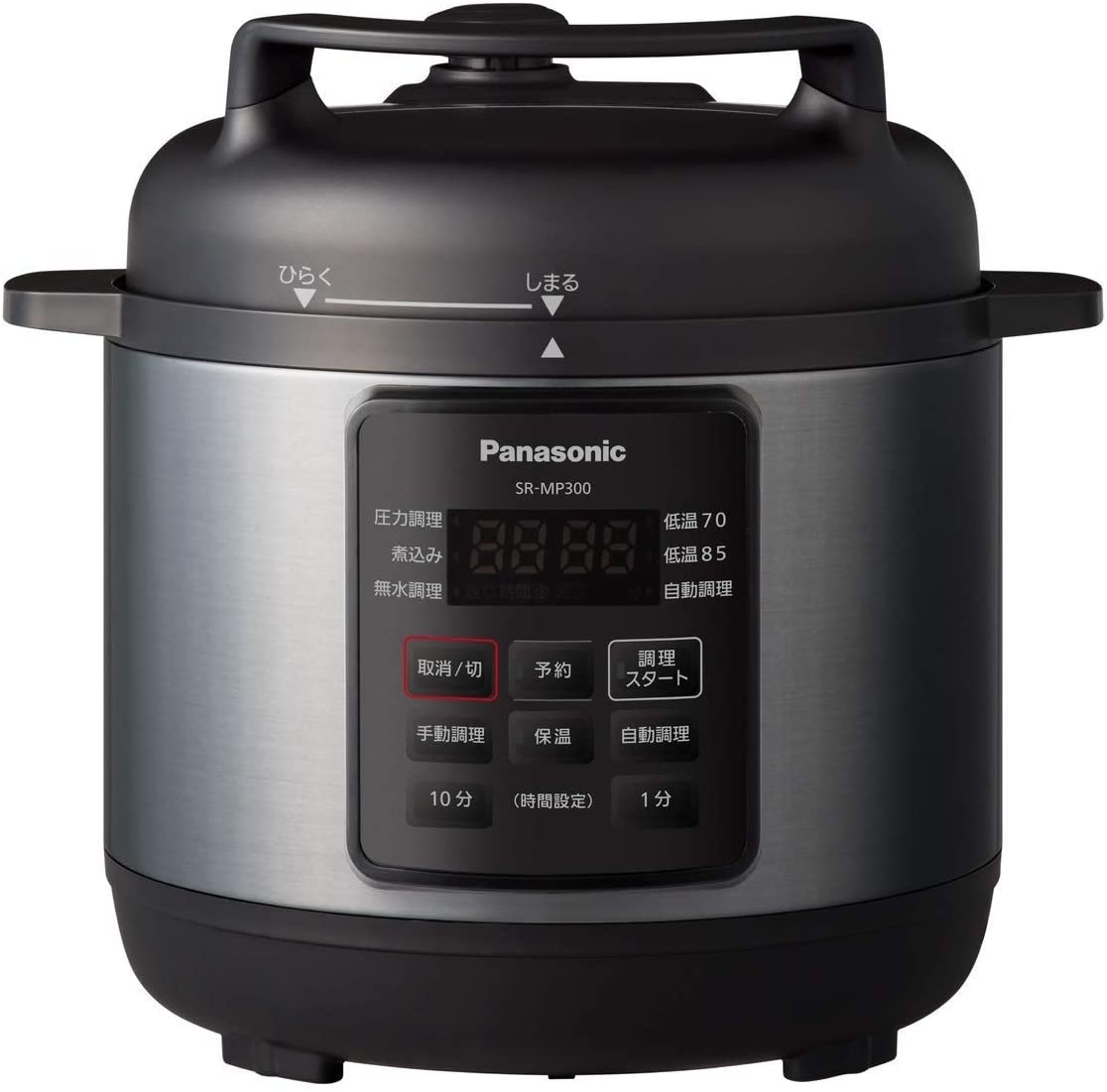 The SR-MP300 is priced at 23,755 yen. It is an electric pressure cooker with a capacity of 3 liters (cooking capacity is 2 liters) that can cook at a high pressure of about 1.7 atmospheres. It has seven automatic cooking menus: curry, simmered meat and potatoes, braised cubed pork, healthy soup, brown rice, black beans, and amazake, and has manual cooking functions such as pressure cooking, stewing, anhydrous cooking (a cooking method that uses only the moisture of the ingredients and seasonings), and low-temperature cooking (two levels of 70°C and 85°C).

It is a pity that the low-temperature cooking has only two stages, 70°C and 85°C, but the lid can be removed and washed, so the main attraction is the ease of cleaning. In manual cooking, the cooker stops heating after a set amount of time from boiling or pressure, and is done when it steams and the pressure indicator pin drops. It is not a style that relieves the pressure by itself (forced exhaust is also possible), so you can use it safely.

Zojirushi EL-MB30, which allows the flavor to soak in with gentle pressure 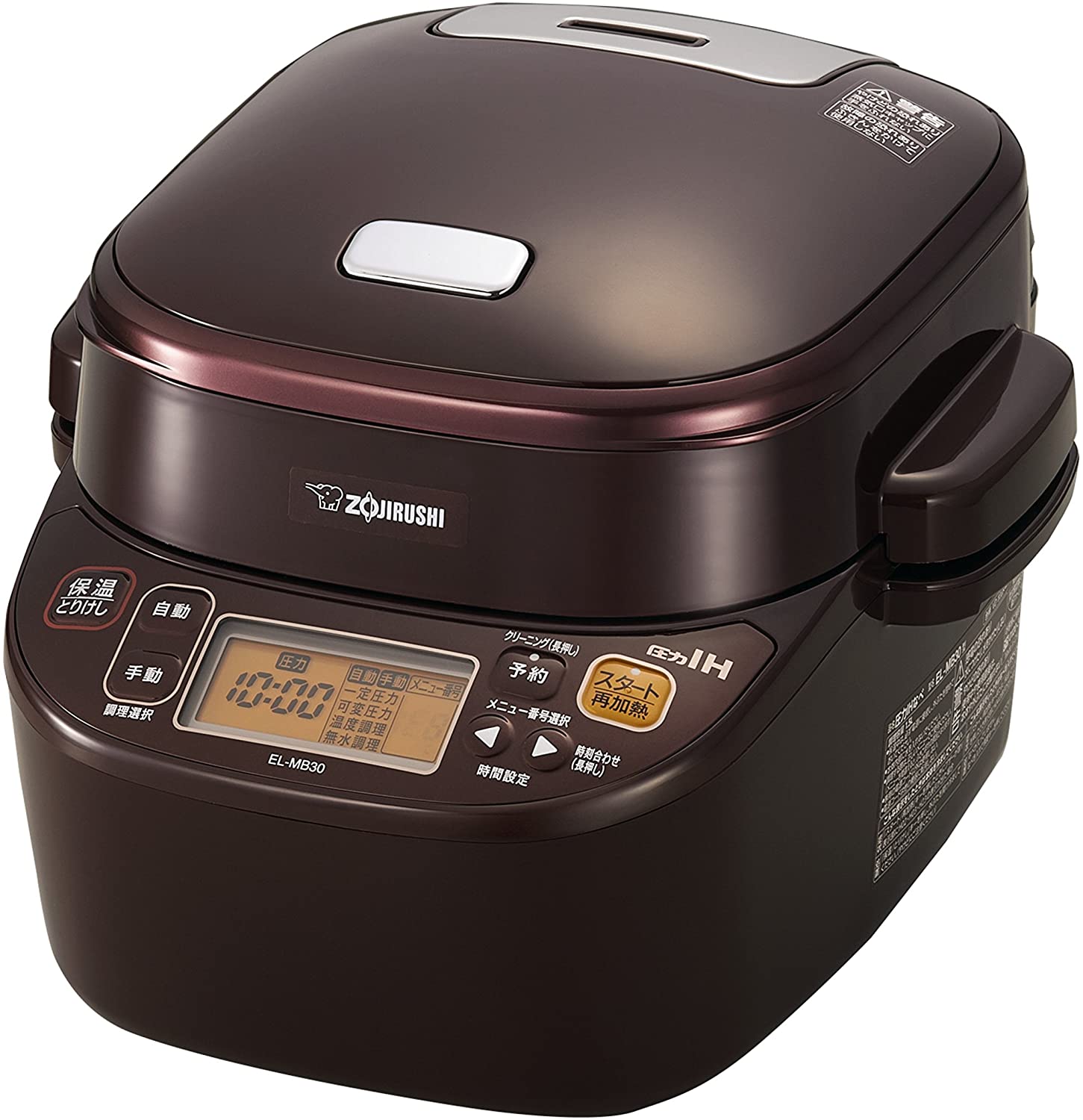 The EL-MB30 sells for 24,320 yen. It is an electric pressure cooker that cooks at about 1.2 atmospheres, a lower pressure than the competitors. The concept of this model is to cook boiled fish and other foods gently without spoiling them, and it features a "constant pressure" mode that prevents seafood and vegetables from being spoiled, and a "variable pressure" mode that allows the flavors to soak in by repeating the pressurization to 1.2 atmospheres and the depressurization to 1 atmosphere.

In addition to the pressure cooking mode, there is also an automatic cooking mode with courses for white rice, brown rice, okowa, noodles, and bread (fermented and baked), and a temperature cooking mode that allows cooking from 40 to 100 degrees Celsius in 10 degree Celsius increments.

Instant Brands Nova Plus 6.0L with a full range of international recipes 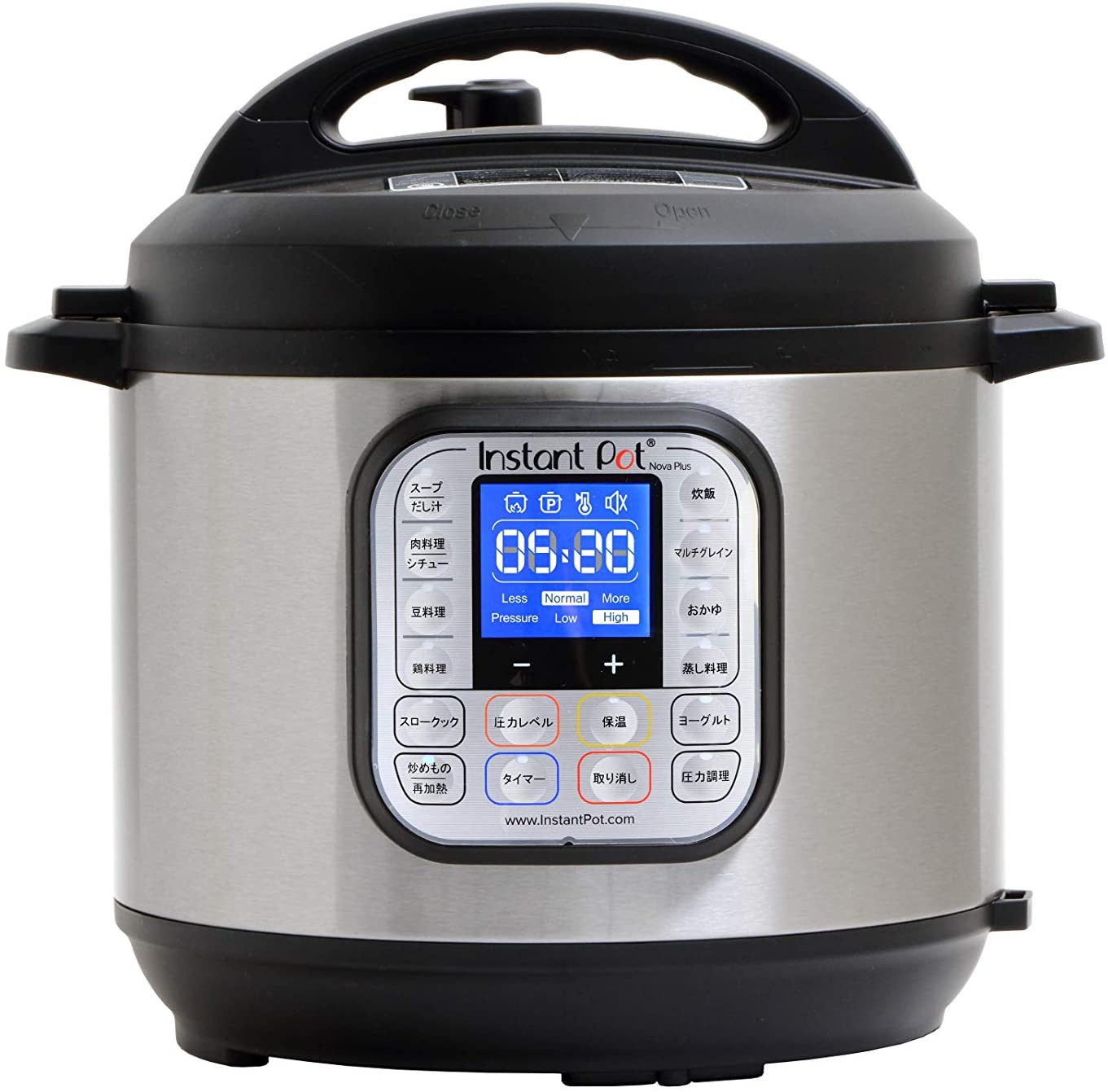 The Nova Plus 6.0L is priced at 14,152 yen. It is an electric pressure cooker with nine functions in one, including pressure cooking, stir-fry cooking/reheating, rice cooking, steaming, yogurt, slow cook, multi-grain, chicken cooking, and heat retention. This is the officially imported model of the hit series, which sold 215,000 units in one day of Amazon's Black Friday sale in the United States in July 2016.

It doesn't have an automatic cooking menu like Japanese manufacturers' cooking appliances, but you can manually set the cooking temperature and cooking time. It takes some getting used to, but the point is that once you learn how to use it, you can use it just like a cooking tool. As a model that was a big hit in North America, if you search for "Instant Pot" in the Kindle Store, there are more than 5,000 recipe books (in English), and you can make use of many foreign recipes.