Or how did I stop worrying and come to love individual value checking? 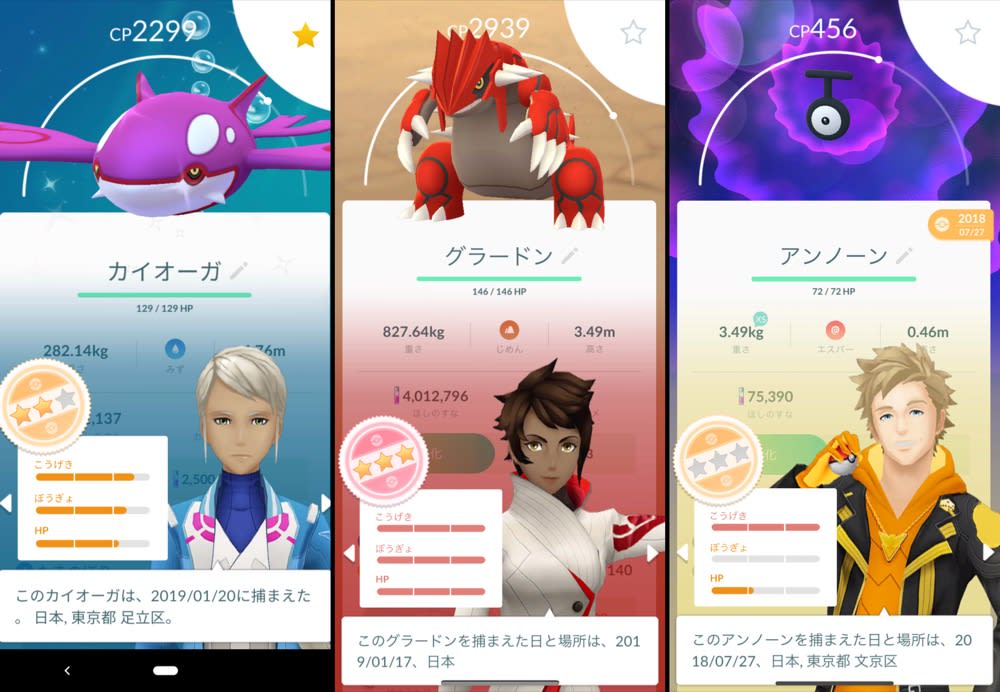 The Pokémon Go app update brings a new Appraisal system to the app.

In the past, players had to decipher ambiguous lines that were different depending on the leader and tapped several times, but after updating, the overall rating of three stars (+ Perfect) and a graph by ability value can be seen clearly.

The new Pokémon box search feature also makes it much easier to pick and choose, such as listing only Perfect Pokémon at a 100% individual level, or curtailing Pokémon below a certain level and sending it to your doctor all at once.

Review of the so-called "Base stats" and "Individual Value"


Before we get into the use of the Appraisal system let's review the meaning of the words "Base stats" and "individual value". If you already know that, skip it.

The Appraisal system, which can be selected from the menu on the Pokemon detail screen, is a function to check the ability and individuality of each Pokemon, or so-called individual value.

Most of Pokemon's abilities, such as attack and defense, are determined by a particular tribe (This is the so-called "Base stats"). However, there is a slight difference in the ability of each Pokemon, which is slightly higher than the base stats. This is the so-called "individual value".

(The term "so-called" is used persistently, but the terms such as Base stats and Individual Value are not official terms, but are merely common names used by gamers.)

In the conventional Appraisal system, the sum of individual values was evaluated by each team leader in four lines such as "Overall, your [Pokemon Name] simply amazes me. It can accomplish anything!" and "Overall, your [Pokemon Name] is a decent Pokemon" and then the largest of the offensive, defensive, and HP lines were described as "Its stats exceed my calculations. It's incredible!" and "Its stats indicate that in battle, it'll get the job done.".

The combination of boilerplate phrases, rather than showing the numbers directly, is a tradition from the Pokemon games of the past, and at the same time, while expressing the personality of the leader with lines, it may have been intended to depict Pokemon as a creature of this world, rather than simply reducing it to numbers.

However, because the expressions were different depending on the leader, it was difficult to tell whether the blue "certainly caught my attention" was above or below the yellow "really strong!", and there were problems such as inconsistencies in communication across the team, and in some cases, speaking in the order of individual from the overall (Total), there was an unnatural "I'm blown away by its stats" from the "may not be great in battle".

There were also user interface issues that made me wonder if they didn't want me to do much research, such as having to tap a few lines that couldn't be cancelled along the way, or If you want to rate a bunch of Pokémon, you also need to select Appraise from the menu for each one.

After the Pokemon Go app update, the Appraisal system is completely new. The total score is three stars, and you can see the specific value of each ability in a chart.

And because you can swipe left or right to see the next Pokemon, it makes it dramatically easier to choose which Pokemon to send to your doctor and which to grow after a community day or so "Carefully Selected".

Meaning of the three-star rating

Overall rating badges (sticker?) range from zero to three stars, but only the perfect individuals will have their badges displayed in pink instead of orange.

In the conventional comprehensive evaluation based on spoken words, more than 82% were the same "the best of them/breathtaking/amazes me", so it is a new function that can immediately identify 100%. (The actual meaning of this "perfect" will be described later.).


Meaning of the chart

The bar graph at the bottom shows the individual value from 0 to 15 in five blocks.

Again, this affects the battle in a way that adds a little more to the ability of each Pokemon species. The "species value" is higher for powerful Pokemon used in places like laid and gym, and the "individual value" in this graph has a relatively lower effect.

The new three-star rating is also available for Pokemon Box searches. The keywords are:
[Numbers 0 through 4] *
followed by a half-width asterisk (*).

For example:
4*
You can list only the perfect individual value Pokemon from all the Pokemon you have.

The Pokemon box can be searched by Pokémon tribe names and nicknames, as well as by type, skill, CP, color difference, whether it can evolve or not, individual value evaluation, and you can also use operators like "&" for "and" and "," for "or".

So, for example, on Community Day,

If you type as above, it will be displayed in the list. This is useful for selecting a group and sending it to a doctor. 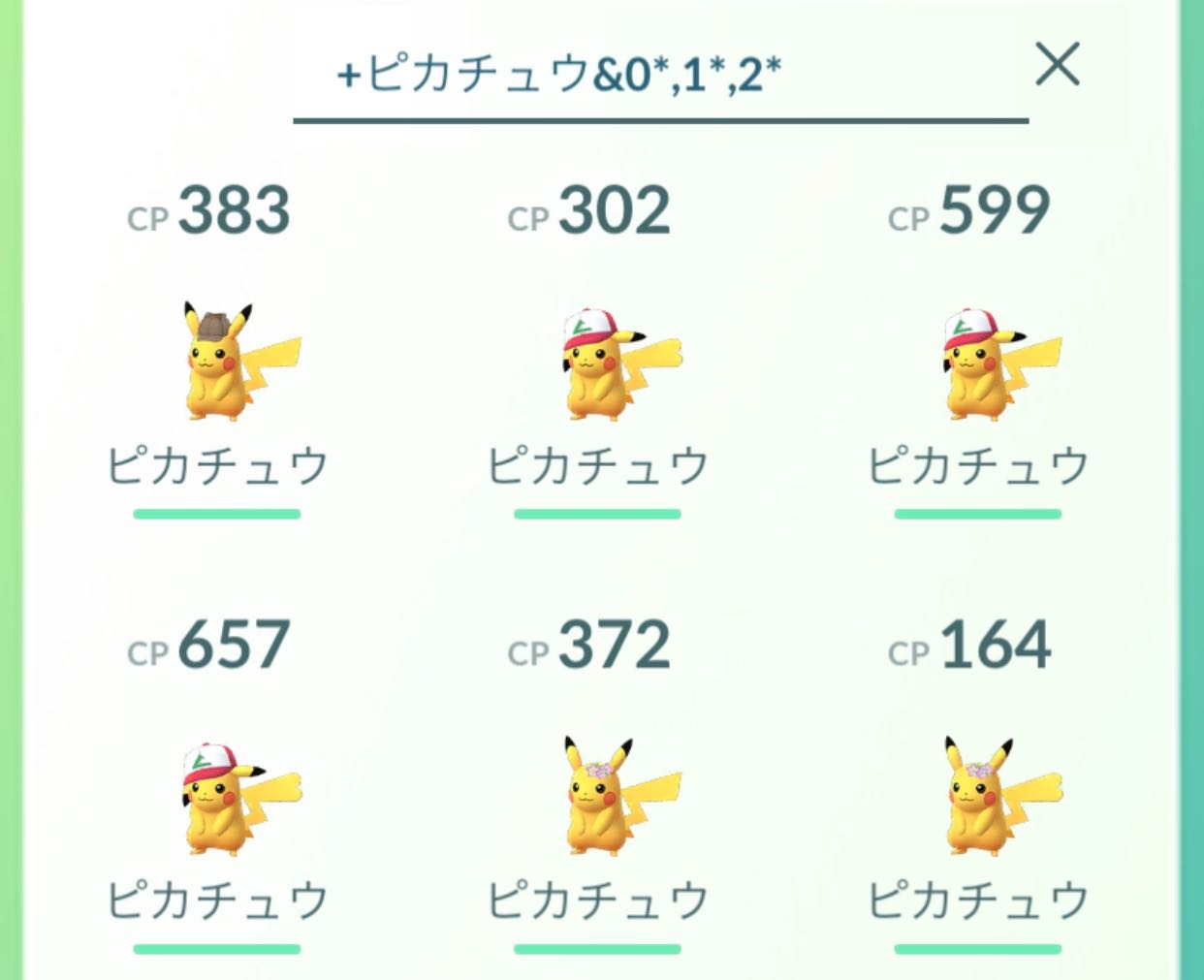 In other words, "Pikachu species before and after evolution with an overall rating of zero or one or two stars".

If the first "&" (and) is mistaken for a "," (or), it becomes "Pikachu or ~", and low-individual value Pokemons other than Pikachu are also included. Similarly, if you tie the overall score numbers * together with an "&", it means "having individual values between 0 and 48.9% and between 50 and 64%" and it is definitively impossible to hit anything.

It is troublesome to type by hand, so you can use common phrases or copy and paste by keyboard, or use iOS.
It will be a little easier if you register
& 0 *, 1 *, 2 *
as a word.

How important is the individual value? and meaning of Appraisal system

It is called "Pokémon Selection" to examine and leave the excellent Pokemon of a specific element such as individual value. This has been done for a variety of reasons and methods in the original Pokemon, a more complex system than Pokemon Go.

Careful selection takes time, and getting a high Pokémon can take a lot of luck or a lot of time, so Pokémon enthusiasts sometimes boast of having an elite individual more than the actual in-game performance differences or wins and losses. On the contrary, there is a controversy that the influence of individual value is limited.

But as far as Pokémon Go is concerned, you don't have to worry too much about individual values. For example, when you hear the word "perfect", everything else seems inferior, but the effect of individual values is often described as "error".


To be more specific,

Overall, individual values are about "You don't have to worry about it when you're playing normally. In theory, there may be a slight difference if conditions other than the individual value are completely the same, so if you want to pursue a battle, especially if you are particular about CP calculation in interpersonal competition,".

Whether you think that you should do what you can if there is a slight difference, or you think that the proportion of other factors is too large and uncertain to be practically worth the trouble is within the playstyle.

Of course, just as everyone wants a different color Pokémon when there is no difference in performance, being satisfied with having a "perfect individual" or wanting to collect many high individual values is one of the ways to enjoy free Pokemon apart from the impact on realistic battles.

On the other hand, this update makes it easier for anyone to check for high-value Pokémon, so it's definitely easier for trainers who didn't care about it, didn't know how to do it, or weren't interested in it at all.

Knowing that there is no practical difference, it is useful as a measure to decide which of the two bodies to strengthen, or to leave only relatively good ones when gathering in large quantities on community days.

With the update, you can now enter 3 * or 4 * in the Pokemon box search to get unexpected results, or you can easily see that Pokemon, which are generally underrated, have different strengths and weaknesses, so the new "Appraisal" feature is a way for trainers who have not been very interested in battles or individual values, to feel the uniqueness of their own Pokemon.