My AirPods Pro has a problem, I research about the defect while replacing it at the Genius Bar : Machine translation

If you have a problem, reset it first. I started using the AirPods Pro as soon as it was released, but I suddenly encountered a problem. I tried many things, but I ended up changing the unit. There are reports of problems around me, but how is it actually? I asked at the Apple store's Genius bar while I was asking for the repair.

The problem occurred within a few days after the purchase.

It's been almost a month since it went on sale. Apple's AirPods Pro is still in short supply, but there are a lot of challenges with its advanced active noise cancellation feature.

First, a dedicated firmware was delivered early on the market to improve connectivity. Two weeks later, a new version of the firmware was also delivered, with improved charging in the case and noise cancellation.

I received my AirPods Pro on October 30, the day it went on sale. The initial firmware version is 2B 576, but it was already updated to 2B 584 when I got it.

But after a few days of using the AirPods Pro, when the external noise level fluctuated, only the left side of the AirPods became choppy or popped.

Such problems occur, for example, when I am waiting for a train on a station platform and a train comes in. There is no problem when listening in the room. When I use AirPods (2nd Generation) under the same conditions, nothing happens. I tried setting the AirPods Pro noise control to "Off" and the problem didn't reappear, so I assumed there was a problem with active noise cancellation. 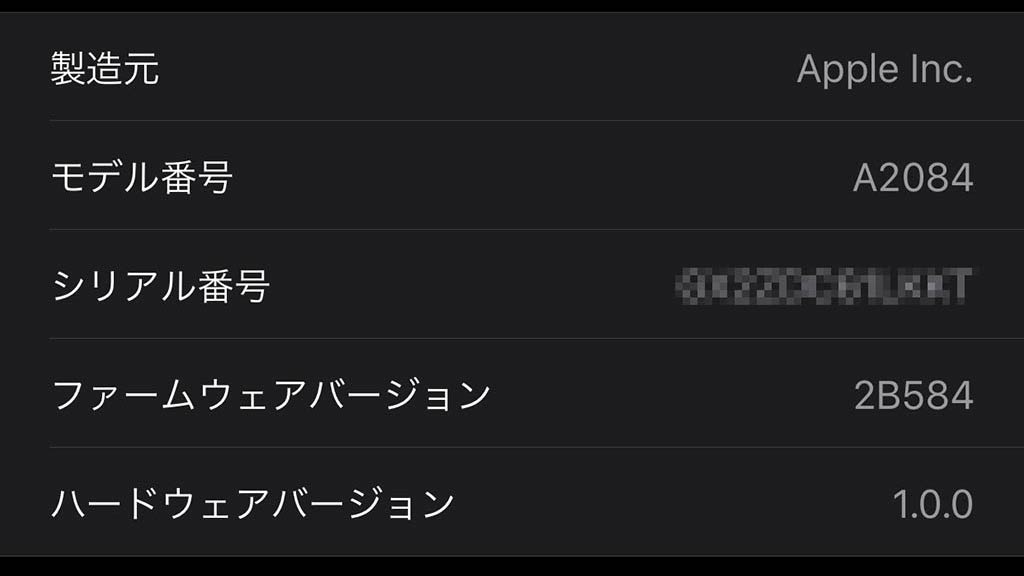 ▲AirPods firmware 2B 584 and the latest version of 2B 588. Firmware updates occur automatically but with certain conditions. This function is available for iPhone and iPad series that have been updated to iOS 13.2 or later, and when both the case and the unit are connected to the charged AirPods Pro and also connected to WiFi. Unlike the iOS update, the status is not visible. The AirPods Pro firmware version can be found in the configuration general information.

A week later, when I put my AirPods Pro back in its case, the left side of my AirPods won't charge at random. the red "!" icon flickers. I fixed it by repairing and resetting the AirPods Pro, but after a few hours it's back again. I suspected that the charging terminal inside the charging case is dirty and has a bad connection, but since I just bought it, the terminal is clean. ▲Only on the left side "!" is displayed and cannot connect or charge. ▲The charging terminal inside the case. If you use it for a long time, dust may accumulate and contact failure may occur, but this is still new and clean.

In the meantime, a new firmware version, 2B 588, is available. The symptom of the problem to be fixed was almost the same as my case, so I waited for it to be updated with expectation and checked the situation again after the update, but it was not improved at all. After all, I decided that I couldn't solve it by myself and contacted Apple support. We confirmed the problem at the Genius Bar in the Apple Store.

If you think there's a problem, reset first. I went to the Genius Bar on the date and time I made a reservation and had them check the condition. As soon as they saw the error on the iPhone, they were acclimatized to the decision to replace the affected left unit. Unfortunately, the replacement product was out of stock on that day, so it will be replaced later. When I asked if there are other similar phenomena, they said that they have several inquiries and consultations a day. Actually, it was not an unusual case. If the reproducibility is low, the staff can check it easily if there is a screenshot in case of an error. ▲Check the situation at the Genius Bar on the 4th floor of the Apple Store Ginza store which is the closest to my workplace. The error condition is input to the iPad, and the staff makes a medical record. It took about 10 minutes. Also, when you receive support at the Genius Bar, you need the original box, and a receipt or a copy of your order email to confirm your purchase,

Two days later, when I got a call from the Apple store and went to replace it, I was given a replacement unit for the left side only, and the original left side unit was recalled. When I asked the person in charge at that time about this matter, it was only a guess because there was no official announcement, but I heard that there were some inquiries from the users that the noise might be generated and disconnected like my case. ▲The replacement unit for the left ear will arrive in a special box. Unless there is a big problem, it won't be replaced completely. The ear chip attached to the replacement unit is M size. The size that fits me is S, so I had it exchanged and received it.

The AirPods Pro only breaks on the left, so I replaced it at the Apple Store. Continue flashing amber until both sides are fully charged. Leave it for a while.

The status light blinks amber until the left and right conditions are the same because the unit just replaced may have a different battery charge state and firmware version. After connecting the Lightning cable and leaving it for about an hour, it stopped blinking and became usable.

The staff advised me to reset the AirPods Pro if something was wrong. Most of the problems are solved by this. In particular, the reconnection may not work well after a recent frequent firmware update, and this can be fixed by a reset operation.

To reset the AirPods Pro, simply remove the pairing, place the AirPods Pro in its own case, open the lid, and press and hold the setting button on the back. Wait for the amber LED to flash. Then try pairing again.

Like iOS updates, Apple products are getting frequent firmware updates these days. It seems to be good to check it frequently.