iPad Pro: 5 things you should know before you buy : Machine translation

Are you ready for iOS? ​​​​​I am a writer who loves "Work solely on the iPad". At the recent WWDC 2019, iPad users were pissed off by the introduction of the iPadOS, the ability to run multiple apps simultaneously, and the introduction of Sidecar, which makes the iPad a Mac sub-screen. Many of you probably want an iPad.
Related Articles:
Expect Independence From iOS To "iPadOS" (Masakazu Honda) # WWDC 19
The new macOS is "Catalina", iPad becomes a sub-screen, iTunes Disappears # WWDC 19


The lineup as of June has a wide choice of iPad mini, iPad, iPad Air, and iPad Pro. But if you want to use the iPad as a computer for your business, I recommend the iPad Pro. It's faster, the Apple Pencil (2nd Generation) charges smarter and easier to use, the keyboard, which is integrated with the main body, is convenient and has excellent mobility in all aspects. .The reason why I am so eager to say "The iPad Pro is good, very good." is because "high mobility". It's quick to use, long-lasting, free to input and output, and fast.

There are many tablets and products called 2in1 other than iPad, and if you don't mind not using iPad, you can buy them. If you're new to the iPad Pro as your first iPad, or if you haven't touched an iPad since its second-generation ... here's what you need to know.

1. You can't use flick input, but you can use the app.

Flick input is a standard input operation for smartphones. When using it on the iPad, if you split it left and right while typing in Japanese and using Roman letters, a flick would appear on the right side. However, the iPad Pro doesn't support flick input. If you "Oh, that's too bad!!" >re using an app that allows you to use flick input. My recommendation is Katate keyboard PRO.

You can change the position and width of the keyboard, so you can customize it to fit your hand size. It is also convenient to use with iPhone.
App: Katate keyboard PRO
Developer: TAWASHI KAMEMUSHI

Did you know? Flick input is not available on the iPad Pro 11-inch. If you want to use it, install an app. I recommend "One-Hand Keyboard PRO". The keyboard position, width, and color are flexible. With big (or small) hands, you don't have to make typing mistakes. You can also use it conveniently on iPhone.


2. Unlike other iPads, it charges with USB-C

It wasn't until October 2018 that all iPhones and iPads were rechargeable with the Lightning cable. The iPad Pro 11 "and 12" released in November came with USB-C for charging, so you'll need a USB-C cable that supports 18 w or more to charge them. In my case, I didn't have much to charge using USB-C, so after I bought the iPad Pro, it became a mess because "I DON'T HAVE A CABLE TO TAKE MY BUSINESS TRIP" and "I DON'T HAVE A CABLE TO CONNECT TO THE BATTERY!!". You should buy various types of USB-C cables. Don't forget to check the maximum output when you buy it.

Also, if you're switching from another iPad, you won't be able to use any of the accessories that you've used so far, so be prepared for it. If you buy an adapter for output, I recommend the all-in-one type.

I use TUNEWEAR AlMIGHTY DOC. It's slim and light, has HDMI output, SD and microSD card reading, and has a lot of features. It's convenient because you don't have to have multiple adapters. 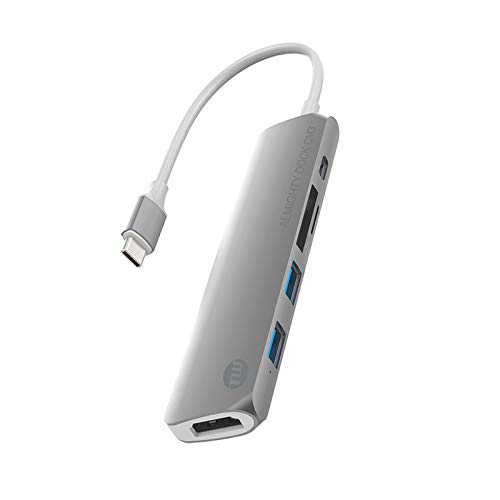 
3. Using a genuine keyboard, the case cannot be attached. 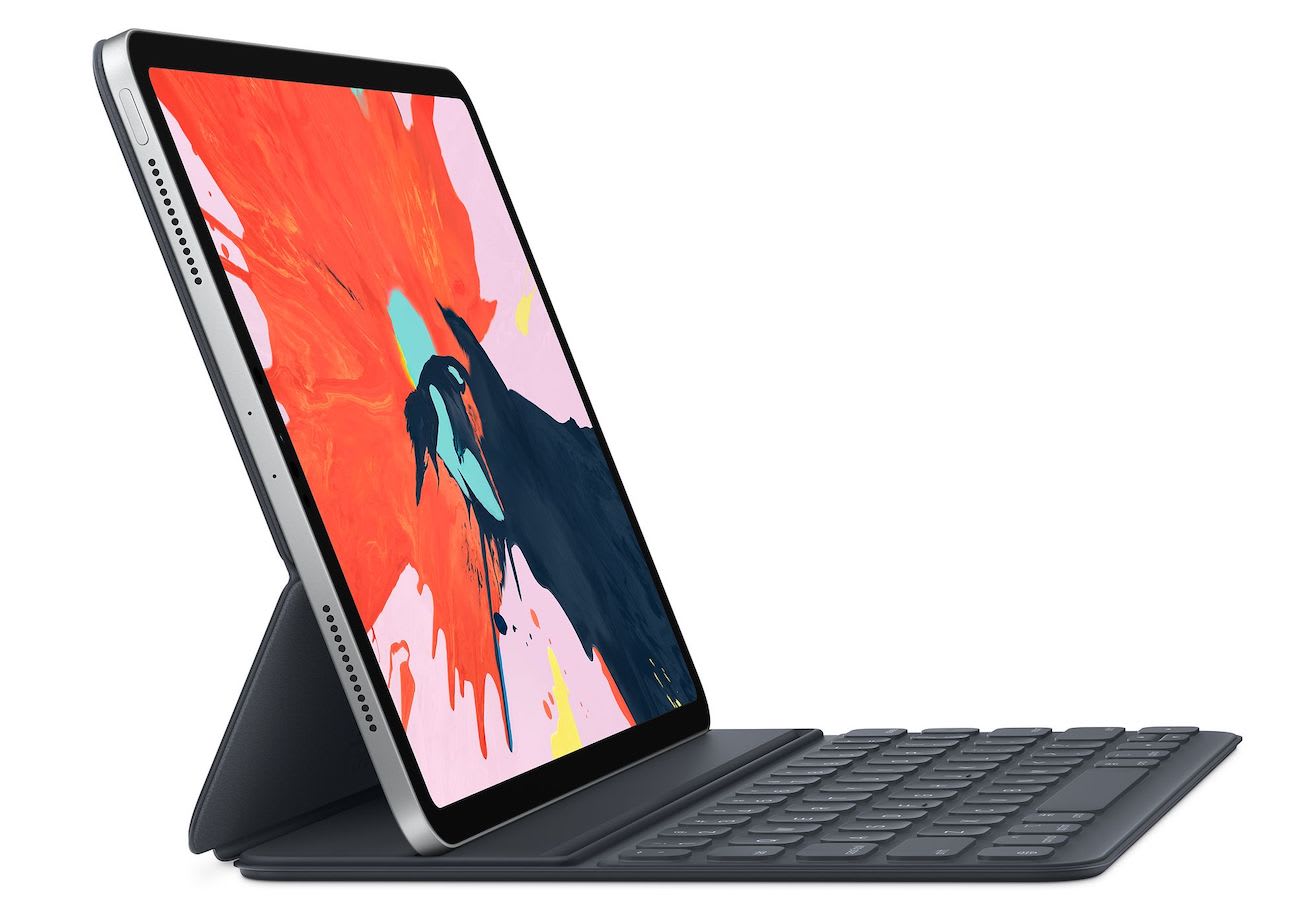 Until the iPad Pro 10.5-inch, you could install the keyboard with the case attached to the iPad itself. However, since it became 11-inch, the keyboard has become notebook type (Folio), so you cannot attach another case. Therefore, the side of the main body is always exposed. If you're worried that you're going to drop it and put it in a sturdy case, you can either use a software keyboard or choose a non-genuine keyboard.

By the way, this folio type makes it thin and easy to handle, so I like it. (To be honest, I dropped it and the aluminum on the side was chipped.)

My complaint is that it is easy to get fingerprints and dirt. Especially women tend to put on sunscreen or foundation. When I was in trouble, I heard that people who love cameras talk about "Muse Wet Cloth Removes Dirt on Lens", so I tried it with the iPad Pro. Then it came off very nicely. In short, I think it means that sebum dirt is easily attached.

By the way, a genuine keyboard does not light up. So does the iPad Air (10.5). If you're touch typing and don't see a keyboard, don't worry. However, compared to Mac Book and other common keyboards, the keys are narrower, and the right edge is slightly clogged. But You'll get used to it as you use it.


4. You can choose between two different display angles, but you have less freedom.

With the iPad Pro + SmartKeyboard Folio, you can choose between two different display angles. 1. The best angle for watching movies or videoconferencing (nearly vertical) 2. The best angle for typing text

The latter, however, tends to curl up your back if you don't lower your chair a lot when you're sitting on a standard computer desk. The iPad Pro is actually the easiest to use on a laptop ... in other words, at an angle you place it on your lap. That's great for a mobile device, but if you want to keep using it at home or in the office, it's better to install a stand and a Bluetooth keyboard. If you push yourself too hard, it will come to your back, neck, shoulders, and waist.

When I use it at my desk, I use Logitech K 480 wireless keyboard. It sounds like "I'm typing in the keyboard." at the best angle for text typing. In the office, it might be a bit noisy, so be careful.


5. Screenshots can be taken with one hand

The iPad Pro doesn't have a home button. You can use Face ID to unlock your phone with face recognition. That means you can't use the home and sleep buttons to take screenshots. So how do you shoot? Check out the video below.

How to take screenshots of the iPad Pro. Press on the sleep and volume buttons. It's pinching. Isn't it the smartest iOS gesture?


Isn't this very good? Of all the iOS gestures out there, I think it's the smartest and easiest. You don't have to take your hands off the keyboard, just two fingers. It's a handy feature for a writer who needs to take a lot of screenshots.

In addition to the five points mentioned above, there are other easy-to-understand advantages such as "The iPad Pro supports the Apple Pencil 2, so it doesn't have to charge clunky." and "It's good because the pencil doesn't roll." "It is good that the battery lasts long.".

Also, I am often asked the question "Do you need an Apple Pencil for business use?", but I always answer it like this.

If you like to use a whiteboard to organize your thoughts in meetings, write down your ideas in an analog notebook, write down your ideas with a pen before you make a presentation, or love a handwritten mind map, you should definitely buy one. It's perfect. On the other hand, if you've flicked into your phone and never handwritten an idea in your notebook, you probably don't need it.

At first, when I recommended the Apple Pencil to everyone because I couldn't figure it out, they said, "I don't use it." so this is probably the best solution. Of course, if you're interested in using your handwriting if you can store it digitally, you might want to consider using the Apple Pencil. Handwriting is fine.

Have a great iPad Pro life.