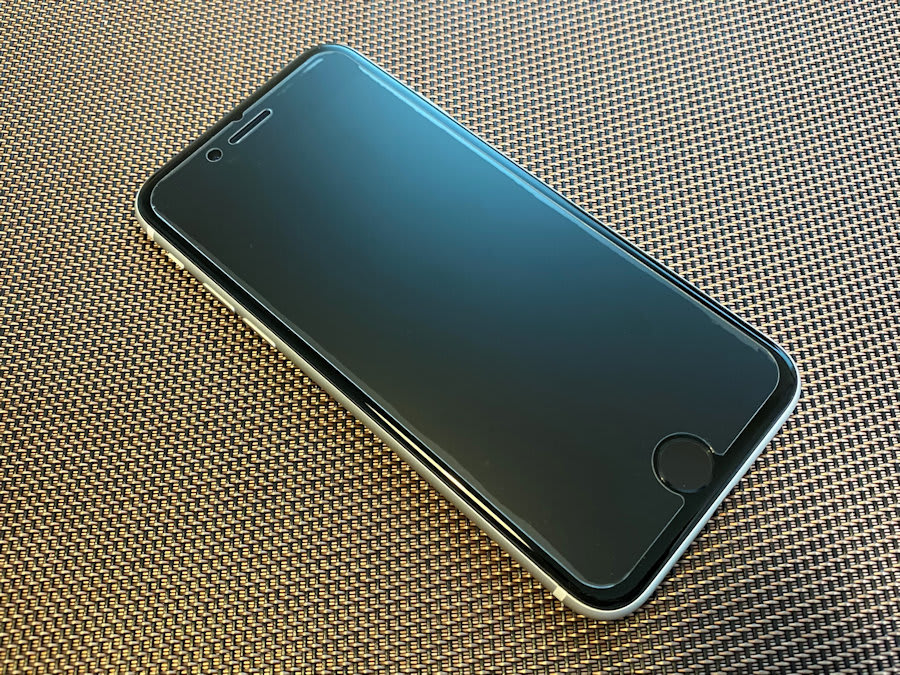 Aside from the logo placement on the back of the device, the body of the iPhone is almost identical to that of the iPhone 8 and is also compatible with its genuine Apple phone case. However, inspection of the actual device has shown that there is a slight difference due to the curved glass of the front screen. Be careful not to get yourself in a bind by trying to prepare beforehand through purchasing existing products.

While we haven't tested all products available, attempts to apply a number of iPhone 7 and 8 glass screen protectors onto the new iPhone SE (2020 model) have shown that none of them adhere completely on both sides. ▲ As seen here, the left and right edges are raised up. ▲ The same applies for full-screen protectors. A vertical line of air appears on the left and right of the LCD. No amount of pressing can get the air bubble out, it reappears immediately.

Aside from its internals, the second generation iPhone SE was thought to be almost identical to the iPhone 8. However, It appears as though there is no mistaking the fact that there is a slight difference with the front screen glass. For those who are looking to buy the new SE, be careful not to make the mistake of buying these products as there are already compatible products on the market. The one we tried out this time was the TOUGH GLASS 3D glass protector by Deff. ▲ The product on the left is the new SE version. The adhesive placement of the silicone layer and the layer itself is designed to suit the iPhone 6 and above. Let's try installing it onto the new SE. ▲ All of the air is removed in an instant. It doesn't look like anything is installed on the screen, but trust us, there is. ▲ Adhered perfectly across the whole screen. A version of the High Grade Glass, a non-full-screen protector, has also been released for the SE.

LCD film screen protectors compatible with models up to the iPhone 8 installed fine without any issues. ▲ We tried out one from the reliable and proven MIYAVIX OverLay series. ▲ Installed perfectly without any air bubbles. ▲ Just to be on the safe side for us non-phone-case folk, the back body protector also installed without any issues.

So why are the film screen protectors fine and not the glass ones, you ask? Because glass is hard and film is supple. With that being said, we can't offer any guarantees since we haven't tried all of the film protectors on the market. In conclusion, for the glass-screen-protector fanatics, make sure you choose one that is SE-compatible, and for the more adventurous, go for the OverLay.

Related Articles:
Apple officially announces 2nd generation iPhone SE with A13 Bionic starting at 45K yen
Who is the new iPhone SE for? - Superior functionality for under 50,000 yen and eSIM compatibility for people on a budget