Playing "Online Werewolf" in Zoom drinking parties is great! A simple introduction to how to play

I've been playing it three times a week. 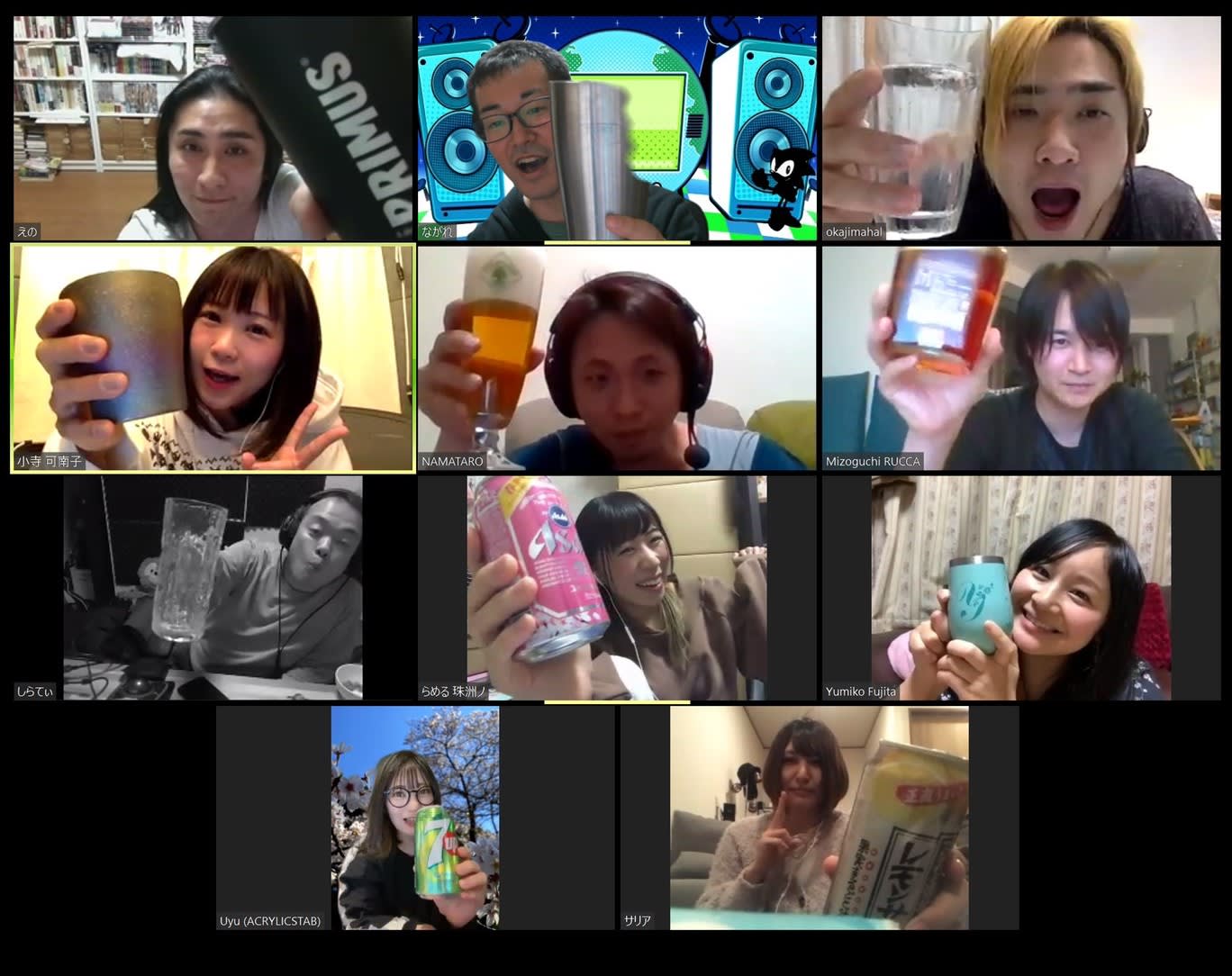 Hi there, Sunagare here, writer for the Engadget Japan blog.

Have any of you been taking part in "Zoom drinking parties?" A Zoom drinking party is where you socialize and drink at home with your friends over the online video conference service "Zoom."

I've ended up taking part in Zoom drinking parties three times a week for a fair few weeks now. I've been doing this with mostly the same people each time. People will probably say "aren't you meeting up a bit too much?" but since we started playing this game called "Werewolf," it's been too fun to stop.

We've often been playing a version of Werewolf where you can quickly play with a small number of people called "One Night Werewolf." As it's been so fun, we've found more and more people are taking part, and we've been meeting more frequently. I feel that this obsession of mine is going to continue even after the coronavirus social distancing relaxes.

On that note, allow me to introduce how to play Werewolf on Zoom and have some fun.

To those who ask "what on earth's a Zoom drinking party?" please check out my colleague Honda's article.

Related articles
Curious about Zoom drinking parties? Try it out and see how fun they are (Article in Japanese)

So what are Werewolf and One Night Werewolf?

The game is split into day and night turns. In the day turn, all players converse and try to deduce "who is a werewolf." Throughout the course of the conversation they search for the Werewolf and suspicious players, and the majority select one person to execute. Night is the Werewolves' turn. They choose one Villager to kill, and the game continues. The number of players decreases as the days and nights continue, and if the Villagers root out the Werewolves, they win. If the Werewolves survive, they win.

Additionally, there are some special Villagers in the game, who hold roles in the village. For example, the "Sorcerer," who can divine the true form of someone they think suspicious, or the "Lunatic," who wins if the Werewolves win. As these positions exist, the Werewolves can pretend to be one of them, or conversely, the roles can be used to find out who the Werewolves are. That's one of the best bits of the game.


▲ Those who know nothing about Werewolf can watch this video to get a good understanding of the game.

An average game of Werewolf takes about one hour, and requires a minimum of eight players. Although I said it's a game you can play casually in an online drinking party, eight people might be a difficult number to get together. As such, we've been playing One Night Werewolf, which takes about 10 minutes and can be played with a small number of players. I'd recommend One Night Werewolf as a starting point for those who want to play in Zoom drinking parties. 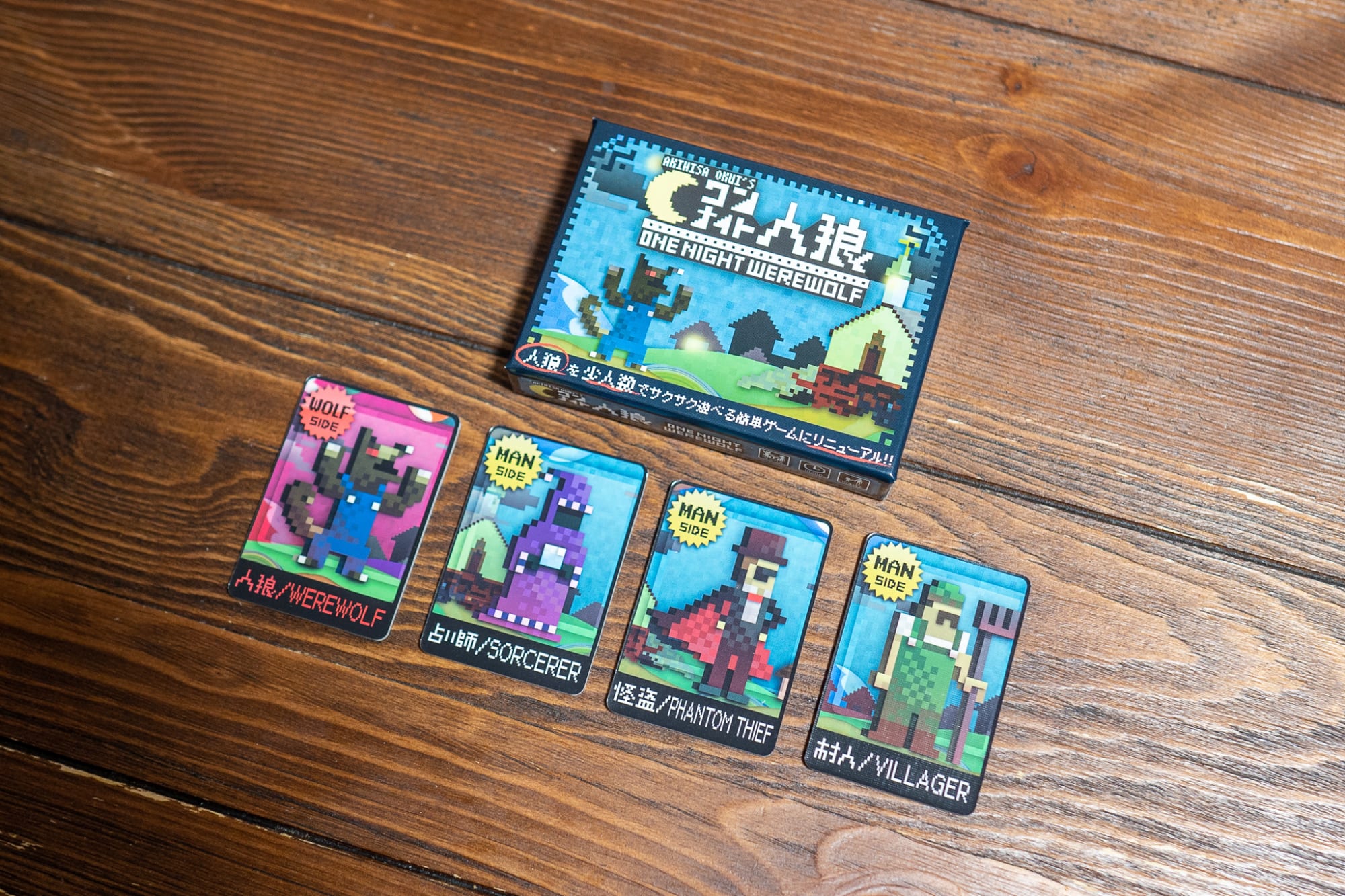 As the name suggests, One Night Werewolf is a game of Werewolf that's over in just one night (one night turn and one day turn). If the Villagers find the Werewolves in the day turn, they win, and if the Werewolves survive, they win. As the game's over in about 10 minutes, it's easy for beginners to play, and its appeal is the diverse range of special villagers you can play as. 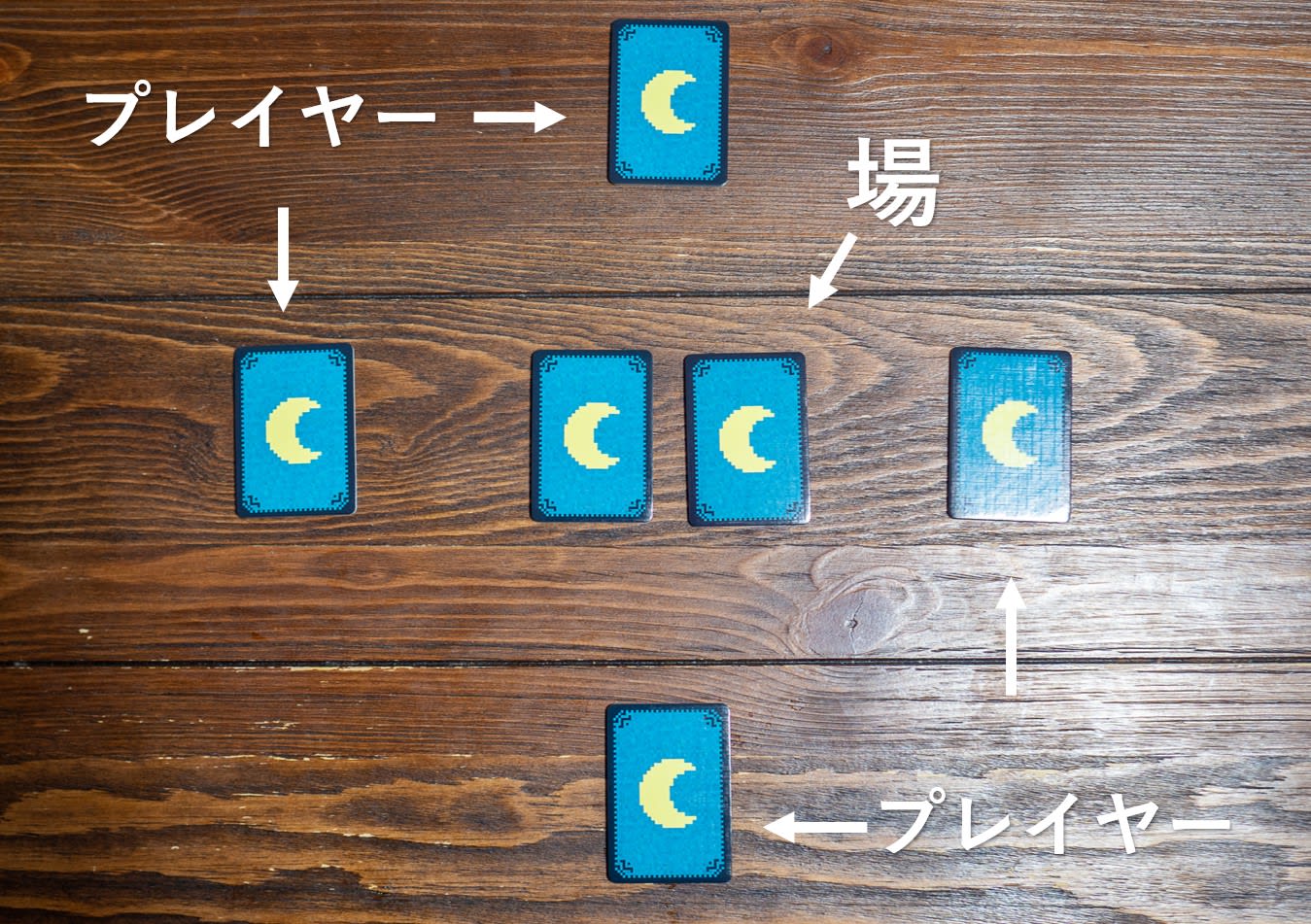 Where One Night Werewolf differs to Werewolf is the existence of the "Location" and the increased importance of special roles. In One Night Werewolf, two cards containing the unused special roles are placed separately to players' cards in the Location. Only the Sorcerer can see the cards in the Location (they choose whether to see the true form of a player or the Location cards), and as roles are usually hidden, knowing what roles cards aren't in use can really help players to figure out who the Werewolves are.

The creator of One Night Werewolf, Ookami, has made the rulebook public. Click below to see details.


All you need is a PC or smartphone

To play One Night Werewolf, all you'll need is a PC or smartphone to log into Zoom. Although the GM (gamemaster) will need a pen and paper, preparation is easy. I'll start by explaining what you need to do.

1. Get together on Zoom.
2. Using a pen and paper, the GM should make as many cards as players, then two more.
(Because of the two "Location" cards in One Night Werewolf)
3. The GM randomly assigns roles to each of the players and randomly selects a location. They should then tell each player what their role is using Zoom's private chat feature.

The night turn
4. After the players have checked their own roles, they should hide their face from their webcam and mute themselves so they can't be seen or heard.
5. When the GM requests it, the Werewolves and any other applicable roles should reveal themselves. After this, they should resume hiding their faces.
6. On the GM's prompt, all players should unmute themselves simultaneously

The day turn
7. Debate begins (This should take five to seven minutes, the GM should advise players of the remaining time as needed).
8. Using the group chat on Zoom, players should vote until a majority is reached.
9. The GM announces the roles of those voted to be executed.

10. Review of the game (can lead to some heated discussions). 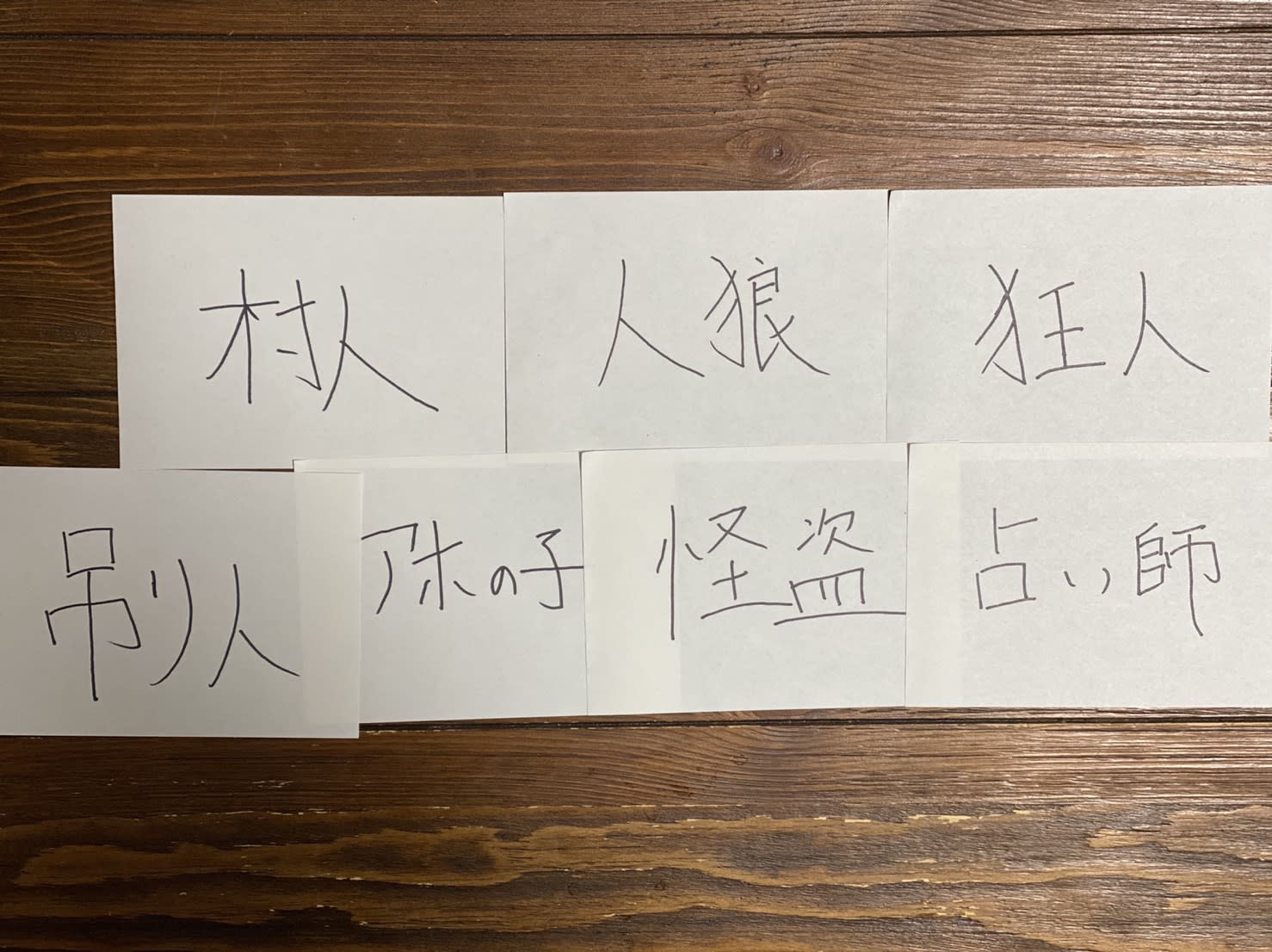 In our games, we don't own the original game, so we've made our own cards with the roles on them. As for why we use paper, that's because it can be hard to read cards on Zoom, and it also means that anyone can be the GM for a game. Also, although there are browser-based versions of One Night Werewolf, they can be difficult for people on a smartphone to use. Here in the article, I'd like to explain a way of playing where everyone can take part.

However, if possible, you should try to play using PCs. PCs are better to use as this means you can see everyone's face clearly. If you're using a smartphone, you can only see up to four people's face on screen at once, meaning you won't be able to see all of the players' expressions during the debate round.

Another benefit is that you can play the entire game completely on Zoom. As there's a private chat function in Zoom, roles such as the Fortune Teller can use it to tell the GM their choices (although they should ensure to mute their audio to hide the sound of their typing).

A point to look out for is that unlike the original game, the GM can't take part in this version of the game. However, being a GM is quite simple, and watching players' debating and infighting from the outside can be quite fun, so players can take it turns to be GM. We've included the script our GMs usually use at the end of this article, so feel free to use it for your games.

In that game, with the exception of the GM, the roles were as follow.

Let's go over the special abilities each role has.

You could feel the chaos and the fun right? The "Village Idiot" is a role that we made up ourselves and certainly makes for a chaotic game. However, the role is easy and helps people to get involved right away, making for a nice casual game of Werewolf.

Although in this game we had 10 players, you can play with as little as four (including the GM). I've put together suggested roles for different numbers of players. In my experience, about four to six players and a GM is the best number of players for an exciting game.

When playing with a GM and three players
One Werewolf, two Villagers, one Fortune Teller and one Phantom Thief.

When playing with a GM and four players
Two Werewolves, two Villagers, one Fortune Teller and one Phantom Thief.

When playing with a GM and five players
Two Werewolves, three Villagers, one Fortune Teller and one Phantom Thief.

When playing with a GM and six players
Two Werewolves, three Villagers, one Fortune Teller, one Phantom Thief and one Lunatic.

After the game is over, it's time for one of the best bits, the post-game discussion (often an argument). Topics to discuss while drinking include "I can't believe you'd betray me like that!" or "what could we have done differently to win?" and really build anticipation for the next round. It's interesting to see how peoples' perspectives change after another game.

In this article I introduced "One Night Werewolf," a game you can enjoy during Zoom drinking parties.

Although online drinking parties have become a thing due to the spread of the novel coronavirus, I feel that they might be here to stay even after the coronavirus has calmed down. Meeting up with the same people every time, you can run out of things to talk about. If you find that's the case, why not consider changing things up and playing a game like One Night Werewolf?

For those who want to try play Werewolf but would find it hard to assemble an online drinking party, why not try it in an online chat or a smartphone app such as "Werewolf Judgement"? In addition to Werewolf and One Night Werewolf, my friends and I have also been playing "Wordwolf," a version with more relaxed rules.

I feel like there have to be more games that you can play in online drinking parties. If you know of any fun games, please let me know.

Lastly, I'd like to thank my friends for playing Werewolf with me, and helping me to write this article. Let's meet up again tonight.

GM script for a One Night Werewolf Zoom drinking party

Everyone, please put yourself on mute and go to sleep.

Now, Werewolves, please wake up.
You're the Werewolves.
Do you understand?
Make sure to take a good look.

Moving on, Fortune Teller, please wake up.
Please let me know what or who you'd like to tell the fortune of in private chat.
This could take a little while everyone, so please wait.

Those people are this (showing cards on screen).
Now, Fortune Teller, please go back to sleep.

Moving on, Phantom Thief, please wake up.
Please let me know who you would like to change roles with in private chat.
This could take a little while everyone, so please wait.

Okay, you're now this role.

With that, everyone please take yourselves off mute.

Werewolves has slipped into this village.
Please decide who you think the Werewolves are within the time limit of x minutes.
(As appropriate, let the players know the remaining time using something like a smartphone stopwatch)

Time's up.
So, everyone please write who they think the Werewolves are in the group chat. Please don't hit enter until everyone's ready. On the count of three.