Plans to support Photography Pro after a software update 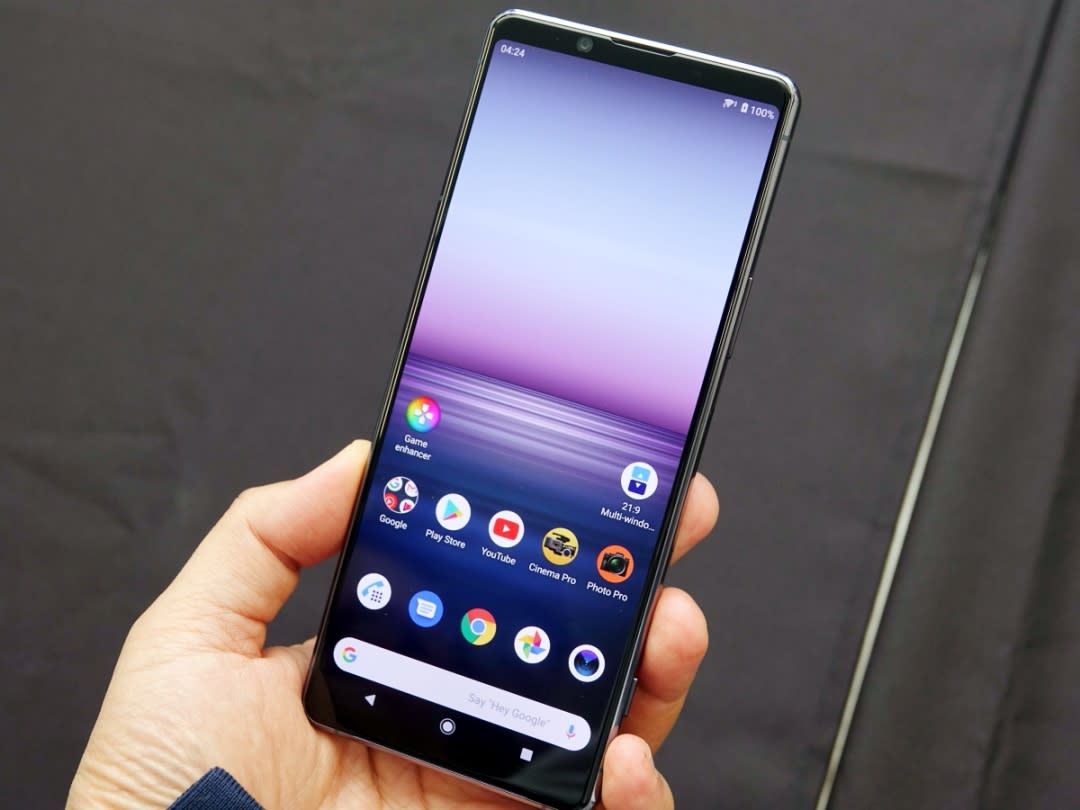 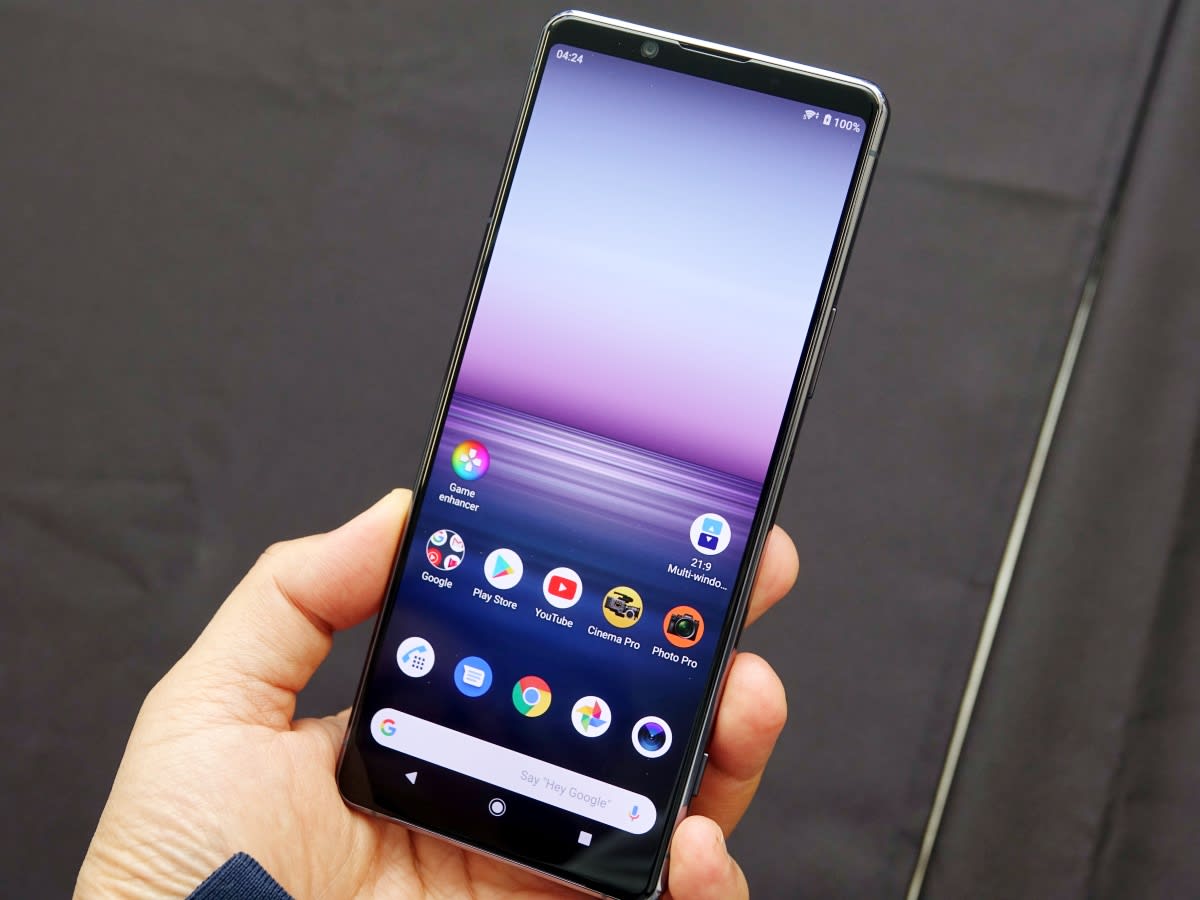 Xperia 1 II's triple-camera setup features a super-wide angle lens, standard lens, and telephoto lens, complete with a 3D iToF camera capable of measuring depth. All three of these camera lenses are of the ZEISS brand, and enrobed in a T* coating.

The greatest feature of this camera could be considered the standard 24mm camera lens, with its 35mm focal length. A 1/1.7 inch large sensor larger than Xperia 1 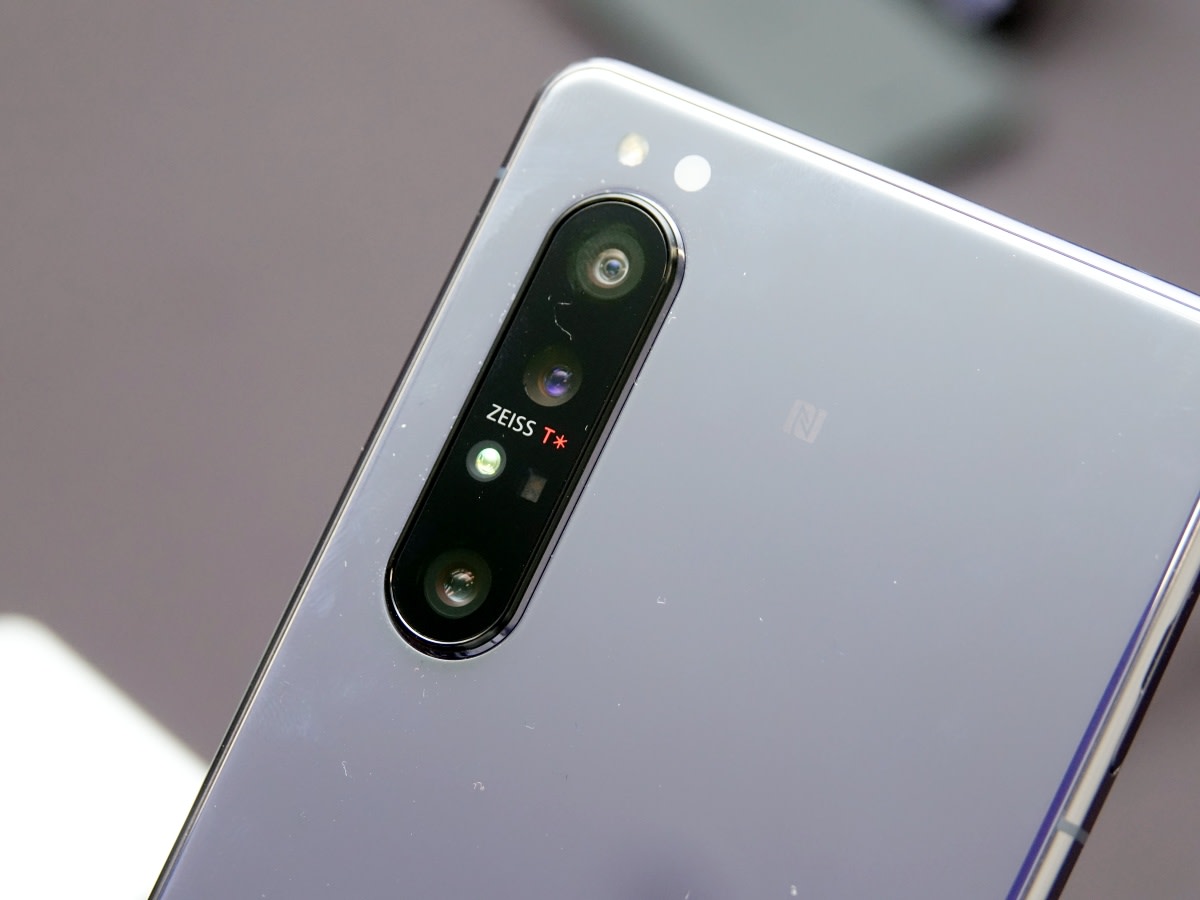 ▲ The back of the phone has been equipped with a triple-camera array coated with T*.

By enlarging the wide-angle sensor, pixel pitch has become 1.8μm, and "the light-gathering ability of the camera has significantly increased, at 1.5 times that of Xperia 1." (Toru Morita of the Technology Communications Section, Product Marketing Dept., Sony Mobile Marketing Division.)

This sensor has a large phase-detect AF sensor spanning its entire imaging range, making it capable of swift autofocus regardless of the environment. As a result, "Xperia 1 II achieves rapid autofocus and high-speed photography in dimly-lit settings." (Morita)

Recent smartphones include those with sensors exceeding 100MP, and image resolution is being enhanced particularly amongst high-end models. Even if 10MP may not be so common, there is a gradual rise in the number of smartphones with 64MP or 48MP cameras. The benefit of this is that it can be used to zoom with cropping, and the sensitivity can be raised by integrating multiple pixels. ▲ Standard camera sensor increased in size to 1/1.7". The pixel pitch is large, with a fast readout speed.

Meanwhile, at 12-megapixels, Xperia 1 II has the same number of pixels as the first-generation Xperia 1. This is said to be owed to Sony Mobile's policy.

The reasons are, first, taking a photo at full resolution would result in a dark image, and second, "with 108 megapixels the readout speed would be 100ms (0.1 seconds), therefore a moving object would appear sideways." Some full-size single-lens reflex cameras are 12-megapixels, and Xperia 1 II also prioritized brightness and speed over pixel count.

Also, thanks to its high-speed sensor, this camera is capable of shooting 20 fps and 60 AF/AE calculations per second. Xperia 1 II features 247 AF points to each frame and leverages AI-based technology to detect main objects.

This makes it capable of high-speed photography while constantly aligning focus. In dimly-lit settings, the 3D iToF sensor offers high-speed and high-accuracy AF. In addition, the Real-time Eye AF also featured on Xperia 1 applies not only to people, but also animals, such as dogs and cats. 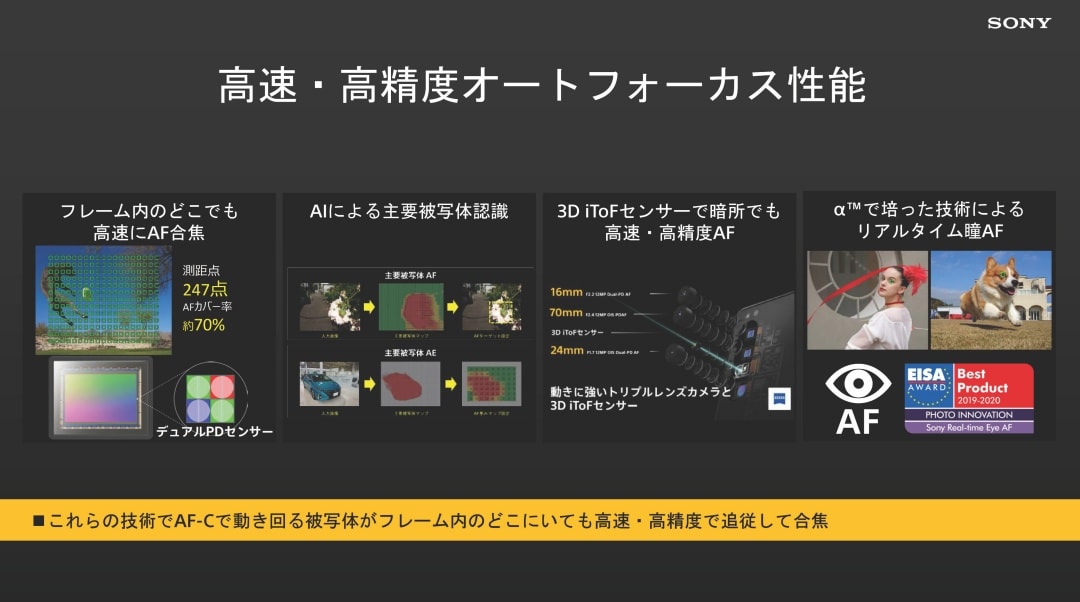 The two other lenses making up the triple-camera array are the 16mm super-wide angle lens and 70mm telephoto lens. Regarding angle-of-view, the telephoto ratio of the telephoto camera is greater than that of Xperia 1 at approximately 3 times the magnification, and (according to Morita), this was due to being conscious of the so-called "Big 3 Lenses" of a camera with interchangeable lenses.

As such, every sensor was standardized at 12-megapixels. The aim was to avoid a camera whereby changing magnification automatically meant changing the image size too. 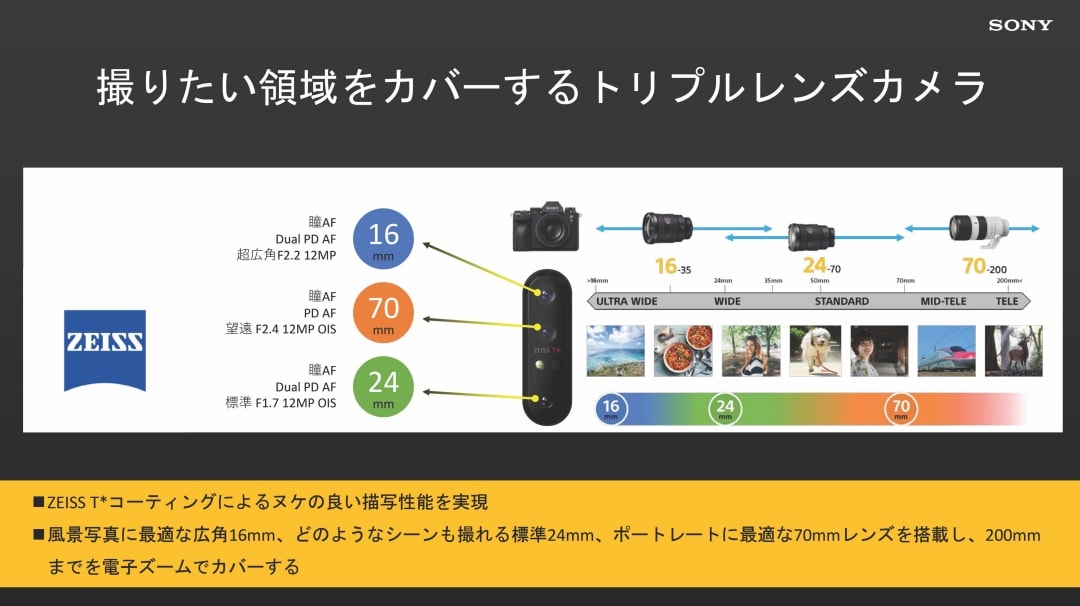 ▲Sony says its triple-lens focal length was conscious of the "Big 3 Lenses."

Naturally, Xperia 1 II's camera cannot change its focal length like a camera with an interchangeable lens, and there is a need to go through digital zoom for 16mm, 24mm, and 70mm, as well as from 70mm to 200mm. Hence, it is not the case that this camera has reproduced the Big 3 Lenses specification entirely, however it could be said that, for a smartphone, it has simulated a similar usability.

This kind of camera function is maximized thanks to an app called Photography Pro. The UI equipped in a single-lens reflex camera α has been rearranged for smartphone use however, unlike a simple camera app, it closely collaborates with Xperia 1 II's hardware also.

The major difference with most smartphone camera apps is the absence of a shutter button on the screen. Xperia 1 II sports a shutter button on its side, and Photography Pro's UI is designed based on the assumption that this button will be used to take photos. 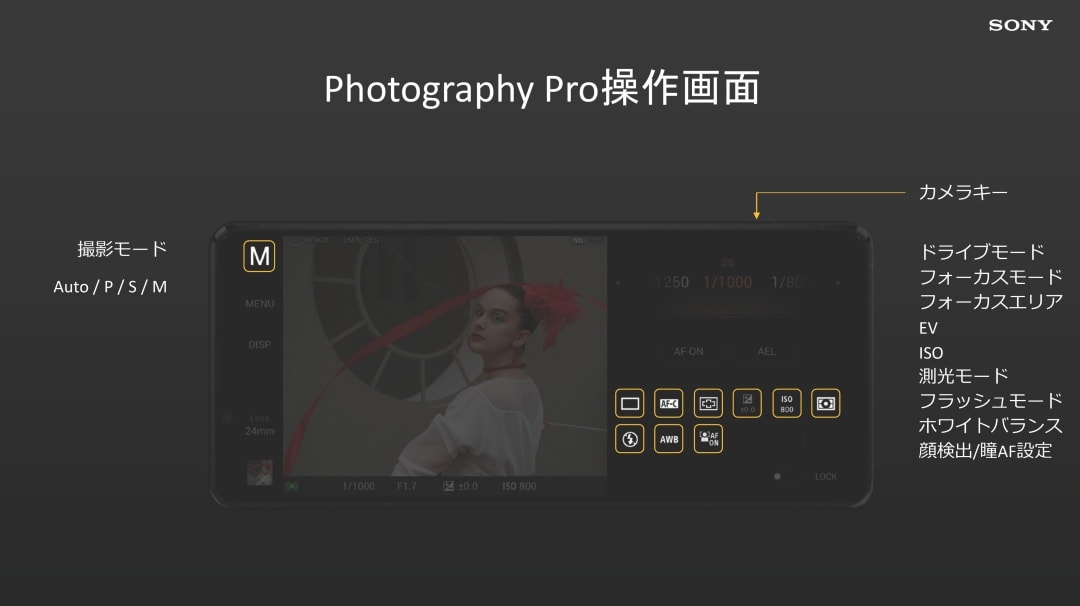 ▲Photography Pro has no shutter button on the screen, but rather takes photos with a shutter key.

In addition, the 20 fps continuous shooting and 60 AF/AE calculations per second mentioned above assumes Photography Pro will be used. Xperia 1 II stands out from the crowd as a smartphone adopting techniques similar to a camera.

It is clear that, even within the Sony Group, Xperia 1 II is "positioned as a member of the Sony Imaging Products family" (Morita) and, as opposed to a smartphone with a photo-taking function, it is considered to be a digital camera with a 5G communication function. 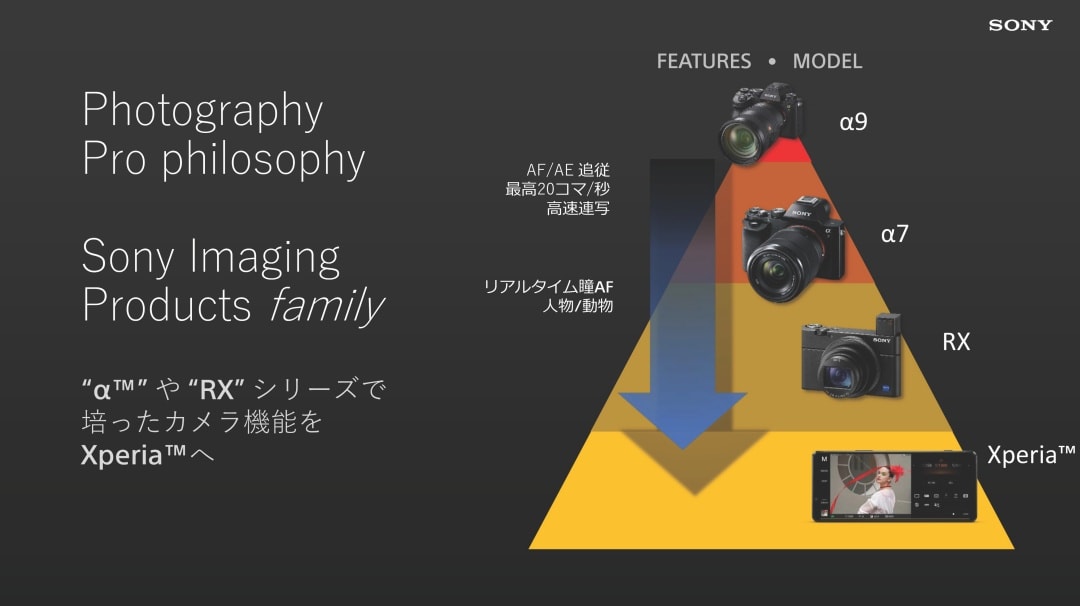 ▲Positioned as a camera with a broader range than the α series and RX series.

However, because of this, it lacks some photographing features common to other smartphones. One example is the "nightscape mode" or "night mode" feature which significantly improves images taken in dimly-lit settings through rapid shooting of multiple photos.

Naturally Android and iPhone have a similar feature however Sony says that it intentionally did not adopt such a mode. (According to Morita) this is due to the company's stance of "We didn't want a mode that creates a picture unlike what the naked eye sees in reality."

In regards to zoom UI also, as a result of prioritizing the concept of reproducing 3 interchangeable lenses, users must explicitly select either the super-wide angle, standard, or telepath camera individually, and there is no option on the UI for automatically switching cameras in the middle of zooming.

One could say that a smartphone characteristic is how it compensates for falling short of a digital camera due to size restrictions with computer capabilities. The computational photography professed by the Google and Pixel series is a typical example.

In more simple terms, a problematic point of Photography Pro is that its tricky to take photos vertically. Amidst technological innovation enabling videos to be shot vertically, this raises doubts as to whether the UI meets the standards for a smartphone camera.

Perhaps if Sony equipped a regular camera app in addition to Photography Pro, that wouldn't be so bad in terms of achieving a more "smartphone-like" camera. Although I sensed Xperia 1 II's camera differentiated itself from the pack, the more thorough an explanation I received, the more I felt the model slightly diverged from the definition of a smartphone.

Related articles (Japanese):
Review of Xperia 1 II, a close look at the meticulous improvements in addition to 5G support
A 5-minute close-up on the 5G smartphone "Xperia 1 II" equipped with a headphone jack and ZEISS lenses