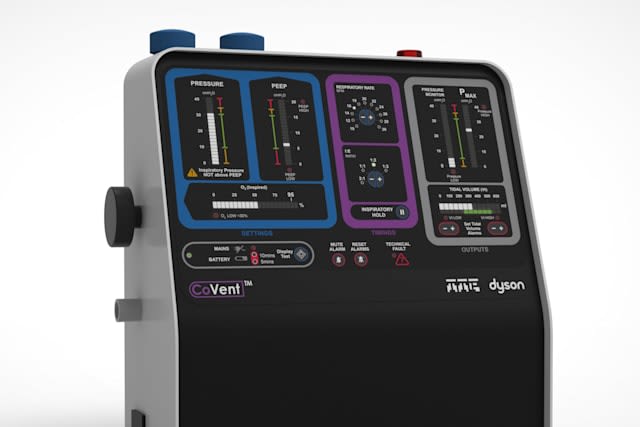 The National Health Service (NHS), Britain's public health service, ordered 10,000 CoVent ventilators developed by Dyson to respond to the sharp rise in the novel coronavirus cases in the UK. The ventilators are currently undergoing necessary clinical tests for approval. However, company founder Sir James Dyson revealed that the supply contract from the British government had been canceled.
Only a quarter of the ventilators initially estimated were required. CoVent ventilators had been manufactured in just ten days, but the necessary approval process takes time, posing an obstacle to the newly developed device. The company invested almost 20 million GBP (about 2.7 billion JPY) in the ventilators.

Airbus and other companies that had received orders from the government and are manufacturing ventilators like Dyson have made plans to improve existing ventilators and scale up production. Dyson is diverting attention away from the lengthy approval process and has received an order for 15,000 ventilators.

The British Telegraph and other publications reported that the government had shown discomfort after Dyson had revealed CoVent production figures before the NHS coronavirus response strategy announcement. Views that Dyson's claim may have been a "point scoring" attempt have also emerged. The company promised to manufacture large quantities in a short period, despite the time needed for regulatory agency approval.

According to its founder, CoVent has already served its purpose for the UK government. However, clinical tests to secure approval continue amid ongoing demand in the US and other countries. The government's decision to cancel its supply may harm the company's reputation. Dyson abandoned its plans to develop an electric car last fall and is finding little success from projects outside of its eccentric vacuum cleaners, fans, and hair dryers.