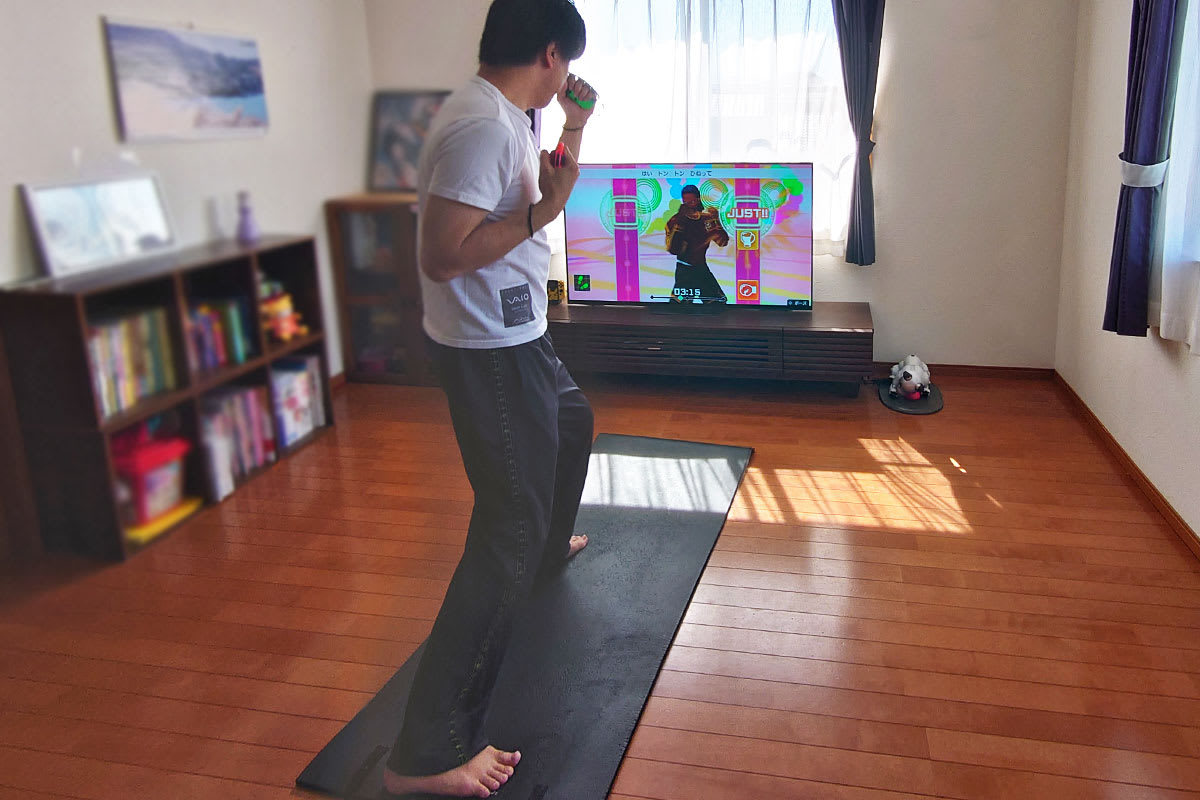 "I'll never gain weight." There was a time when I too thought like that.

I ate whatever I wanted and the reading on the scales never changed, so I assumed that would always be the case.

But of course, as the years passed, the more I ate the more my waist thickened and the higher the number on the scales grew.

I stay at home more these days, eat more, and exercise less. 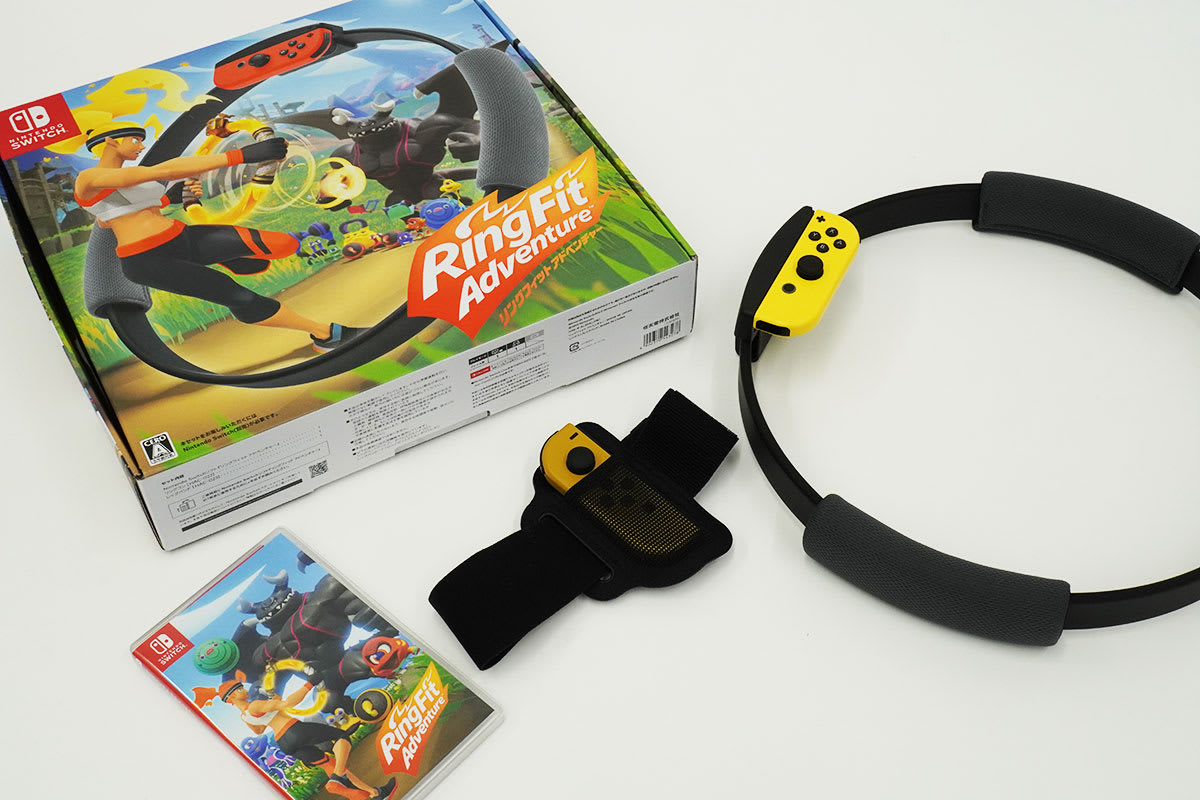 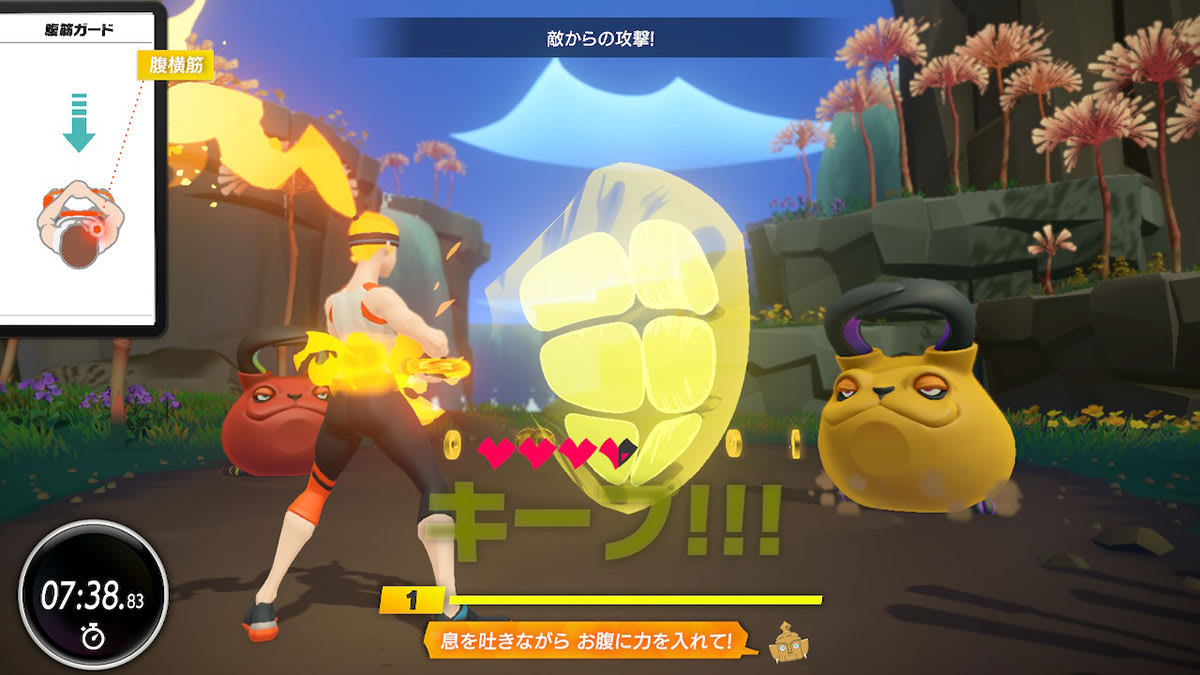 Realizing I had to do something about this, I took the plunge and bought the Nintendo Switch Ring Fit Adventure software for exercising at home. Maybe everyone was thinking the same thing as me... because there was a serious shortage of this particular product and it took an extremely long time to get ahold of one.

When I finally had Ring Fit Adventure in my hands, I discovered it was an amazing blend of adventure game factors like Dragon Quest and Super Mario Brother, and just the right amount of exercise.

Thanks to little snippets of advice here and there in the game, I was able to slowly learn about fitness. Consequently, I felt as though the "Diet God" had descended upon me and felt inspired to get my lazy body back in shape and get to the weight I always used to be. 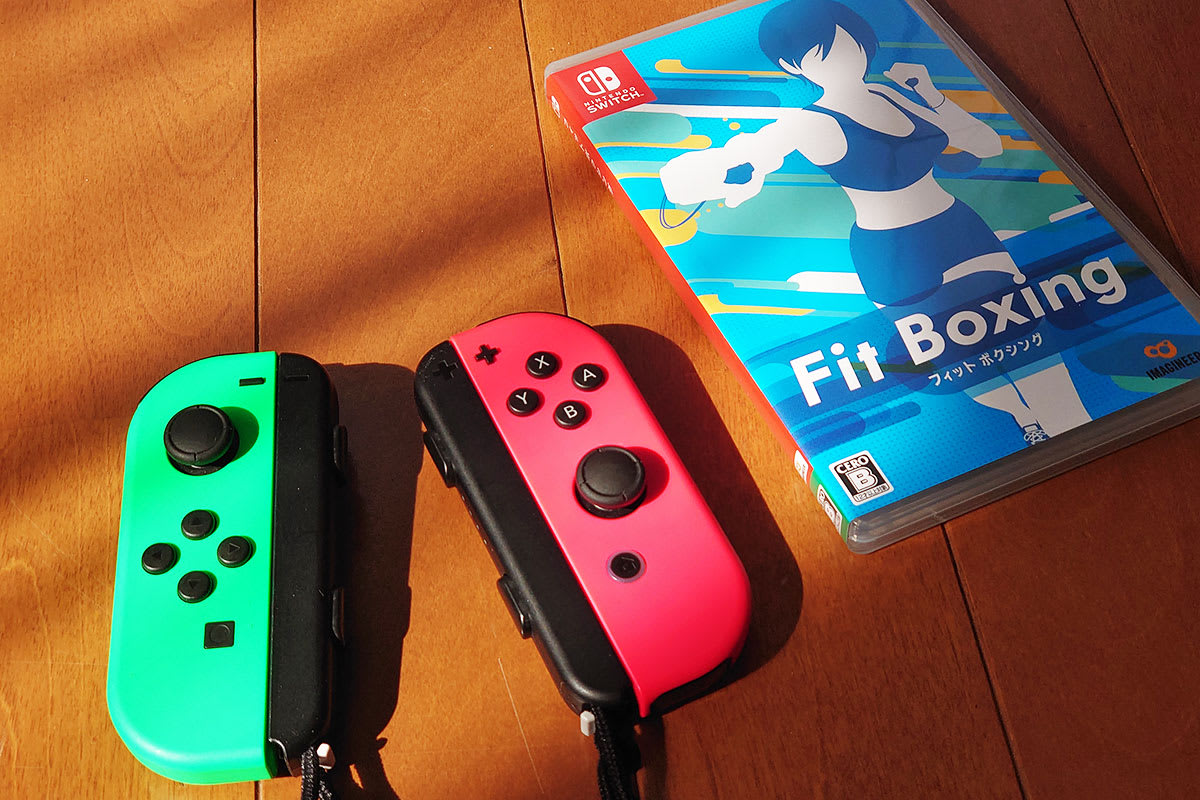 I caught wind of the fact that this was much more than just boxing-based exercise, and in fact used many famous voice actors as the voices of the trainers.

I bought it as an additional purchase feeling more than a little naughty that I could have fun by believing I was one of my favorite characters and losing weight at the same time.

Fit Boxing has a rhythm game-feel about it where the player uses the left and right Joy-Con controllers as gloves to throw punches. After experiencing Ring Fit Adventure, I thought a rhythm game would be a piece of cake.

But, the second I got started, I wanted to scold myself for being so presumptuous. I mean, I hadn't even realized that Ring Fit Adventure got much, much harder from the point where I had let off. 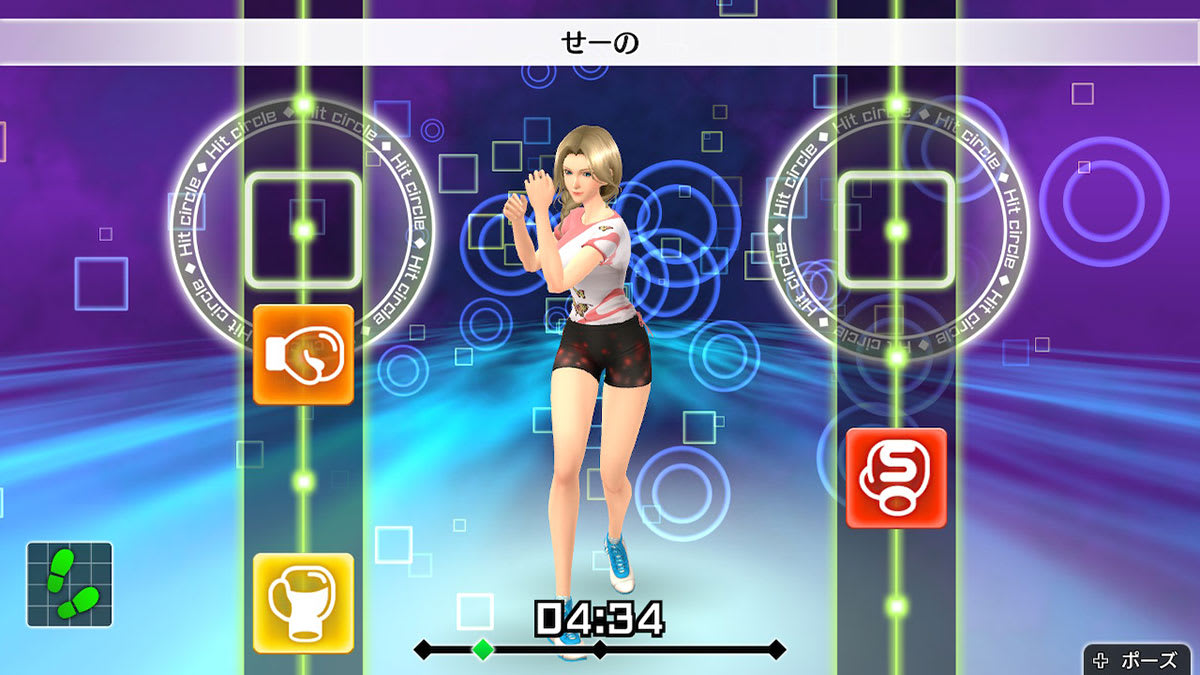 First, allow me to provide you with a serious review of Fit Boxing.

Roughly speaking, there is the Daily Mode which involves the player completing a daily routine, and a Free Mode, to freely choose the songs they want and which specific part of the body they want to tone up. Unlike an RPG, Fit Boxing does not entail a grand story. Rather, it's sole purpose is training.

Ring Fit Adventure takes a little effort to set up, not to mention it requires standing, sitting, and lying down in order to play. In contrast, players of Fit Boxing only need to use Joy-Con controllers and can essentially be played in a standing position.

For both software, the physical exertion increases the more serious you get, so I play on a thick mat to keep the noise down. 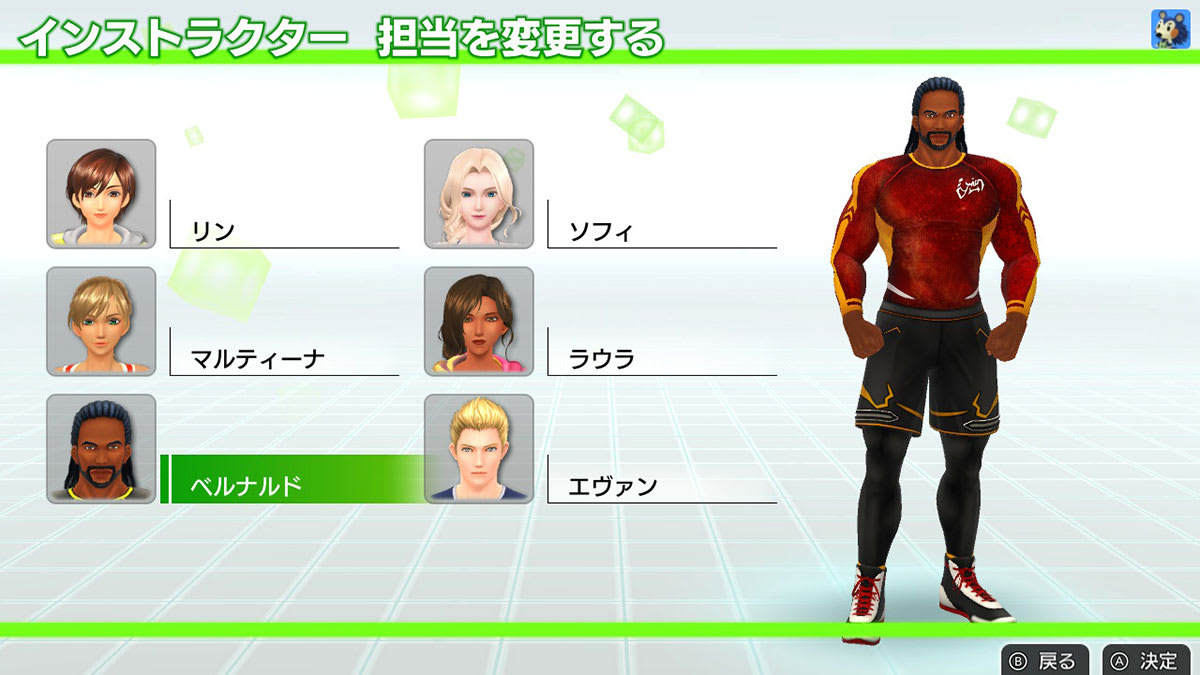 Without a doubt, one of my favorite parts is choosing my trainer.

There are six trainers in total.

What a fantastic lineup! I was like, "Wow! A Gundam voice actor!" and "Not one, but three Pretty Cure girls! So much fun to be had! 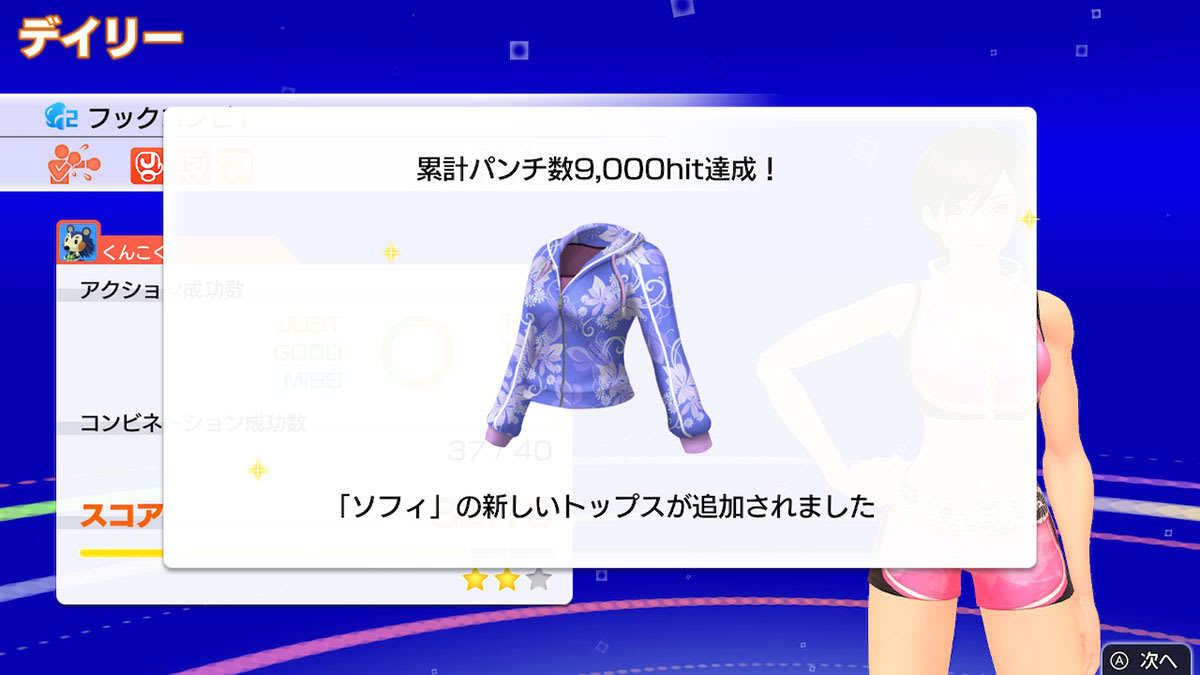 You can even change your trainer's hair style, skin tone, and eye color to your liking. The customization scope isn't too extensive, though.

Also, as a reward for training efforts, you can unlock new outfits for your trainers to change their look and create an even more enjoyable experience. 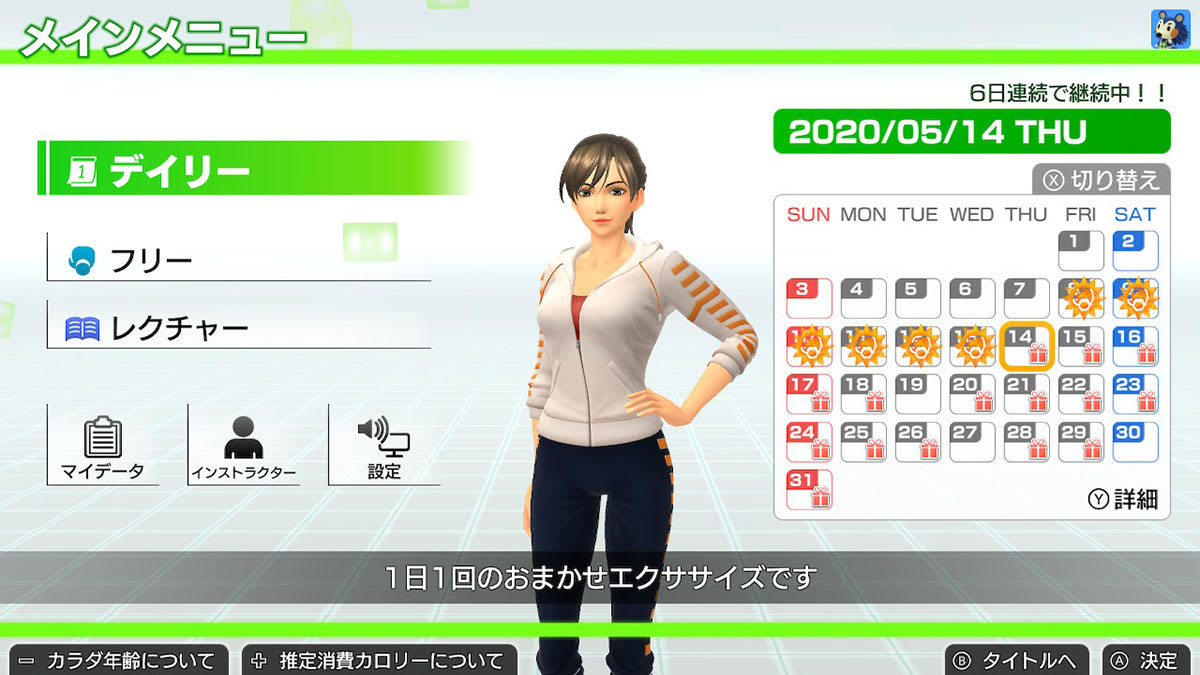 Then, once you've got your trainer, it's time to get started with a workout!

First, you can choose a plan, such as Diet, Body-Building, or Health Maintenance to suit your own specific goal. Naturally, I instantly selected the Diet plan.

Next, you can choose the specific area of your body you want to tone up; namely, upper arm, chest, waist, hip area, calves, or whole body. Personally, I wanted to shed the excess fat off my midriff that just keeps on creeping up on me so I chose the waist as my focus area. 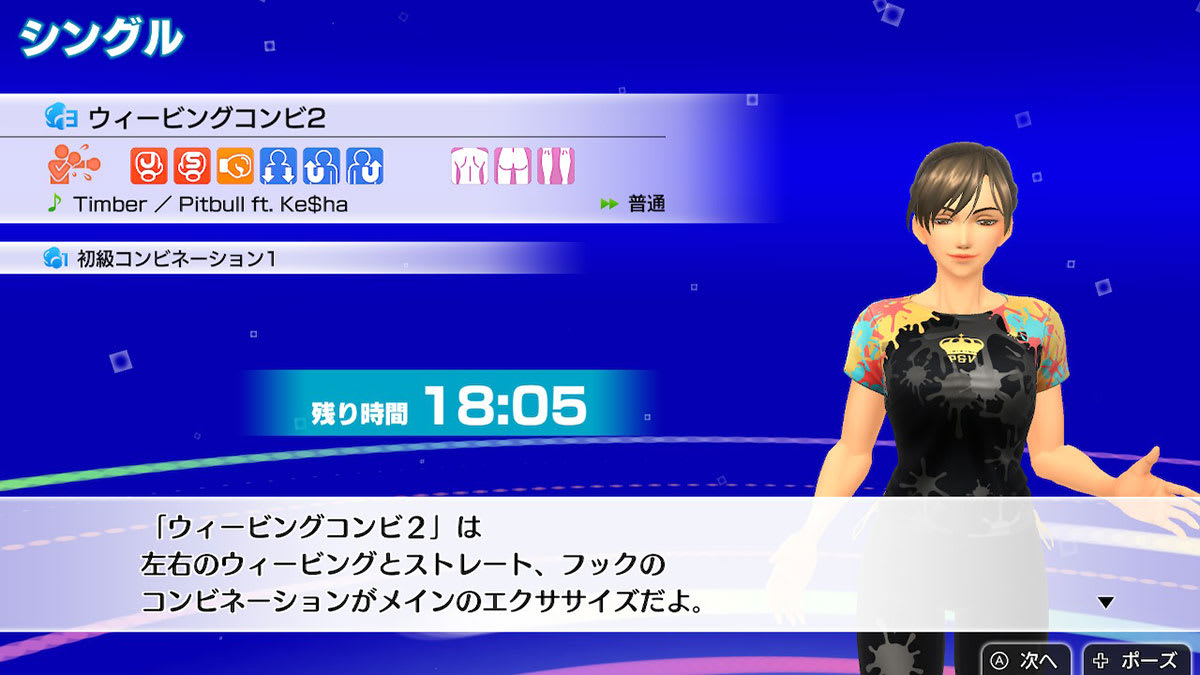 Another key point the player must choose is the duration of the training session. The four options are 10, 20, 35, and 45 minutes. The short ones are good for those who want to start out casually, and the long ones are better for those who mean business! I chose the 35 minute one just to see how I would do.

The routine starts off with some stretches. This part is the same as Ring Fit Adventure and there are stretches for both warming up and cooling down.

I've read plenty of boxing manga, like "Hajime no Ippo," "Ashita no Joe," and "Ring ni Kakero," so I prided myself that I knew a thing or two about boxing. As I am about to start, I feel as though I've just joined a gym and arrived for my first workout. 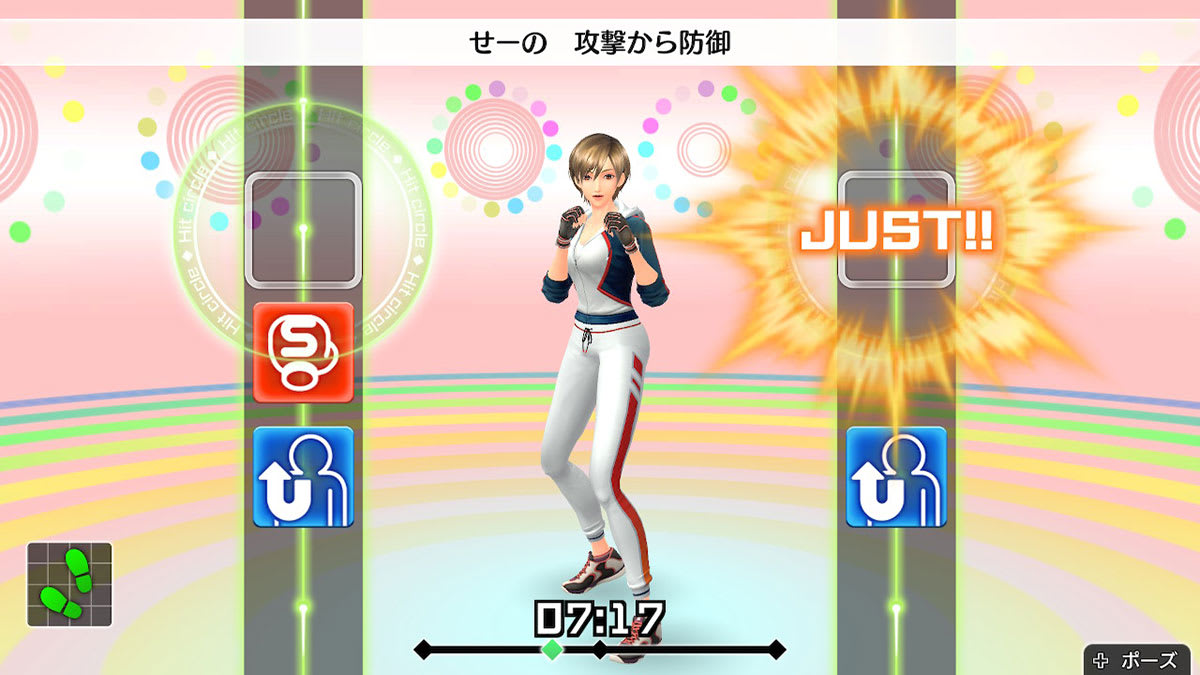 As per my trainer's advice, I turn my body 45 degrees, raise my right hand up beside my chin, my left hand in front of my face, then shift my body weight back and forth to the rhythm.

Just like a rhythm game, the player has to throw a jab, straight, etc. in time with the icon prompts.

There's music to accompany workouts and help you keep in time.

For a little while I was convinced I was boxing away nimbly (I felt like I was moving but in fact wasn't) and started getting excited, thinking "Yeah, I'm actually boxing now!," but then I started to notice changes in my condition.

As I inhaled, exhaled, and threw one punch after the next, my breathing grew heavier and heavier. "N-no way. T-this isn't meant to be a cardio workout," I huffed and puffed.

Much to my surprise, the part I struggled with the most was in fact the most basic of aspects - shifting my weight forwards and backwards.

You have to rhythmically rock your body back and forth, back and forth, at the same time as throwing punches at the correct timing, but I easily fell out of rhythm and got all flustered. (Apparently) to an observer, it appeared as though I was dancing very, very badly.

I was quite devastated to realize I had absolutely no rhythm whatsoever, therefore I should never let anyone see me attempting otherwise. 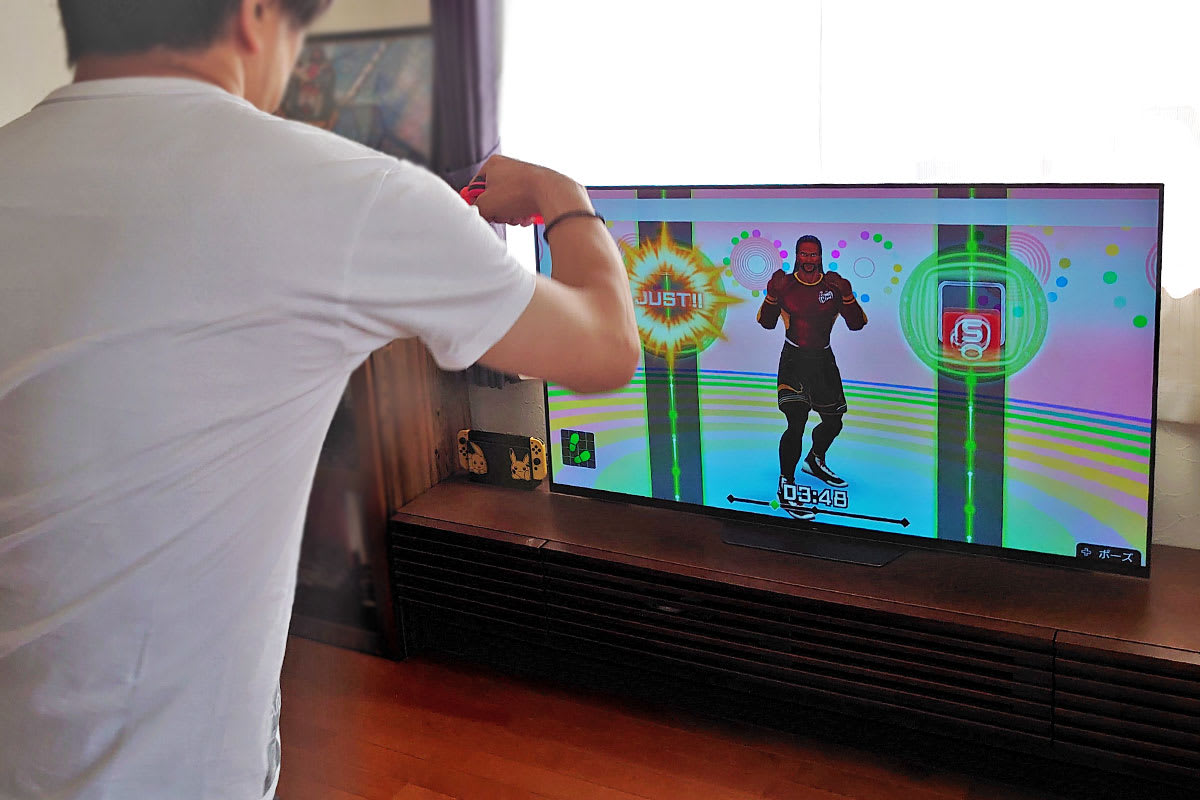 Essentially, one set lasts three to ten minutes and you can pause to rest part-way through a set, but even one set has me beat.

This experience made it painfully obvious just how little I'd exercised up until that point. The confidence I'd gained from defeating opponents in the fantasy land of Ring Fit Adventure evaporated in an instant.

It was clear I'd let the situation get way out of hand. I felt exactly as though I would if I had signed up for a casual aerobics session only to stumble into a hardcore boot camp tailored to the toughest of the tough. I must have been dreaming to believe I could actually pull off a Gazelle Punch or Dempsey Roll. I never thought I'd get to this age and be discouraged so badly.

But, thanks to my trainer, I mustered the will to keep going.

They praise me even when I wasn't doing that well, and offer me advice.

And to top it off, I get to hear the voices (converted in my brain) of Lalah, Alto, Cure Cosmo, and Snake.

"It's grueling, but I'll give it my best shot again tomorrow!" With that thought, I ended my first session. 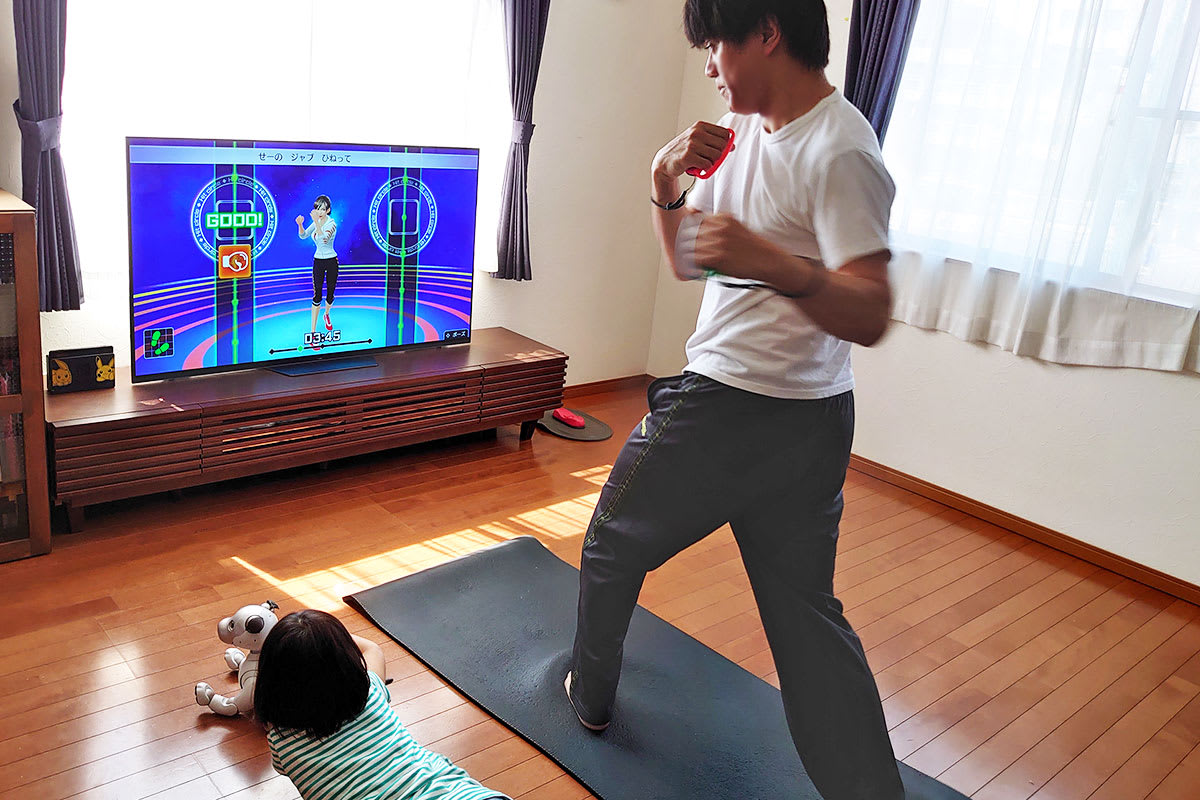 I switched on Fit Boxing the next day too.

Thanks to my trainers, even me, a complete and utter newbie, can stay motivated and not throw in the towel.

It's quite a pleasant experience to see the words "Spot on!" appear on the screen when I throw a punch at the perfect timing, and hear the encouraging words of the trainer.

Also, rather than simply flailing my arms around, with the proper advice, I'm able to learn a sequence of actions including moving my entire lower body by twisting my waist. In other words, I can get a feel for boxing by understanding not just with my head, but with my entire body.

From the third day onwards, it stopped being a struggle to do my workout every day. On the contrary, I became filled with a fighting spirit and developed a "Bring it on!" kind of attitude.

I changed the session duration to 45 minutes, thinking that I may as well go all out if I was going to do it anyway.

I didn't like how I couldn't really grip the Joy-Con controllers that tightly, so decided to make an Amazon purchase of grips specifically designed for use with Joy-Con. 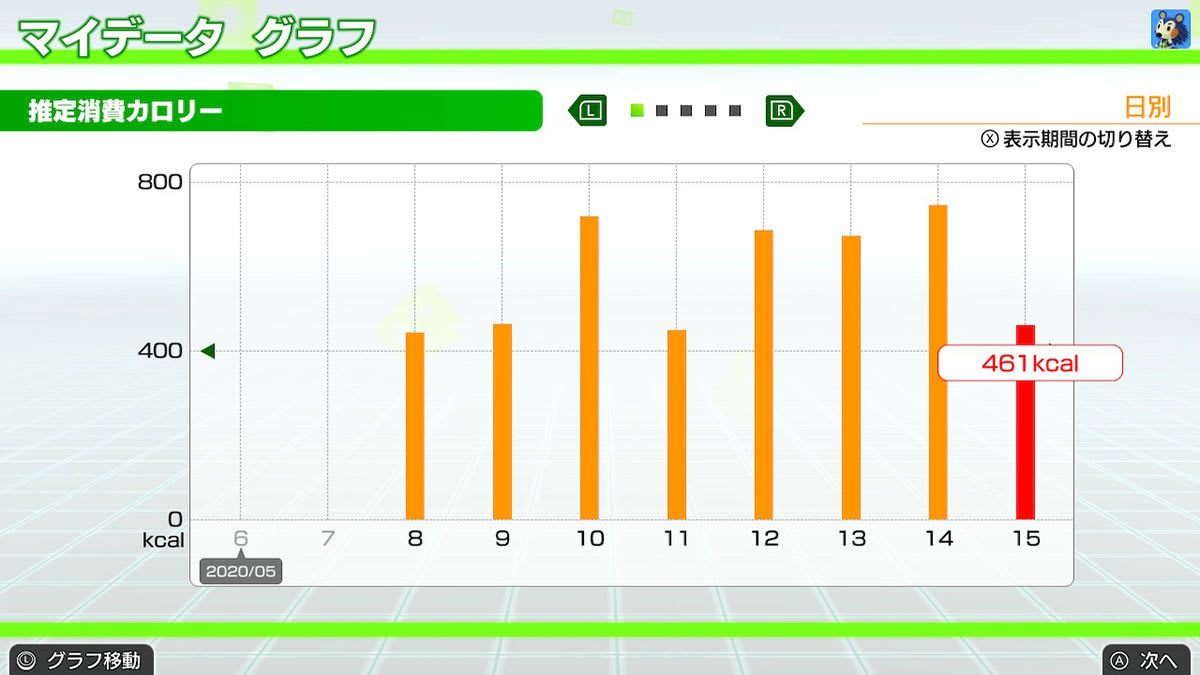 Like I've already mentioned several times, the aim of Fit Boxing is not to defeat a giant boss, but rather simply to box as a form of exercise.

In the first five minutes, the player will heat up and perspire like crazy.

By repeatedly throwing left and right punches, the player automatically strengthens their abdomen muscles, and slamming out a series of jabs combining whipping and stepping will really make the leg muscles go all quivery.

But that's a good thing.

It actually feels amazing to take off your sweat-soaked clothes afterwards and take a well-deserved shower.

Not to mention, seeing how many calories I burn during my session gives me an overwhelming sense of accomplishment.

Comparatively, Ring Fit Adventure focuses more on toning muscle and isn't as focused on burning calories. It's a game to build muscle while having fun.

The main aim of Fit Boxing is to give the player a good cardio workout so training for 45 minutes burns plenty of calories and is effective for dieting.

I've only been at it for around a week so I don't exactly feel that I've lost weight (maybe a kilo give or take) but I think I can at least say that I've lost a bit of the excess flab around my stomach area. 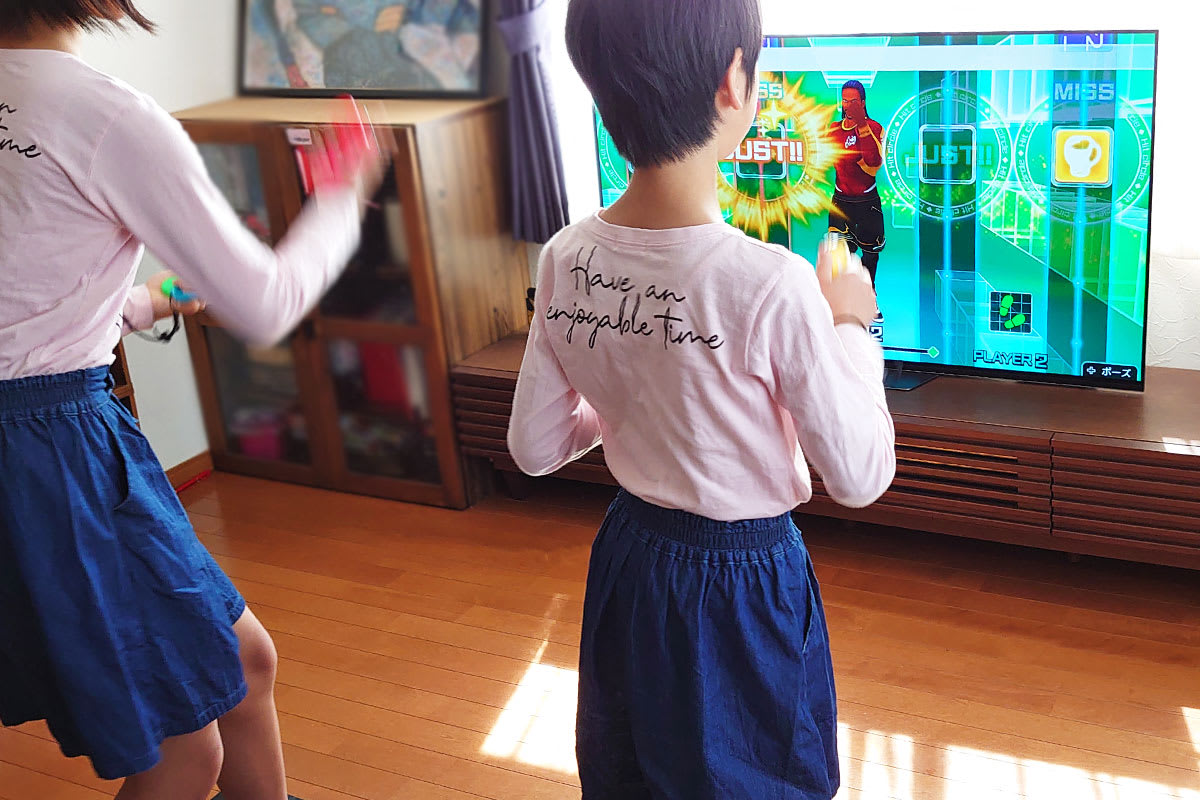 With Fit Boxing, you can both play or compete with another player.

When I gave my kids (who are elementary school) a go, they weren't really big on the boxing element, but they did get pretty excited about the duet when you have to synchronize with your partner, and the face-offs.

After all, it's easy to get hooked when there is a game-like feel about a software.

Recently the kids had hardly surfaced from their rooms due to their love of Animal Crossing: New Horizons, but thanks to Ring Fit Adventure and Fit Boxing, they come into the living room and play while getting physical exercise much more now, so that's a change for the better.

One of this game's charm points is that you can do it with peace of mind whenever you feel like; either on rainy days, hot days, cold days, early in the morning, or late at night.

I think it's great we live in a time where we can exercise while enjoying games. Now all that's left is to see whether I can keep it up until I actually lose some weight...

I truly hope a few months from now I'll be a trim and taut macho guy.