But the keyboard cover and pen are sold separately 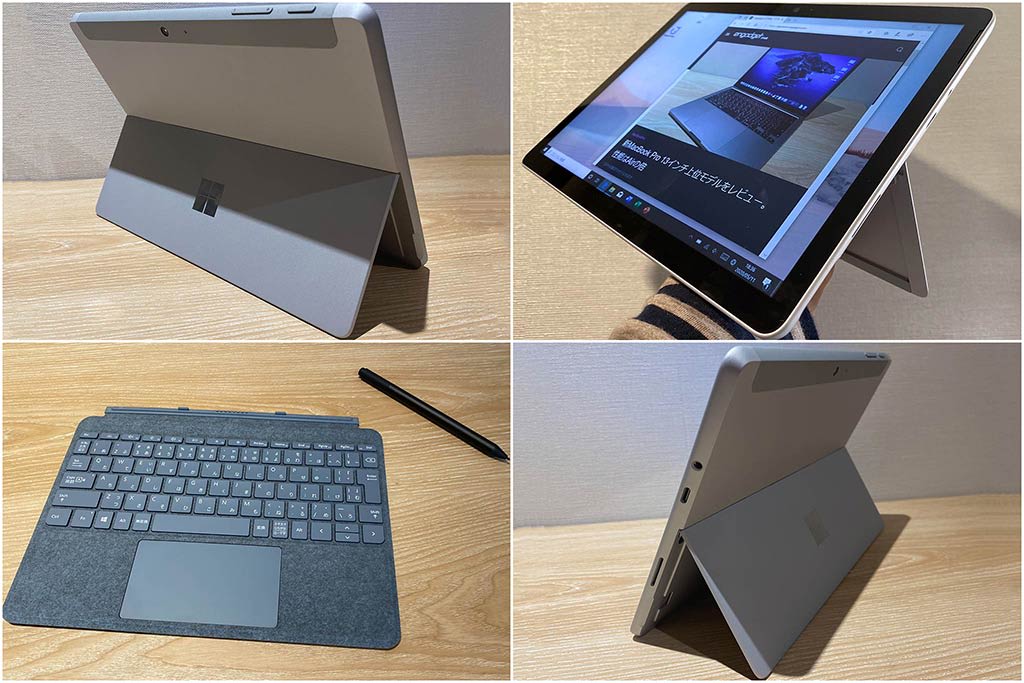 I'm here to give you my review of the new Microsoft "Surface Go 2" PC.

The Surface Go 2 is the cheapest machine in the Surface Series, and the smallest. Although you can't take full advantage of its portability given the current situation, it's great as a secondary PC for working from home, studying, or as a tablet.

There are three models of the Surface Go 2 available for sale. The model I tested was the "middle" option. Let's test its performance and usability. ▲The Surface Go 2. The keyboard and pen are sold separately.

The Surface Go and the Surface Pro are similar as they're both tablet PCs with a kickstand, which can be used with a separately sold keyboard and pen. Although you'll have to buy a keyboard, there are plenty of third-party options available. For this review, I was also sent the "Surface Go Type Cover (in Ice Blue)" and the "Surface Pen" to test. ▲The box. It contains the Surface Go 2 and charger. ▲The "Surface Go Type Cover" and "Surface Pen" I was lent for this review. ▲Many people use this setup. It's a lot like a lightweight 11-inch laptop. ▲Although the key size of the Type Cover keyboard is quite small, it has a standard layout. However, the "Q" row is positioned more to the left than a standard keyboard, so some people might find it a little peculiar when typing.

There are three classes of the Surface Go 2, the "standard models," the "corporate models," and the "educational models." There isn't much difference between the classes, but the price and internals do vary slightly.

There are three "standard models" available for general purchase. The weaker two of these use the "Pentium Gold 4425Y" for their CPU. They have 4GB and 8GB options for RAM, and 64GB and 128GB options for storage. The most powerful model uses the "Core m3-8100Y" for its CPU, and also features an LTE connection. As I mentioned earlier, the model I tested is the "middle" one, featuring the Pentium Gold 4425Y processor, 8GB of RAM, and 128GB of storage. Although it's unfortunate that I couldn't use the model featuring the new Core m3 processor, the model I tested offers the best balance between price and performance. ▲I was lent the model in the "middle." It uses the same CPU as the cheapest model, but has 8GB of RAM.

All of the standard models come with a license for "Office Home & Business 2019." This is great as it means you can use it out of the box. However, for those with an existing Microsoft 365 (Office 365) subscription, it does increase the price unnecessarily. This was the case with the previous models, but remains unchanged. This might influence the decision of those thinking about buying the Surface Go 2 as a secondary PC. ▲In addition to the Surface Go 2 and charger, you also get a license for "Office Home & Business 2019."


A larger display with the same design, and slightly improved performance

Other than the slightly larger display, I couldn't see any differences in the design of the Surface Go 2. The 10-inch display is now 10.5-inches, meaning that the bezel is relatively slimmer. This is an improvement, as the previous model had quite a wide bezel at the time of its release, giving it a slightly dated and "uncool" appearance.

So, other than this what else has changed? The truth is that you can't really tell by looking at it.

The Surface Go 2 has three ports, the "Surface Connector," a USB-C port, and a 3.5mm headphone jack. It has a kickstand and a camera on both the front and back sides. The thickness is identical to the previous version. It weighs an additional 20g, but this isn't noticeable. ▲The right side of the Surface Go 2. It has ports for the "Surface Connector," USB-C, and a 3.5mm headphone jack. ▲The left side of the Surface Go 2. It has no ports at all.

Functionally, the new stereo microphone array should make it easier for others to understand you during things like video conferences, but listeners said they couldn't hear any significant difference.

The weak point of the Surface Go is that "it's not so slow I can't use it, but it's not fast." You won't have any problem using it for a single task, but due to its slowness when you open multiple apps, it suffers when multitasking as you might do on your primary PC.

As an example, recently I was working from home and wanted to use a "virtual background." When a video conferencing app doesn't support this, you can use something like "SnapCamera." Changing my background using "SnapCamera" used over 50% of the CPU on the Surface Go 2. On a traditional laptop, it would use about 20 - 30%. Of course, this doesn't mean the Surface Go 2 can't do these sorts of things, but you can see how it could result in it not having the remaining necessary power for other tasks. ▲I used "SnapCamera" to test out a virtual background, but found that it used almost half of the CPU. The Surface Go 2 doesn't have a lot of power.

The high-end model with a "Core m3-8100Y" CPU is only faster when using its Turbo Boost function. However, it's possible that could make a big difference. Microsoft have said that Surface Go 2 has "64% more power than previous Go models." Although I didn't get to test it here, you're probably best going with the high-end model if you want a device with performance worthy of a primary PC.

The Wi-Fi connection has been updated to be "Wi-Fi 6" compatible. As such, it's probably the ideal portable PC to use as an alternative to your primary PC for communication, or to view content.

In the end, the performance of the Surface Go 2 makes it hard to assess. It's really well made and finished. Honestly, the body, the display, and the kickstand all feel like they belong on something far more expensive than the device actually is. However, the processing power of the Surface Go 2 is slightly sluggish. Except for that one small inconvenience, the physical design of the device is great.

As I mentioned earlier, getting the keyboard and pen can get quite expensive. For those who want performance, going for the high-end model will bring the price to about 130,000 yen. For that sort of price, you can get a mobile laptops with a Core i series processor.

On that note, despite its performance, I'd say that the Surface Go 2 is a well-finished Windows tablet ideal for those who need a secondary computer.