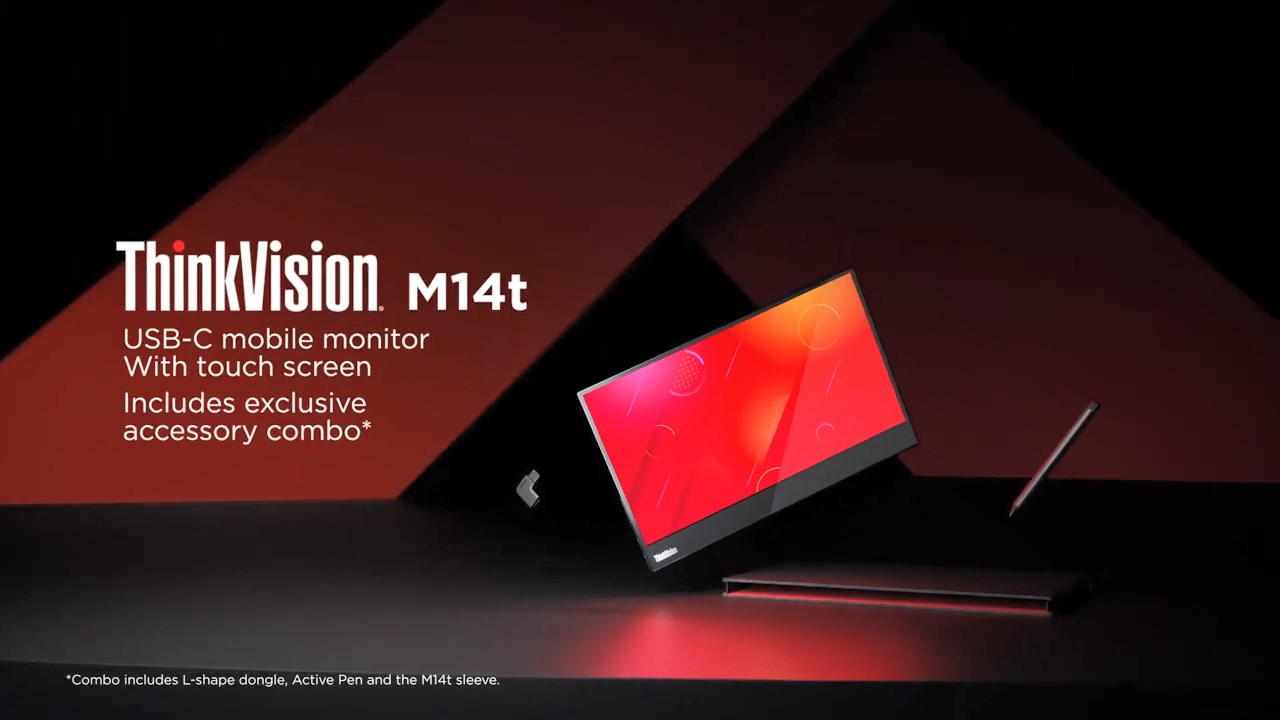 One of the hottest categories among PC manufacturers who are focusing on peripherals these days is mobile displays. From a different perspective, it can be said that this is a market in which major manufacturers have finally entered in earnest. In recent years, many products have been released, mainly by foreign PC manufacturers.

As the number of manufacturers entering the market increases, one of the areas that are naturally gaining momentum is the development of high functionality. Lenovo has released a new model of the ThinkVision series in the U.S., a product that seems to hint at this direction.

The model name is "ThinkVision M14t". It has a 14-inch screen size and a full HD (1920 x 1080) resolution. It is scheduled to be released a little further down the line, in September, with an estimated market price of $449.

The feature of this product is that it supports pen and touch input, which has never been seen before in this category. In other words, it is a product that can be called an LCD pen tablet in a different category.

And at 698 grams, it's relatively light for a mobile display.

There is not much information about the pen input specifications that we are interested in at the moment. The only thing we know is that it has 4096 levels of pressure detection and unfortunately the pen it comes with is the Lenovo Active Pen.

Considering the pressure sensitivity, the number of pen buttons is at least two, as you can see in the official video, and the recent trend of the company's pen-enabled devices, the base technology is MPP (Microsoft Pen Protocol) 2.0 support, I assume. But this is a concern, along with the degree of parallax shift and line blurring at the nib that does not appear in the official specifications.

In addition, the touch panel supports 10-point multi-touch. Of course, only one USB Type-C cable is needed to connect to the PC (including pen input and touch).

Another feature is that it's light for a mobile display. In fact, 14-inch and larger mobile displays are surprisingly heavy, especially for a 15.6-inch model, which is the mainstream market, the average weight is around 800 grams.

In fact, this unit has a sibling model called the ThinkVision M14, which is already available in Japan. This M14 unmarked is a 14-inch mobile display, just like the M14t. It doesn't support both pen and touch, but it's extremely light, weighing only about 570 grams. The lightness of the M14t can be said to be the result of the M14's know-how.

It also has a high degree of flexibility in terms of installation, which is a feature of the M14 Muji. The first thing that is worth mentioning is the angle adjustment. A hinge connection between the compact control board and the LCD screen allows for smoother angle adjustment than on rival models, which generally have less flexibility.

In addition, there is a folding stand at the bottom that can be extended to raise the screen even higher.

In terms of connectivity, it has a convenient USB Type-C power pass-through function. Using the two Type-C ports on board, a connection pattern of "AC adapter to notebook PC via display" makes it possible to connect the unit to an AC adapter with a single Type-C port.

Reference article (at the time of the M14 announcement):

One of the hidden features is that it has an automatic rotation sensor. While there are many products that support vertical orientation in mobile displays, there are not many models that can automatically detect a change in orientation using a sensor.

In addition, changing the resolution is done at the hardware level, so there is no need for dedicated apps or drivers on the PC.

In addition, this product also comes with a USB Type-C L-shaped adapter, which is convenient for vertical placement. It is designed with the appearance of the cable in mind. In addition, an exclusive sleeve case with an exclusive pen and pen holder is included as an accessory.

The basic specifications of the display are also above the standard for mobile products. The LCD panel uses IPS technology (from the official video) with a wide viewing angle, maintains a maximum brightness of 300 nits (nitrate), and is equipped with a TÜV Rheinland certified blue light reduction function.

As you can see, the ThinkVision M14t is a model that adds pen input and a touch screen to the M14 Muji, which was highly regarded as a mobile display.

There are some mobile display products with touchscreen support, but pen input support is very rare, at least for consumers. In addition, when it comes to products with the performance standards required in recent years, the M14t can be called a one-of-a-kind device.

There is no doubt that the M14t is a very distinctive model in this respect.

In terms of price, it is expensive because it is equipped with a pen input, but we are sure that it is a type of product that "sticks out to the users who need it".

Considering the recent development of the ThinkVision series, there's a good chance this device will be released in Japan, so we'll be waiting for this model with great expectations.