Review of the 11,980 yen (tax incl.) Fire HD Plus. A look at how you can use this bargain-priced tablet

Although it’s a little unresponsive when scrolling, it’s not too noticeable 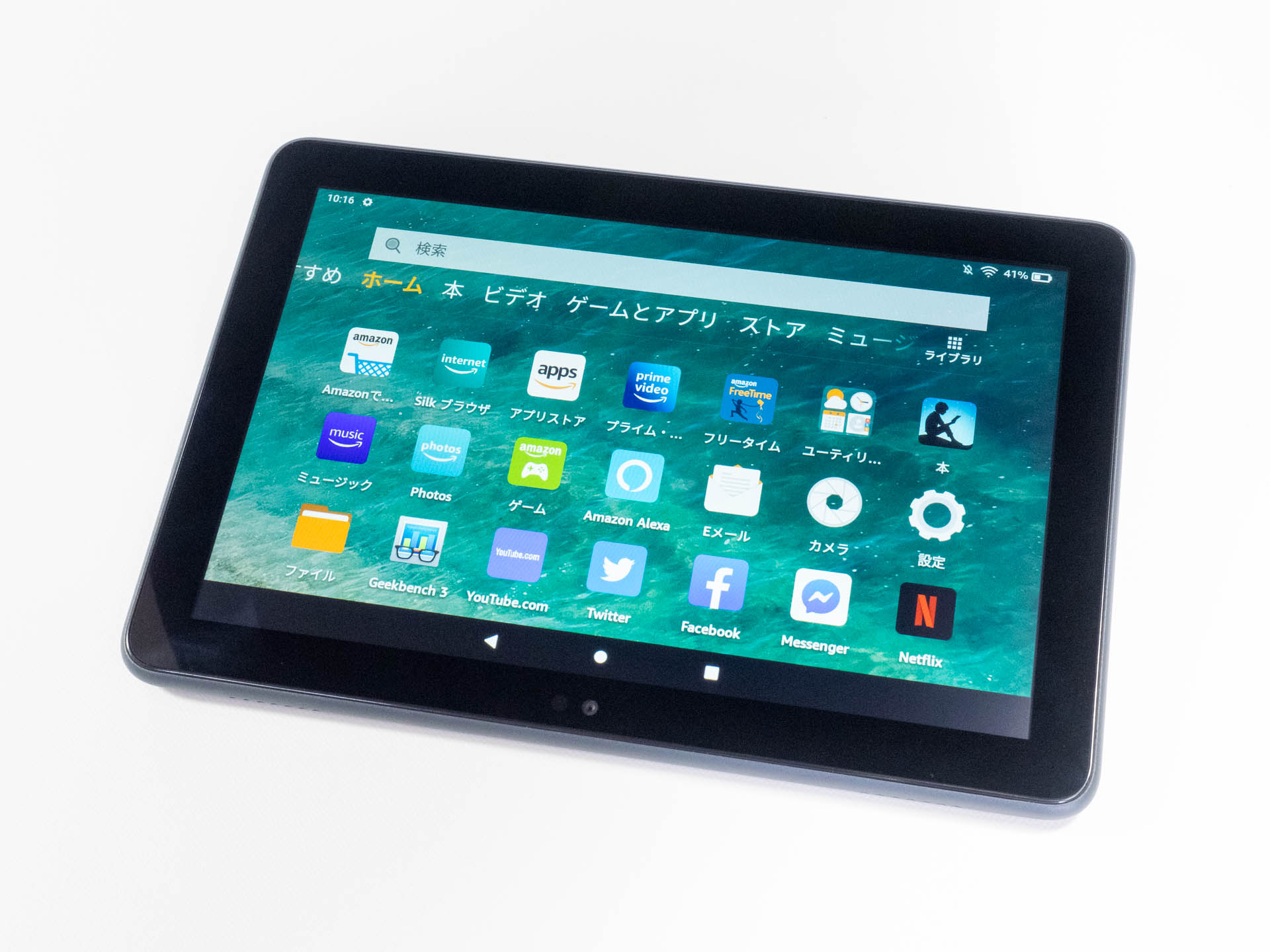 The 10th generation of Amazon’s Fire HD 8 Plus tablet was announced on May 13th. It’s released on June 3rd, and I received it that day as I pre-ordered it. There are two models of the Fire HD 8 Plus available, with different storage capacities. I purchased the 32GB model, which costs 11,980 yen. The other model has 64GB of storage and costs 13,980 yen. 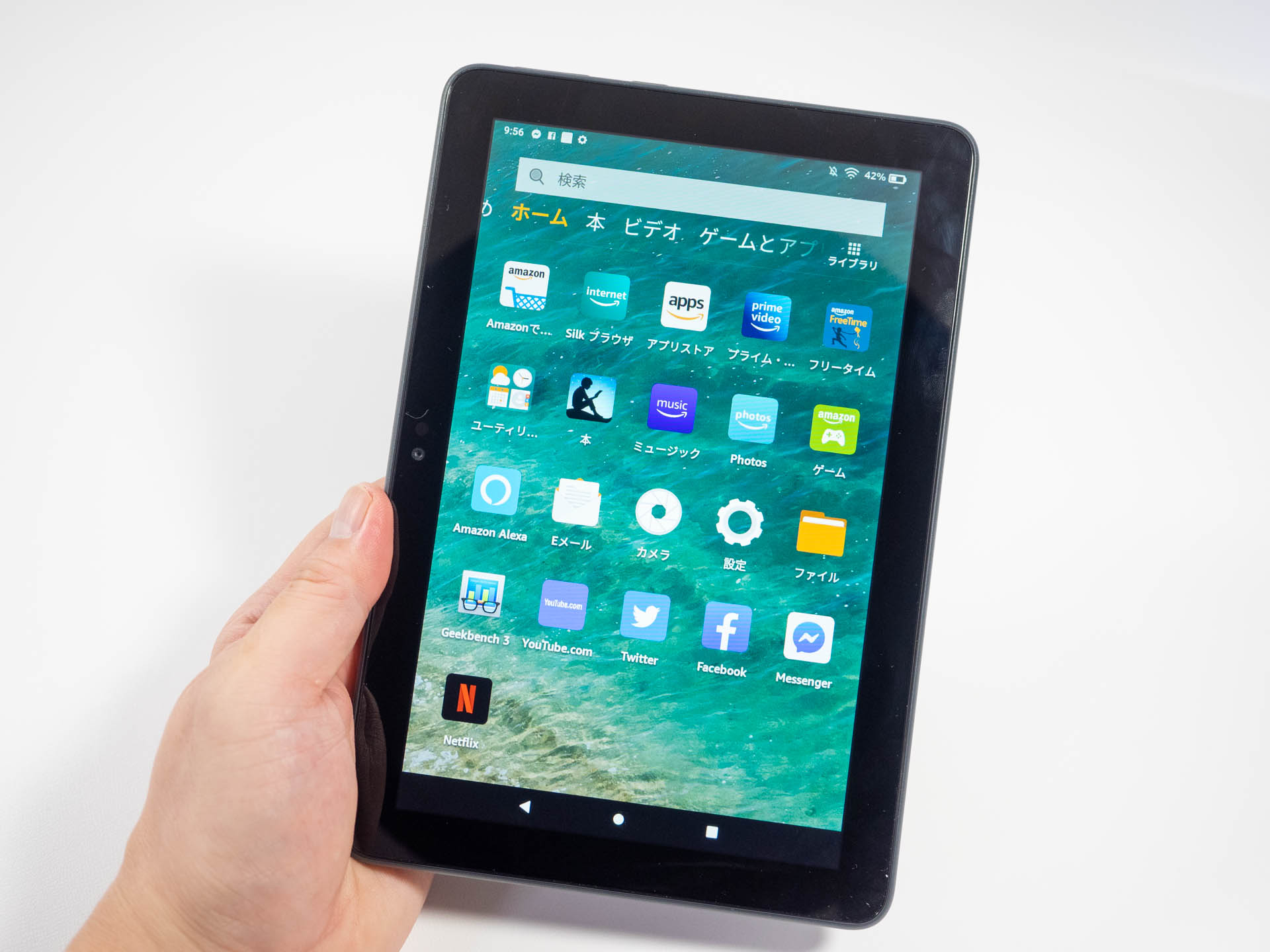 It has an 8-inch display with a resolution of 1280x800 pixels. It’s unfortunate that the display isn’t full HD, but the resolution is high enough that you can’t see any pixelization. When compared to the latest high-end tablets, the bezel of the display is quite thick. However, the main purpose of this tablet is for viewing content and reading books. From that perspective the thick bezel is quite good, as it means your hand doesn’t obscure the display when holding the tablet. 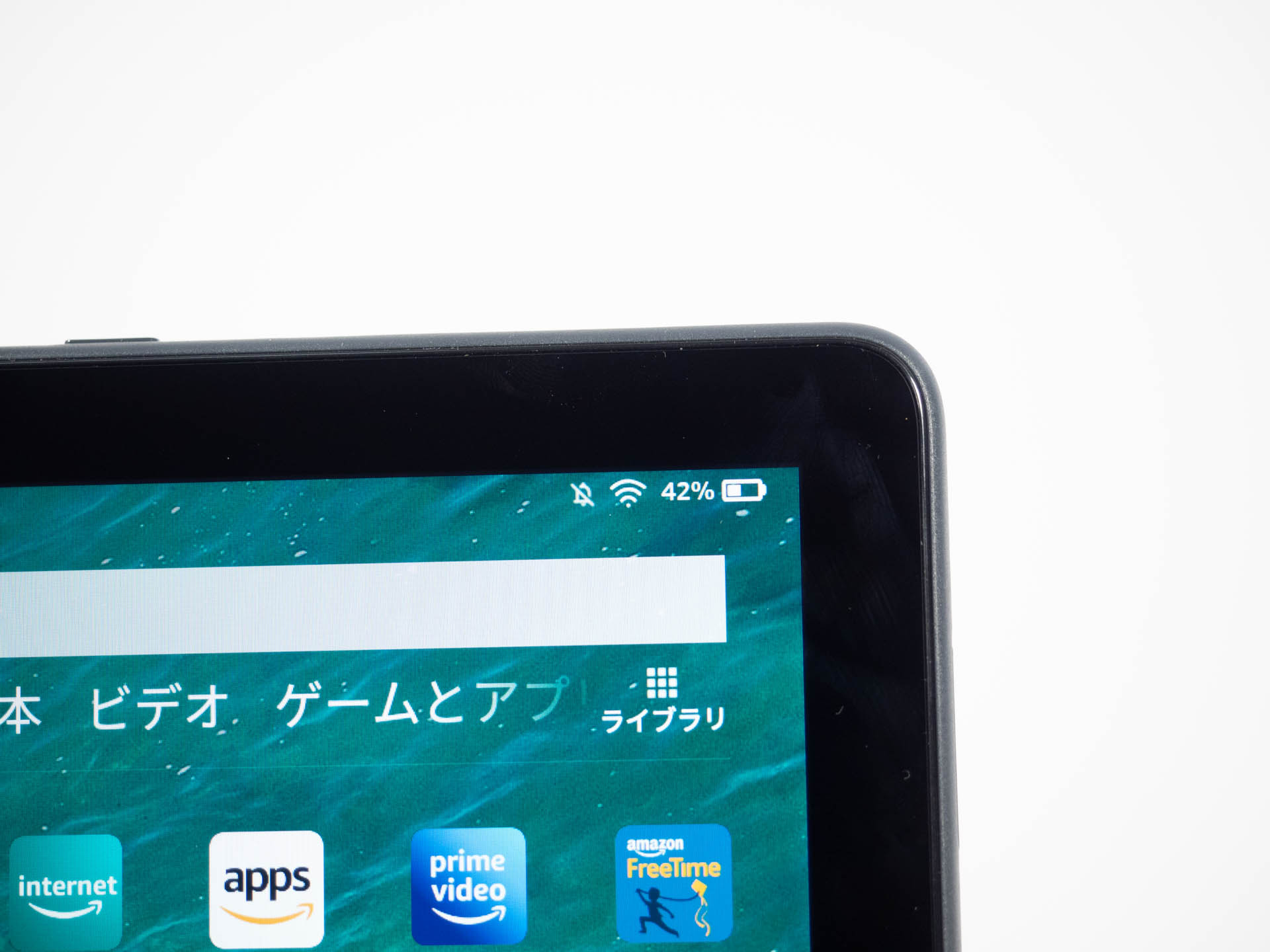 ▲ Although the bezel is noticeably wide, it means that your hand doesn’t obscure the display when viewing content on the tablet

According to the official website, it has a quad-core 2.0GHz processor. I checked the specifications using an app, and it uses the MT8168A processor made by MediaTek. It has 3GB of memory, the most out of all of the currently available Fire tablets.

When I started up the device and used it, I felt that scrolling and switching between apps was a little slow, which might be due to the processor. It just doesn’t feel as quick and responsive as the latest smartphones and tablets. However, it wasn’t so slow you couldn't use it comfortably. This is likely a result of the increased 3GB of memory.

There were no problems when using the Kindle app to read novels or manga, or YouTube or Netflix to watch video content. Although I felt like the device was a bit unresponsive on the home screen or when scrolling, I could comfortably and smoothly read books and watch videos. 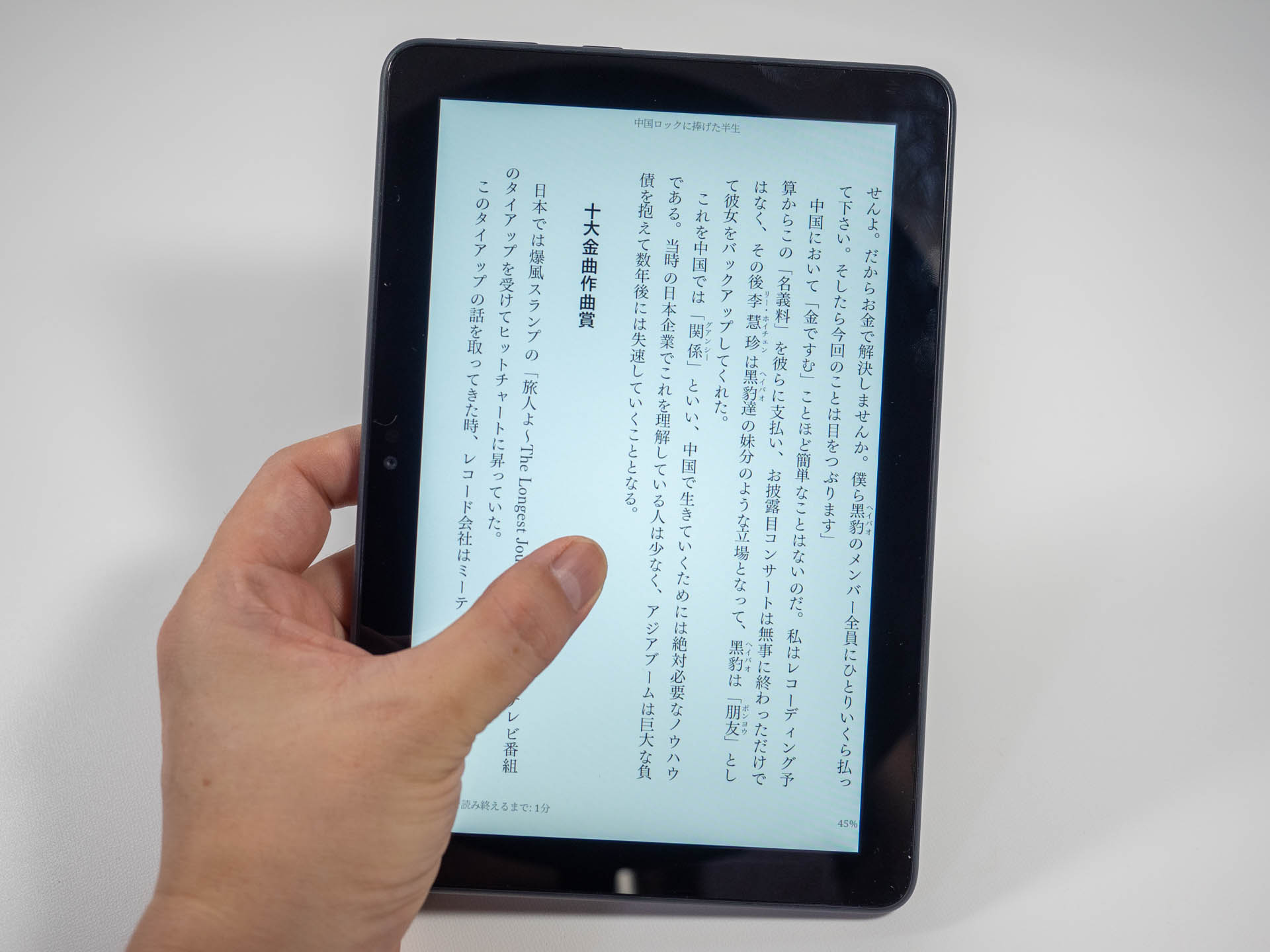 ▲Changing pages when reading is smooth 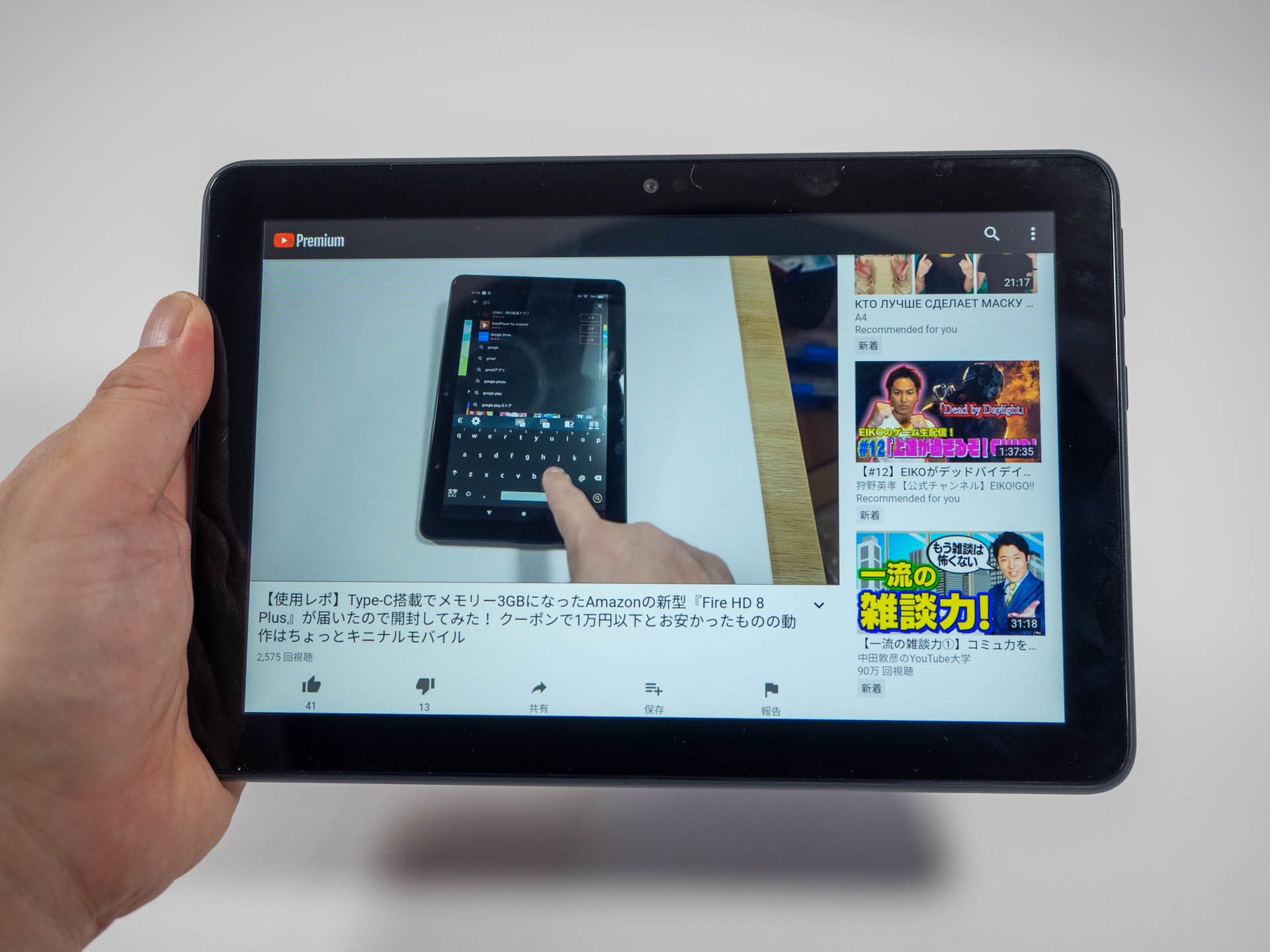 ▲ Video playback is stable when you play a video

The speaker uses Dolby Atmos compatible stereo speakers that are clear with great sound quality. When the tablet’s held in landscape orientation the speakers are on the top side of the tablet, which means that the sound isn’t muffled.

When held in landscape orientation, you’ll find the volume and power buttons, headphone jack and USB port on the right side of the tablet. Although previous models used Micro-USB, this one uses USB-C. However, it uses the 2.0 USB standard, so isn’t compatible with USB-C PD. The included charger is supposed to be 5.2V/1.8A with an output of 9W, but when I measured it with an electrical tester it was 5.1V/1.2A. 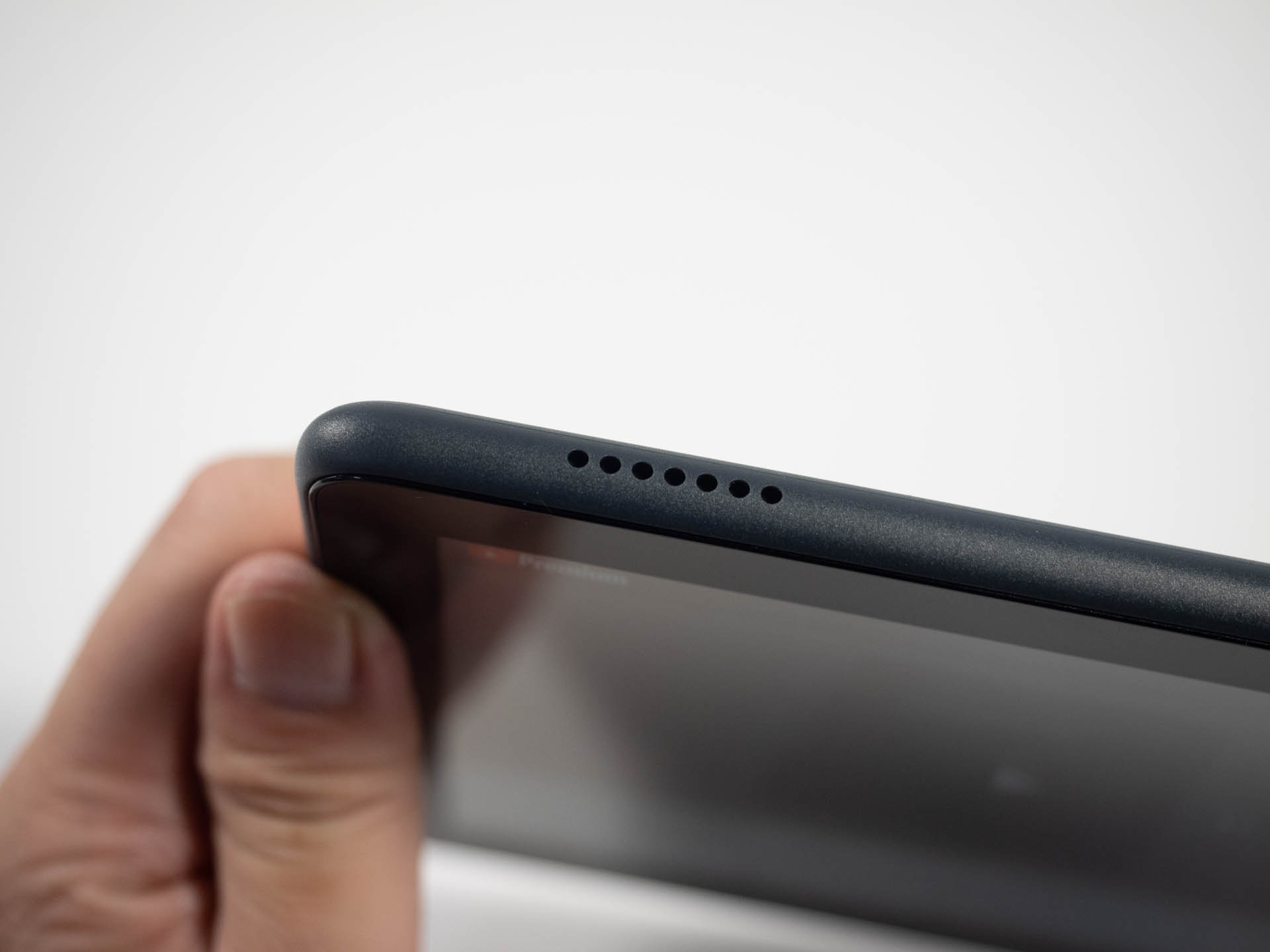 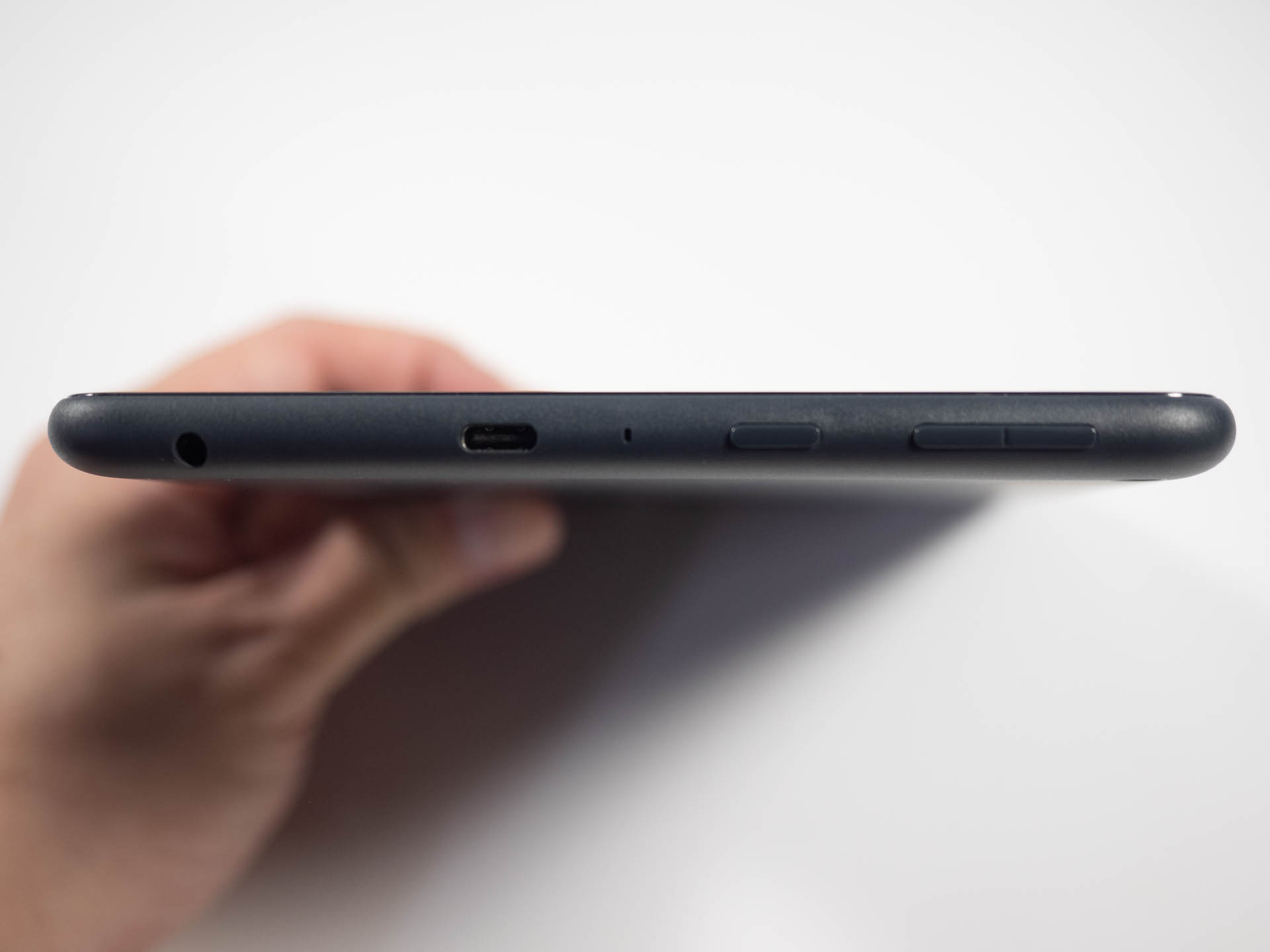 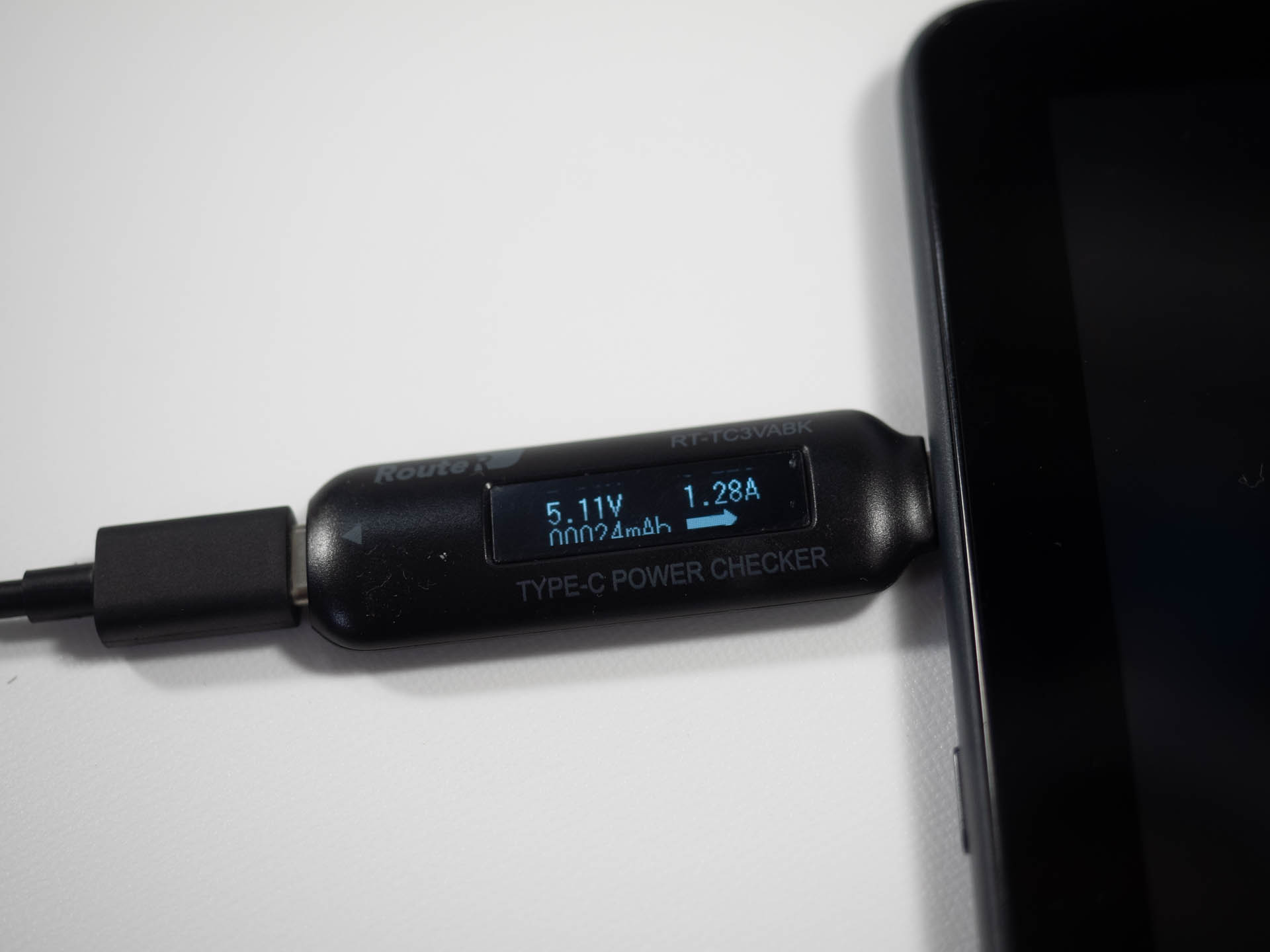 ▲ The results on the electrical tester while charging 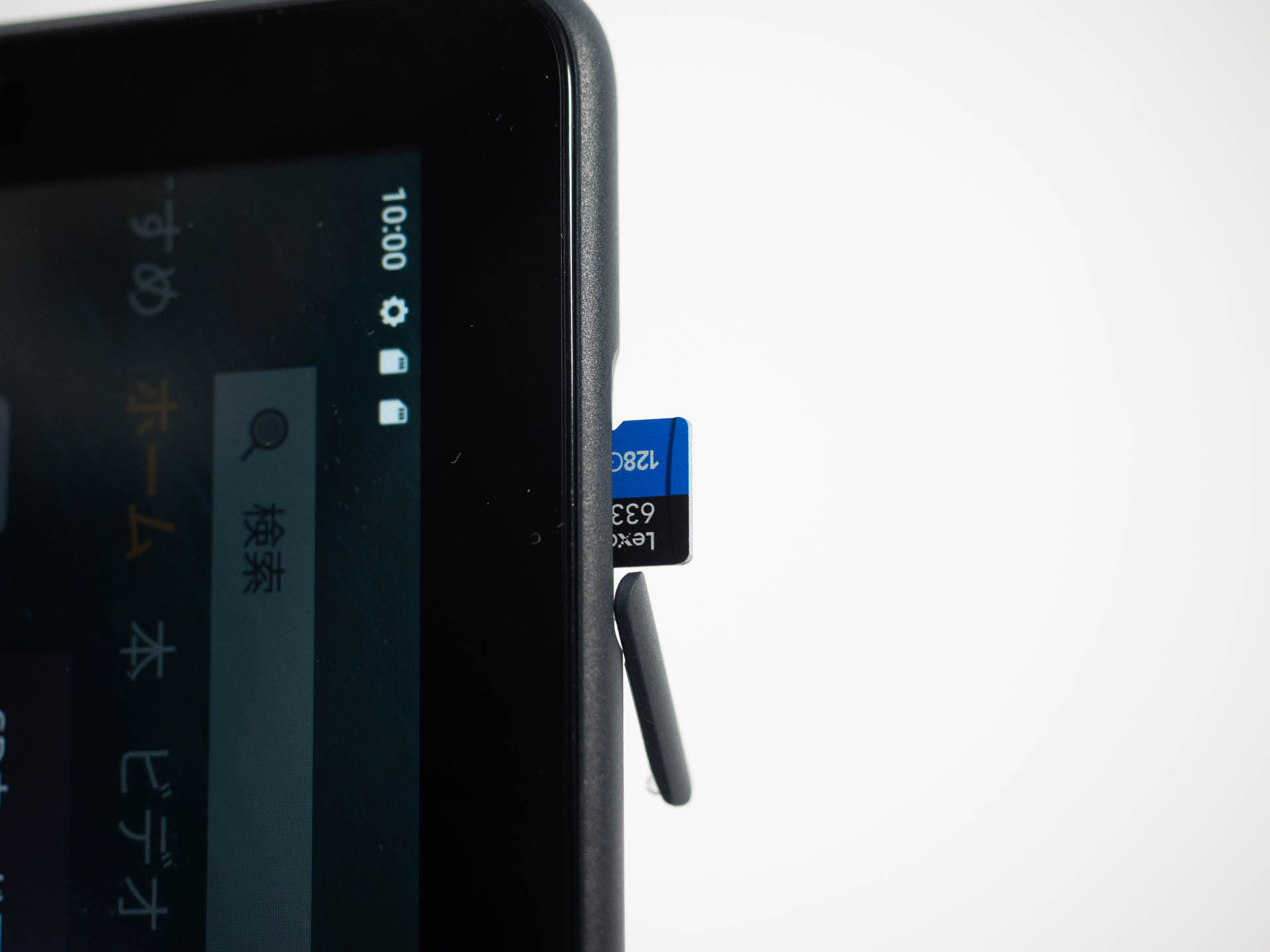 ▲ The installed micro SD card slot, compatible with cards with a capacity of up to 1TB

The device has dimensions of about 202 (width) x 9.7 (depth) x137 (height) mm and a weight of 355g. The back is made of matte plastic and doesn’t feel cheap. Fingerprints don’t stand out on it. However fingerprints and smudges do stand out on the screen. I’ll think I’ll deal with this by sticking a fingerprint-resistant screen protector on it. 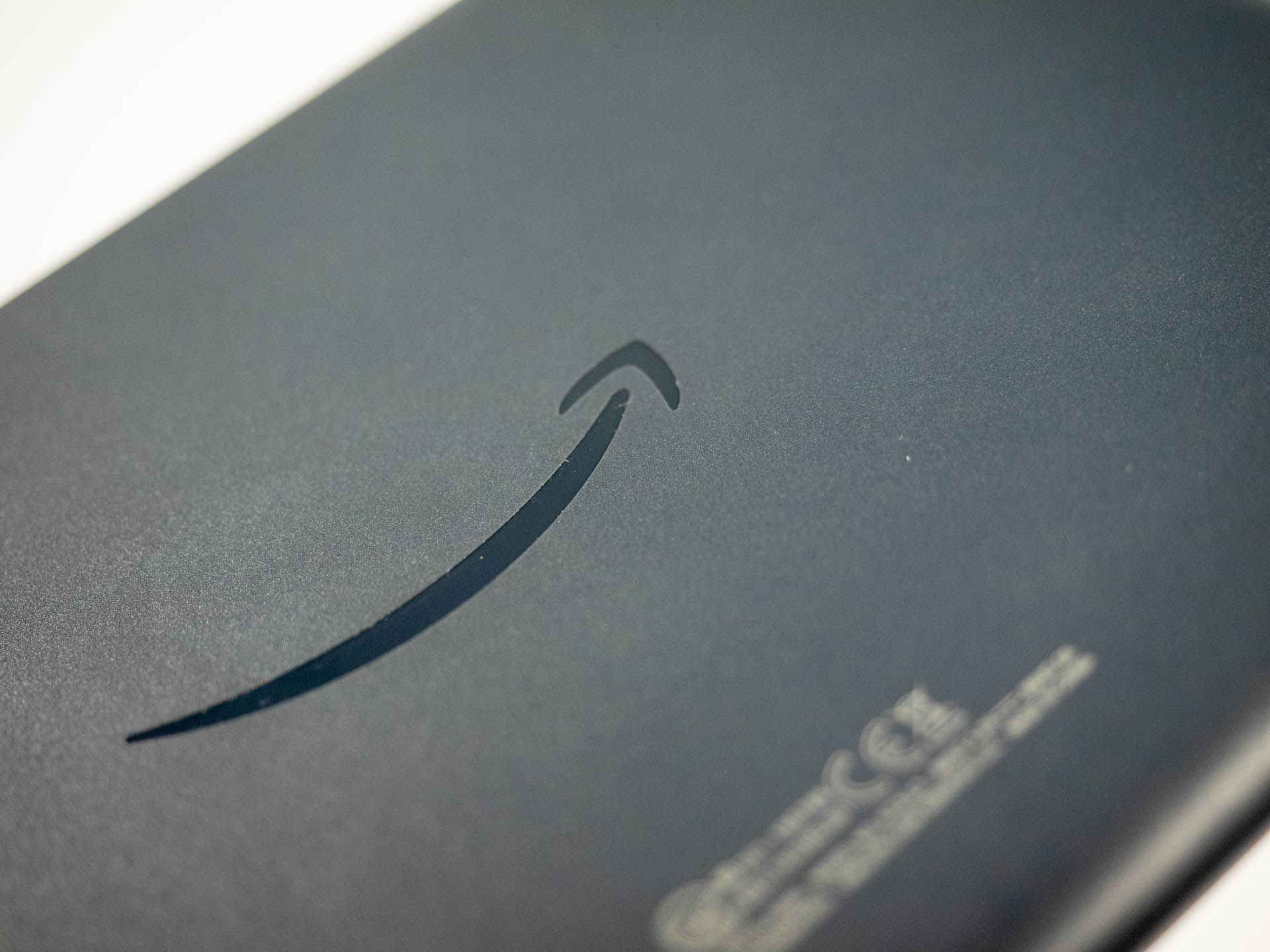 ▲ The back of the device has a rough matte finish 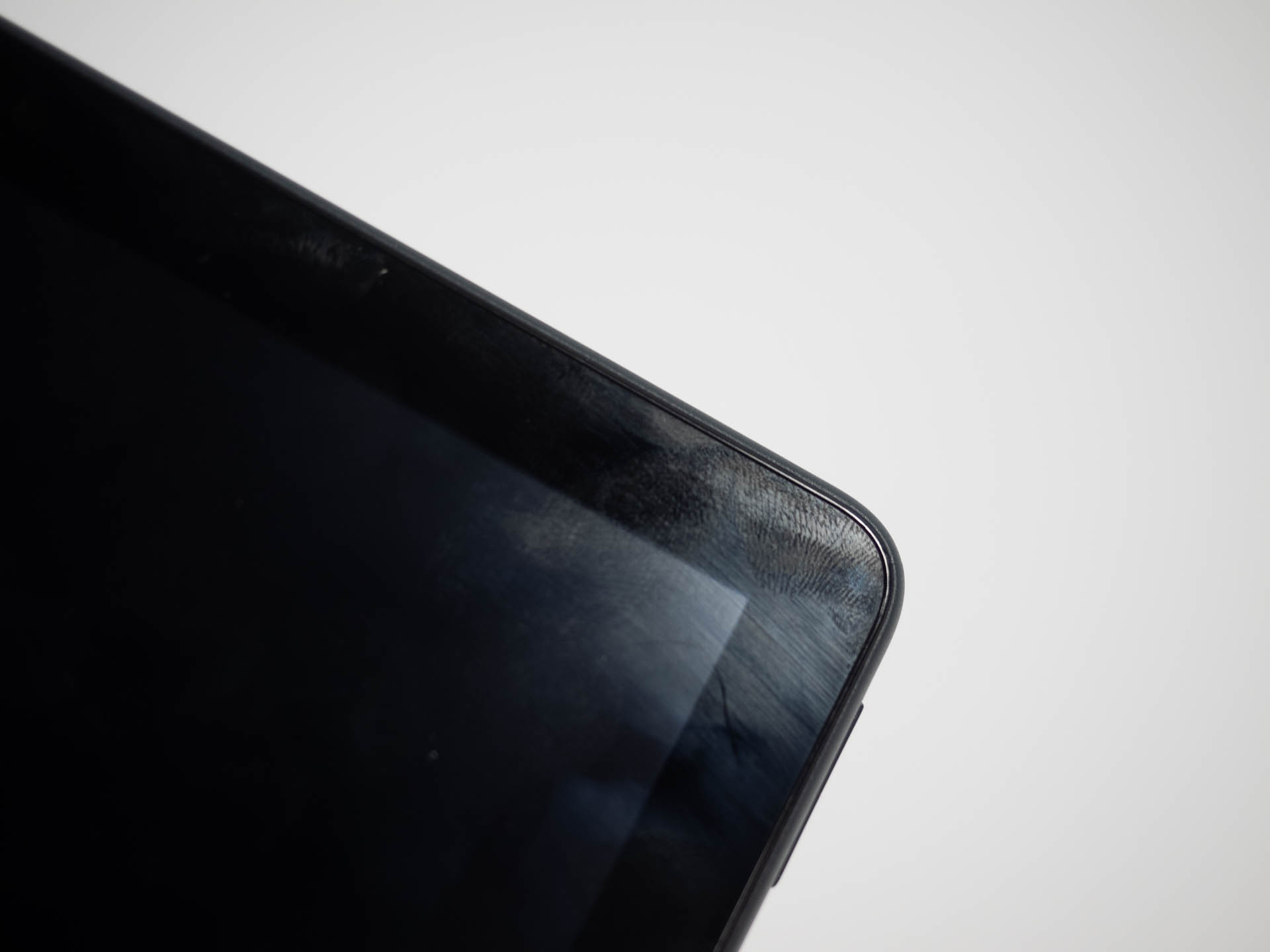 ▲ Fingerprints stand out on the screen

Also the exact capacity of the battery wasn’t publicly announced, but it can be used for a maximum of 12 hours of continuous use. In addition to using USB-C, you can also charge the device wirelessly using a special wireless charging stand sold separately.

Unfortunately, I didn’t purchase the wireless charging stand, so I couldn’t test it. However, I did try it with a third party charger by Qi and it started charging. 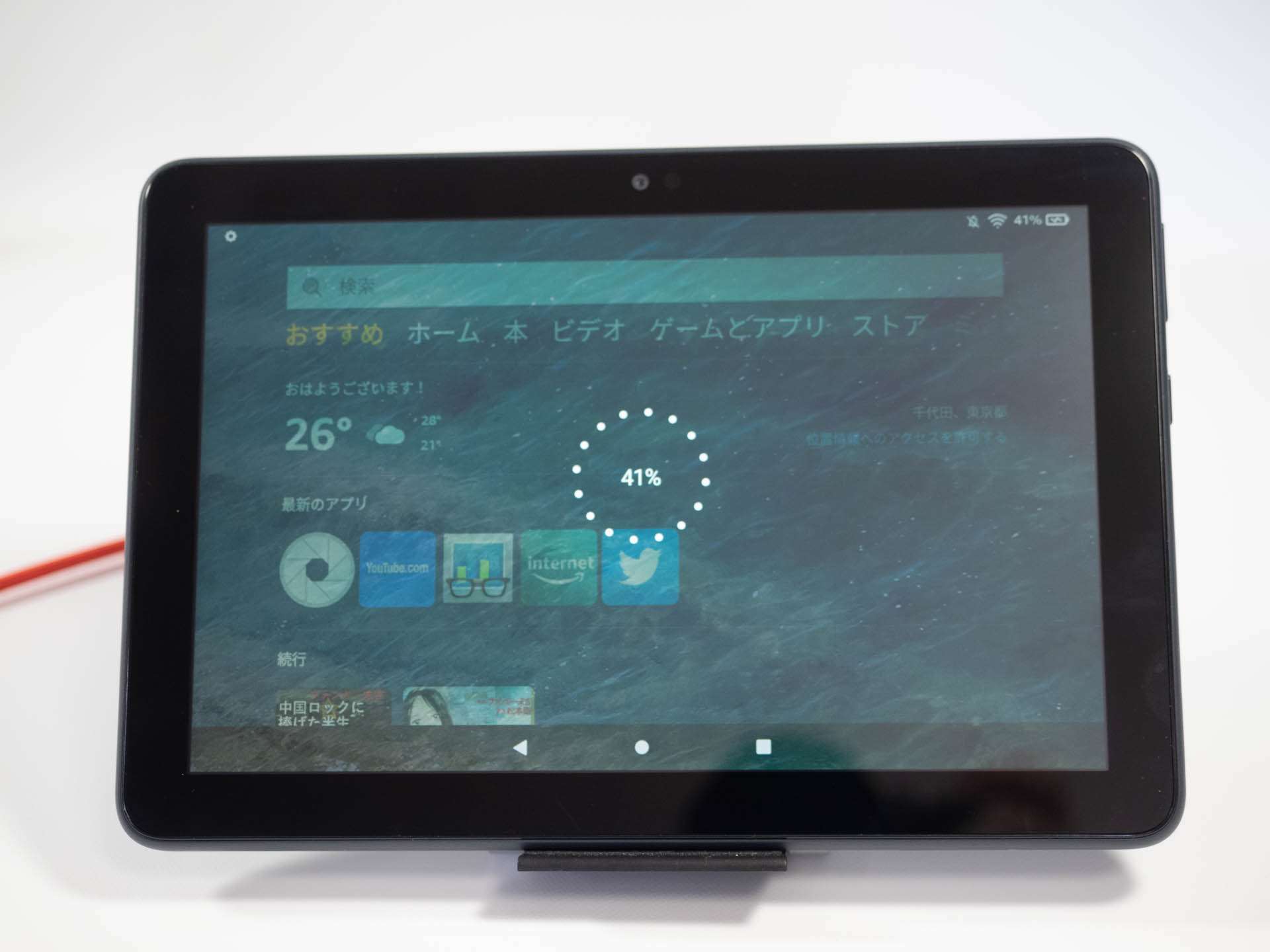 The main camera on the back is 2-megapixels, and there’s also one on the front. Although the camera application has a night mode, the image quality isn’t that great if you want to use it for photography. It’s only really suitable for taking pictures of little things you want to remember. 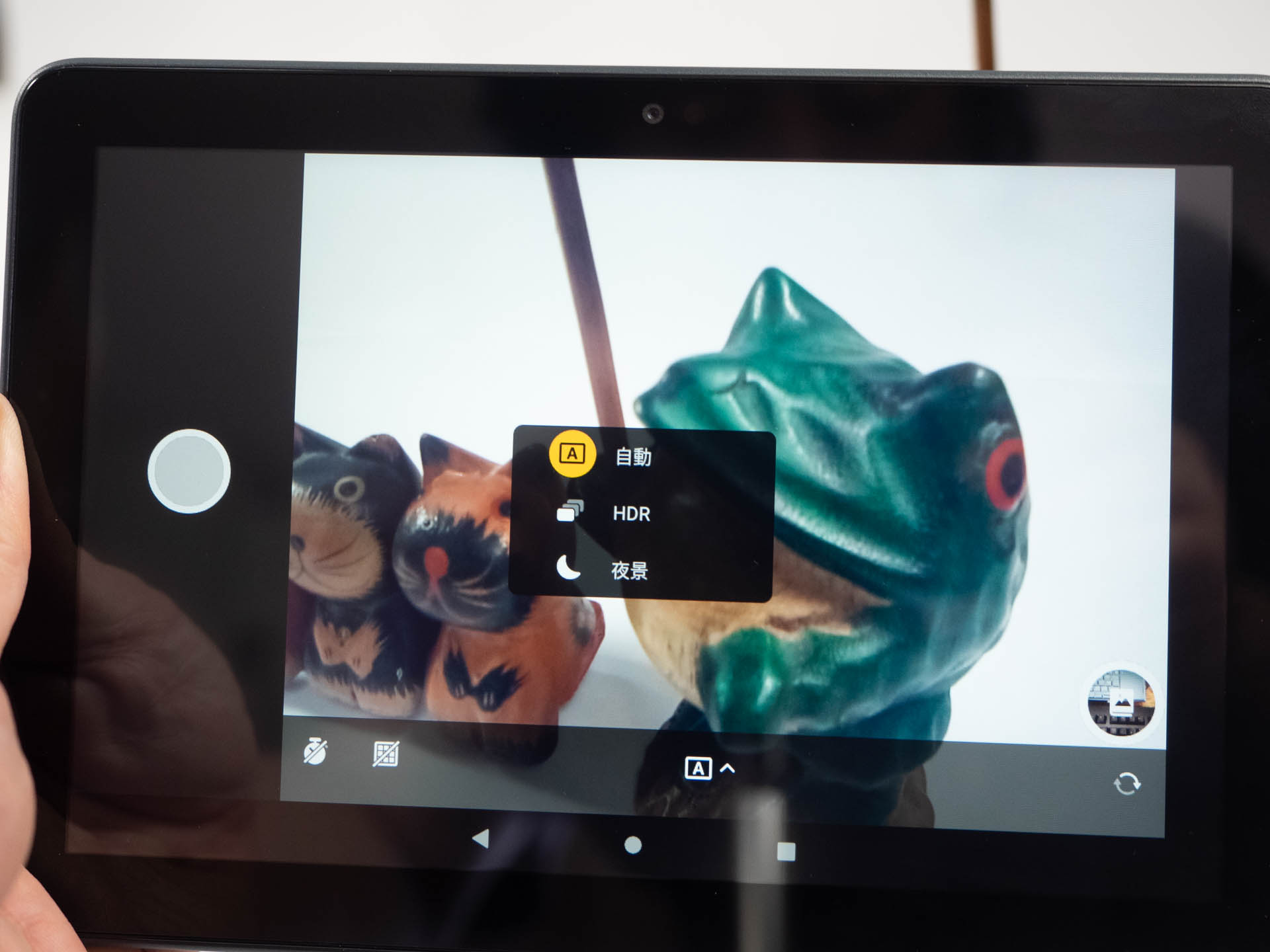 ▲ It has night and HDR photography modes 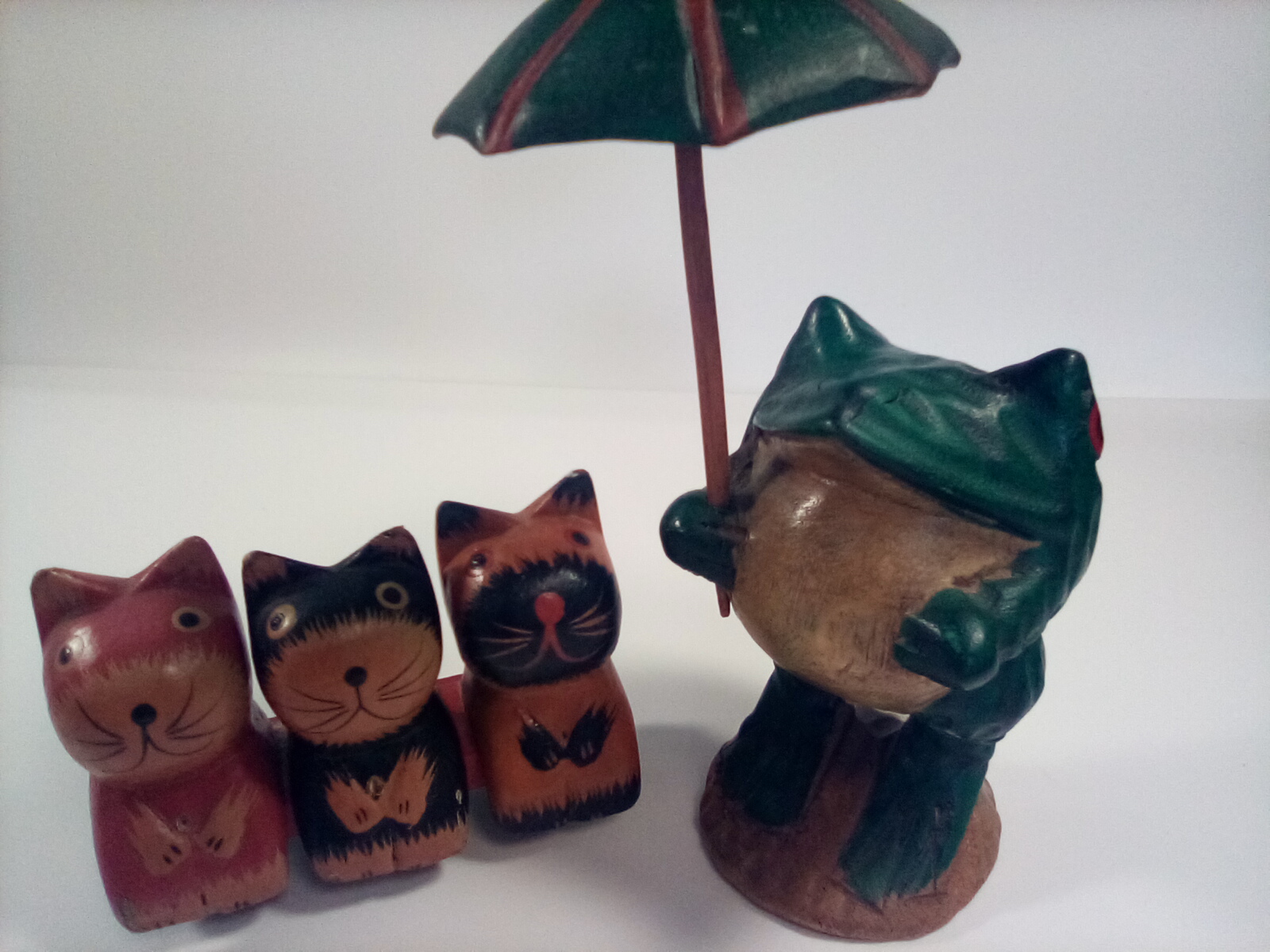 ▲ A picture I took on the Fire HD 8 Plus

Also, it supports dual band Wi-Fi in the a, b, g, n, and ac standards. It’s great that it supports the high speed 5GHz ac standard. It doesn’t support the latest Wi-Fi 6 (ax), but you can expect a stable connection if you have a good network.

Unlike some super cheap Chinese tablets that are so slow it’s frustrating, the Fire HD 8 Plus feels like you get more than you pay for. It boasts great value for the money. I would recommend it as an easy to use tablet to use around the house or in bed.